The Criterion Collection // Unrated // February 16, 2010
List Price: $39.95 [Buy now and save at Amazon]
Review by Stuart Galbraith IV | posted February 17, 2010 | E-mail the Author
Though its title character remains stubbornly enigmatic throughout, Lola Montès (1955) is a must-see for its indescribably gorgeous cinematography and innovative narrative structure. For those unfamiliar with the picture and the career of German-born director Max Ophüls - whose last film this was - Lola Montès resembles a continental Powell and Pressburger film; though filmed in early CinemaScope, a process fraught with technical limitations, Ophüls achives a kind of visual opulence normally associated only with three-strip Technicolor, and films like The Red Shoes and The Tales of Hoffmann. It's a dazzling if emotionally remote achievement.

Like George Cukor's A Star is Born, released at about the same time, Lola Montès was taken out of Ophüls's hands and ruinously recut soon after its premiere. However, a multinational effort in 2006 restored the film to its original elegance, and Criterion's Blu-ray release is incredibly beautiful. A restored multi-track stereo soundtrack adds to the experience, while the usual feast of extra features helps the viewer put it all into context. It may only be February, but this is sure to make the short list of the year's best releases. 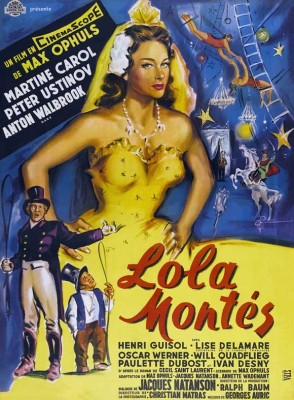 The film tells the story of Lola Montès (or, Lola Montez), a real-life 19th century femme fatale born Eliza Gilbert in Ireland in 1821, who as a Spanish dancer and actress became a courtesan-mistress to a string of famous lovers including (supposedly) Franz Liszt and, finally, King Ludwig I of Bavaria, who made her Countess of Landsfeld. The film begins late in her life, when after Ludwig's abdication she's reduced to headlining an American circus, complete with blackface minstrals and one performer dressed as Uncle Sam. A deathly ill Lola (Martine Carol) appears in garish and beautiful recreations of her affairs, complete with performing acrobats, clowns, etc., while a bombastic ringmaster/proprietor (Peter Ustinov) narrates the story of this "bloodthirsty woman with the eyes of an angel." The film alternates between these circus-set recreations and dream-like flashbacks.

Eventually, Lola finds happiness, genuine love, with Ludwig, but her scandalous celebrity precedes her - no one can believe she could really love the old, foolish king, and by the time she appears in Ustinov's circus Lola has become something of a joke, a freak show curiosity. The circus scenes are like nothing in cinema, beautiful and nightmarish at once, Powell/Pressburger's The Red Shoes meets Nobuo Nakagawa's vision of Hell in Jigoku, visually like being trapped inside a kaleidoscope.

Though attractive with a personal life mirroring Lola's in many ways - multiple marriages, public scandals, drug use, etc. - Martine Carol makes a emotionally remote, psychologically elusive Lola Montès. Perhaps Ophüls thought he was being clever, casting a second-rate actress as a second-rate actress, a mannequin playing a mannequin, and some would argue keeping Lola at an emotional arm's length was the whole point. But Carol is as static as a painting throughout and, try as the viewer might, it's impossible to get inside her head to get a handle on her motives, desires, and emotions. For that matter, neither is it really clear just what it is about Carol's Lola that so captivates the most famous men in Europe. Carol is cold and distant when an Ava Gardner-esque earthiness or at least a Faith Domergue-esque exoticness is called for.

That said, the film is uniquely stunning visually, with the kind of super-saturated colors one associates with original nitrate prints of three-strip Technicolor movies, the kind of hues that make the viewer's eyes water from over-stimulation. Given all the problems with early CinemaScope (distortion, poor color and focus), that Lola Montès looks as good as it does is nothing short of amazing. Ophüls uses a number of signature devices to good effect, such as myriad extended backward dollying shots (a device later favored by Stanley Kubrick) and an interesting use of masking off portions of the frame in blackness to draw particular attention to (usually) the middle-third of the frame. Ophüls also adds much depth to the image by frequently placing objects - glass, particians, house plants, and other obstructions - between the camera and characters.

A French-German co-production, Lola Montès was made on a scale comparable to Hollywood's early CinemaScope spectacles (though it looks much more expensive than its reported $1.5 million budget), and simultaneously filmed in French, German, and English, though the French version - in its original form - incorporates some German and English as well. This restored French version preserves the original performances, and native English-speaking Ustinov and German Oskar Werner (as a young Bavarian student) speak French perfectly well so this is not an issue.

Needless to say, this release makes the 1999 Fox-Lorber DVD release garbage bin-worthy. The 114-minute premiere version was cut in 1956 to 110 minutes, and then further cut to 91 minutes after that, with the flashback structure largely abandoned and the film told in straight chronological order. A 1966 reconstruction (nine years after Ophüls's death) was a start, but the film's color and stereophonic soundtrack, among other things, would not be fully reinstated until its 2006 restoration. Criterion's Blu-ray, in a 2.55:1 aspect ratio, is simply gorgeous, perhaps not as flawless as Fox's restoration of The Robe (1953) but the cinematography of Lola Montès is far more ambitious and dazzling. The restoration team was able to use the original YCM color separations (from an incomplete rough cut) and that seems to have made all the difference. The four-track magnetic stereo sourced is not as robust as the early Hollywood CinemaScope films and has less directionality, but it is very impressive nonetheless, and the music by Georges Auric benefits here the most. The film is preceded by the restoration credits.

Included is an excellent audio commentary with Ophüls scholar Susan White that covers a lot of ground, from the film's stormy production and release to literary readings of the film itself. "Max Ophüls ou le plaisir de tourner" is a 50-minute tribute from 1965, from the French television program Cineastes de notre temps; it mixes awful-looking clips from the film and interviews with various collaborators, including actress Carol. Marcel Ophüls directed Max by Marcel, a new short documentary (in high-def) about this father. It's terrific, with lots of rare footage and good interviews. Also included is brief silent but color film footage of Martin Carol wearing wigs from the film, and a beautiful high-def theatrical trailer touting its Rialto Pictures re-release (this is a good one to show guests!). A booklet includes an excellent essay on the film by Gary Giddins, and some details about the restoration.

Lola Montès is something of a challenge and not entirely satisfying, but visually the picture is one-of-a-kind, a real feast for the eyes, and Ophüls's approach to the material keeps it fascinating throughout. A DVD Talk Collector Series title.