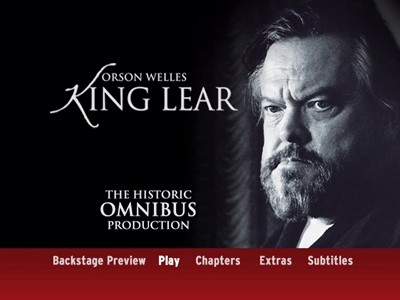 The Omnibus TV show ran from 1952 through 1961, earning a reputation as television's premiere arts program. The magazine-style show, hosted by Alistair Cooke, cobbled together 90 minutes of programming each week, covering various topics and showcasing quality performances from across the entertainment field.

In 1953, the show staged an ambitious production of King Lear. It was directed by Peter Brook, perhaps the most esteemed Shakespearian director of his time, and movie legend Orson Welles was signed on to play Lear. Little seen since, this new DVD gives us an impressively restored transfer of the Kinetoscope recording of the live broadcast. Filling the full Omnibus running time, it's a trimmed down staging of one of Shakesepeare's most revered and mature scripts. Brook cut out all the fat, ditching any subplots that didn't directly follow Lear, moving efficiently from the aging monarch dividing his kingdom, through his madness, and to his death.

The excisions work, and the story still flows without the extra business of the Earl of Gloucester and his son--but then, one worries little about the quality of the writing in a Shakespeare play. Any retelling of a play like Lear really rises and falls on the performances and the staging. In this case, the production is not limited by the confines of one stage, but since it is still performed live, it does not have the full advantage of the time and mobility provided by motion pictures. Brook jumps into the television arena with both feet, creating a variety of large sets that effectively find the middle ground between complexity and openness. He works out how to allow multiple cameras in the performance space while still having backgrounds that look good. He wrangles a large cast, and moves between scenes without making the transitions or pauses obvious. His portrayal of the raging weather that reflects Lear's dwindling sanity is also quite impressive. We see Peter Brook at the end of the show, saying good-bye to Alistair Cooke, and it's clear he's exhausted. As one would be running at full speed for 90 minutes.

Orson Welles as Lear is not the triumph that one might hope. Though he eventually achieves some wondrous heights by the end of the show, he starts off pretty low. Burdened by some terrible old man make-up and one of the worst false noses I've seen (and knowing Welles, he probably perpetrated these things on himself), he spends the bulk of the first act as a corpulent lump of moodiness. In between brooding and growling out demands, Welles stares into empty space, looking like a cranky manchild who needs a nap. There is no sense that this is a great man making a mistake. Welles's Lear is just a jerk.

The actor is clearly more comfortable with the blustery concoctions of the second and third acts, and when an enraged Lear has his psychotic break, hammy Orson emerges to take over your television screen. His finest moment comes when he is reunited with the blinded Gloucester (Frederic Worlock) and delivers the "Ay, every inch a king" speech. Brook zooms in on Welles for this, and Welles makes the most of his close-up. His eyes bulge and roam, his lips quiver, and he's generally not afraid to go over the top. His character is, after all, insane.

Moments like these string together an otherwise dry program. With the exception of the blinding of Gloucester, any scene away from Lear is a snooze. There is also too little of the Fool, though Alan Badel's strange mix of taunting jokes and quivering fear makes him the highlight of the first act. He dances around the sedentary Welles like some kind of Salome trying to make the King's blood boil. Maybe he has the right idea, because it does eventually help the old man to get out of his chair.

The Omnibus adaptation of King Lear doesn't quite fit into the revered pantheon of Welles' own Shakespearian productions (when are we going to get Macbeth and Chimes at Midnight on DVD in North America? Or have Othello return to print?), but King Lear is still an interesting glimpse at how the actor handled one of the bard's juiciest parts. Fans should be pleased at having a quality go-to version, even if the program itself falls a little short. 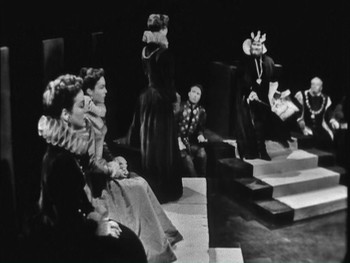 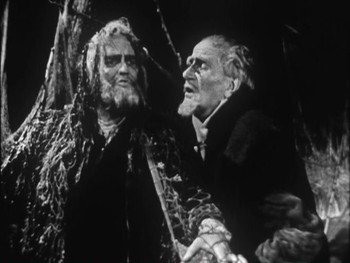 Video:
The DVD transfer of King Lear was made from a Kinetoscope of the original live broadcast; in other words, a film made from placing a camera in front of a monitor and shooting the live feed. The version here, preserved by the Archive of American Television, has been well taken care of. The fullscreen, black-and-white image is clear, there is very little by way of scratches or dirt, and hardly any glitches at all. I've seen a lot of live TV on DVD lately, and this is one of the best looking transfers I've come across.

Sound:
The mono mix is very clear, with only a small amount of hiss. Welles's stentorian tones have been excellently preserved for the ages.

Extras:
Like all of the E1/Archive of American Television discs, King Lear comes with a 14-page booklet giving production credits and providing extensive liner notes on the programming.

Additionally, there are several bonuses on the disc itself. The first is a short "Backstage Preview," a segment that aired the week prior to King Lear, teasing viewers of what was to come by having Alistair Cooke visit Peter Brook during rehearsals. Welles is notably absent, with excuses made that to unveil him before the big show would be something akin to seeing the bride before the wedding. Knowing Welles, he was off doing something else at the time, though the liner notes do say that he behaved fairly well during the lead-up to the broadcast.

The rest of the extras are a trio of other Shakespearian segments from Omnibus, running about 25 minutes all told. They include a discussion of the Globe Theatre filmed in 1953, a live report from the Yale Shakespeare Festival from 1954, and a peek at a staging of Hamlet from 1955.

FINAL THOUGHTS:
I had high hopes for seeing Orson Welles in King Lear, and though this 1953 television production doesn't really meet them, it's still Recommended. Welles is slow to start, but he eventually gets the feel of Lear's blustery day and ends up being quite good shouting at the scenery. Peter Brook's staging of the play is hit and miss throughout, with some scenes working very well and others falling kind of flat, but overall, this rare live broadcast is worth a look for fans of the play or its star. 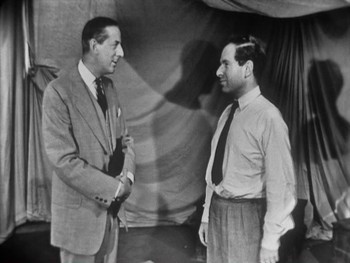 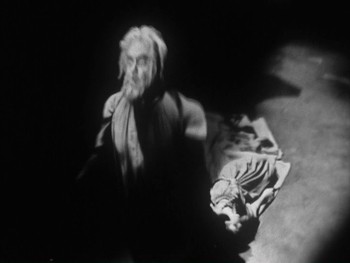