AnimEigo // Unrated // January 12, 2010
List Price: $24.98 [Buy now and save at Amazon]
Review by Stuart Galbraith IV | posted January 4, 2010 | E-mail the Author
Japanese director Hideo Gosha (1929-1992) specialized in yakuza stories and samurai dramas, and while he isn't quite as well known as, say, directors Kinji Fukasaku or Seijun Suzuki, his films are arguably superior. For one thing they tend to be much more polished and carefully crafted than Fukasaku's and less distractingly pretentious than Suzuki's. And, more to the point, Gosha's movies are subtly unique, unlike those of any other Japanese filmmaker. He's at his best doing pictures like Onimasa - A Japanese Godfather (1982) - epic and engrossing portraits of a yakuza or samurai clan's rise and fall over several decades, films that tend to be hugely critical of bushido and supposed yakuza chivalry while simultaneously romanticizing that way of life. His best films most remind this reviewer of Francis Ford Coppola at his peak - Gosha's Hunter in the Dark and this have more in common with Coppola's Godfather trilogy than, say, Fukasaku's Battles without Honor and Humanity films.

AnimEigo's DVD offers a beautiful 16:9 enhanced transfer of the film, supplemented with the usual program notes, bios, trailers and the like. 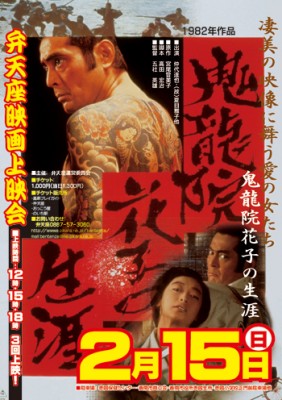 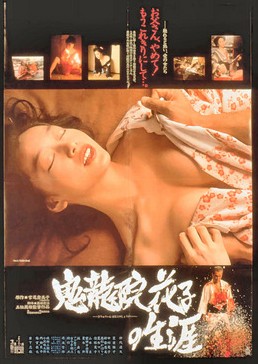 Onimasa was based on a novel by Tomiko Miyao; the title of both the book and the film was Kiryuin Hanako no shogai ("The Life of Hanako Kiryuin"). However, in the movie version at least Hanako is a minor if pivotal character. The film version opens in 1940, with Matsue (Masako Natsume) learning of the ignominious death of her half-sister, Hanako (Kaori Tagasugi), while miscarrying.

The rest of the film is told in flashback, beginning in 1918 when as a 12-year-old Matsue (played at this age by Nobuko Sendo) and her kid brother are taken from their poor family and "adopted" by local yakuza boss Masagoro Kiryuin (Tatsuya Nakadai), known to all as Onimasa, and his intimidating, icy wife, Uta (Shima Iwashita). The brother soon runs away, never to return, but Matsue gradually adapts to life in the prosperous but still bush-league yakuza family. Onimasa, a big blowhard of a patriarch who fancies himself not so much a yakuza per se but rather a "chivalrous" man, keeps several mistresses while sex-starved Uta rules the household with an iron fist.

Several subplots unfold at a leisurely pace. At the dogfights - shown with uncomfortable realism - Onimasa argues with members of the Suenaga clan over a controversial bout, leading to a decades-long blood feud. Onimasa's gang eventually kidnaps Tsuru (Akiko Kana) and he takes her as his new mistress. She eventually gives him a daughter, Hanako, whom he treats like a child well into her adulthood.

Onimasa unwisely sides with union strategist Kyosuke Tanabe (Kei Yamamoto) during a railroad strike - labor unions normally being the arch-nemeses of yakuza and a favorite target of their attacks and intimidation - and this puts Onimasa at odds with his own boss, Uichi Suda (Tetsuro Tamba). Later, Matsue and Kyosuke fall in love after she visits him in prison, but Onimasa's unhealthy possessiveness stands in the way of their desire to marry.

Onimasa isn't quite up to the level of Gosha's best though it is involving, has many fine moments, and several memorable performances. It was nominated for 10 Japanese Academy Awards, but the year was dominated by Fukasaku's popular Kamata March/Fall Guy and so Onimasa took home just one award, for its art direction. However, star Masako Natsume won a Blue Ribbon Award (another major domestic film prize) and her nomination by the Academy as Best Actress was just the first of three consecutive nominations in that category.

However, Natsume died of leukemia just a few years later, in 1985 at the tender age of 27. She was just beginning to make her mark playing the kind of idealized Japanese woman played in earlier generations by Setsuko Hara and Sayuri Yoshinaga and is still mourned by her legion of fans.

She's fine in Onimasa, as is Nobuko Sendo's performance as the younger Matsue. Mari Natsuki is memorable as the foul-mouthed femme fatale of the Suenaga clan, and perennial yakuza second banana Hideo Murata gives a nice, understated performance as Matsue's "Uncle." However, the larger-than-life performance by Tatsuya Nakadai and Shima Iwashita's terrifying one dominate the film.

One thing Nakadai definitely is not is restrained. As Onimasa, he's about as subtle as Charles Laughton in Abbott and Costello Meet Captain Kidd. It's hard to tell if Nakadai is merely being outrageously hammy or if perhaps he's deliberately positing Onimasa as a swaggering fool, rather like the idiot samurai characters Toshiro Mifune played in Samurai Assassin (1965) and Red Lion (1969). One thing for sure is that Nakadai isn't ideally suited to this part, and I suspect his way-over-the-top performance is both a conscious decision and a kind of gleeful hamminess, not necessarily a bad thing. Nakadai was the go-to guy for internally tortured characters (as in Kobayashi's Human Condition trilogy) or, with those zombie-like saucer eyes of his, psychotic characters (as in Yojimbo and The Sword of Doom) but, as with a few other films, like Kurosawa's Kagemusha, Nakadai is not really a good match for the role - a Shintaro Katsu or Bunta Sugawara would seem like better casting choices. (Nakadai even wears a Sugawara-esque crew cut with loud, Kunie Tanaka-style sideburns.)

Shima Iwashita, on the other hand, is very good as the spiteful Uta, the antithesis of a nurturing mother. It's a three-dimensional characterization, emotionally real and unnerving.

As with other Gosha films, Onimasa is both unflattering in its depiction of yakuza family life while still romanticizing it by the end. For instance, Onimasa, whom it's implied is at best semi-literate, tries to deny Matsue an education even after she passes a prestigious high school's entrance examination, and later he tries to rape her when she threatens to leave the family (and, specifically, him) to marry Tanabe.

And yet a strange elegiac quality takes over by the end. It doesn't quite work, but there's a kind of implication that, warts and all, the Kiryuin-gumi is the family life has dealt her, and that despite her adopted parents' myriad failings, they and their gang are all she has.

Supplements include four 16:9 enhanced and fully subtitled trailers for the film, which alternate between emphasizing the yakuza-thriller aspects and the picture's graphic sex scenes - several Big Name actresses bare all in this: "The women are hot and the men are on fire!" scream the ads. Also included are AnimEigo's usual program notes (annotating historical and cultural references), brief but informative biographies, and a good image gallery.

Though a notch below director Gosha's best films, Onimasa - A Japanese Godfather is a satisfying, engrossing yakuza drama with much to recommend it, and AnimEigo's great transfer make it a pleasure to watch.