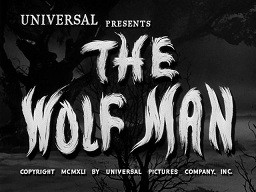 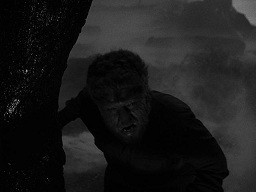 Universal has always been kind on home video to their stable of classic monster movies produced between the 1930s and 1950s. In 2000, just as the DVD medium became popularized, for instance, the studio released extras-laden discs of eight of their most well-known horror titles. Among these, of course, was the 1941 The Wolf Man, reviewed back then by DVD Talker Chuck Arrington, who awarded that release our highest recommendation: DVD Talk Collector Series. Double feature discs soon followed of many of these films' sequels. Then, in 2004, Universal collected most of these movies into fantastic 2-disc Legacy Collections, timed to coincide with their theatrical release of the iffy action-adventure rehash Van Helsing. Among these legacy collections, again, was The Wolf Man and its sequels. Starting in 2006, Universal began triple-dipping into their monster vault - in a welcomed manner - with 2-disc Universal Legacy Series releases of Dracula and Frankenstein, sporting a ton of extras, some of them new. 1932's The Mummy followed in 2008, timed to coincide with the theatrical release of The Mummy: Tomb of the Dragon Emperor.

It's now 2010, and Universal now offers up a Universal Legacy Series edition of The Wolf Man, timed to take advantage of the soon-to-be-released remake starring Benicio Del Toro and Anthony Hopkins. Like previous editions in this Legacy Series, the packaging is terrific. The Wolf Man arrives in a nice-looking clamshell with a well-done cover depicting Lon Chaney Jr. in wolf man attire howling at a full moon. The DVDs are housed in clear plastic inside, with a still of the monster lurking in the fog-covered moors behind as background. All around, it's an eye-catching product.

As for the movie itself, what can I say about The Wolf Man that hasn't already been said in the near-seventy years since its initial release? It's a great film, and certainly one of the best in the classic Universal monster series (and that's saying something, considering the likes of Frankenstein, Dracula, etc. etc.). I grew up with these movies as they aired seemingly endlessly on Saturday afternoons on TV. I distinctly remember watching The Wolf Man as a child and really enjoying it. It's not the same experience as an adult, of course, but that doesn't mean that it loses its appeal thanks to maturity in its audience. There are just other things to appreciate about the movie aside from its juvenile monster-ness.

For those unfamiliar with the movie, The Wolf Man tells the story of Larry Talbot (played by classic monster star Lon Chaney Jr. in a career-defining role), who returns to his ancestral home after the death of his older brother. He is reunited with his stern father (Claude Rains) and falls in love with a local shopkeeper's daughter (Evelyn Ankers). One night, however, Talbot comes to the rescue of a local woman attacked by a wolf in the moors. Talbot gets the better of the wolf but is bitten beforehand. As contemporary werewolf mythology dictates, this means Talbot is cursed to become a wolf man as well. The inevitable monster mayhem ensues, often set in a moodily atmospheric fog-shrouded barren forest.

One thing I appreciate more about this movie now than I did as a kid is its cast. Lon Chaney Jr. is just really, really good in this role. He evokes a lot of sympathy - and plays the conflicted Larry Talbot convincingly. Surrounding Chaney Jr. is a very strong ensemble. Claude Rains, while not bearing a strong physical resemblance to Chaney Jr., is effective here as the patrician father. This is Rains' best role in a Universal monster film. I say that not to disparage his lead roles in The Invisible Man (which would have better suited Colin Clive, I think) and The Phantom of the Opera (where he was good but lacked the menace necessary for the role) but to suggest that this supporting role was better suited for his demeanor. Other major Universal players here include 1940s "scream queen" Evelyn Ankers, who was always good at playing scared (which is basically her role here), and Maria Ouspenskaya, who plays a travelling gypsy sympathetic to Talbot's plight. Even horror legend Bela Lugosi gets a good turn here as the gypsy responsible for Talbot's condition - even if his role is limited to little more than a cameo.

Other things to appreciate are the well-conceived settings, especially the afore-mentioned foggy forests. And what more can be said about Jack Pierce's artistry? Pierce was a legend in the industry, meticulously creating the elaborate makeup for several of the classic Universal monsters like Frankenstein and The Mummy. Here, he doesn't disappoint, with a wolf man creation that took hours and hours to apply (as covered in some of the film's extras - more on these in a bit) and worth every minute, as its details onscreen demonstrate.

All in all, The Wolf Man is a breezy 70 minute horror film delight. The black-and-white image only adds to the film's mystique (Universal has very wisely kept itself from colorizing the movie - something that is anathema, I think, to the enjoyment of these old classics). It is a bit dated, especially with its dating mores (no pun intended - just an observation on how much gender and relationship roles have changed in the intervening seven decades), but it's a film that can be enjoyed by kids and adults alike - and I highly recommend it.

As I mentioned at the start of this review, the original DVD release of The Wolf Man received a "DVD Talk Collector Series" status when it arrived in stores a decade ago. This new Universal Legacy Series edition only improves upon that first disc - and I have no problem at all in keeping with a "DVD Talk Collector Series" recommendation for this go-round. My only reservation would be that monster fans might prefer the previous 2-disc incarnation of The Wolf Man in its Legacy Collection series, as that sacrifices extras for three additional werewolf-themed films produced by Universal, including The Wolf Man's direct sequel: Frankenstein Meets the Wolf Man.

Universal advertises this release of The Wolf Man as having "a digitally remastered picture." This does seem to be an improvement over the previous two home video releases; however, the difference is negligible, especially to the casual viewer. The image is sharp for a black-and-white film of its time period, and its full frame (1.33:1 aspect ratio) presentation, in keeping with the other Universal monster classics from this era, likely represents its original theatrical exhibition.

The lone audio track is a serviceabe Dolby Digital 2.0 Mono affair. Dialogue and the score come across strongly. Overall, it's a warm if unremarkable (by today's standards) audio track. Optional subtitles are available in Spanish, French, and English (subtitled for the deaf and hard of hearing). 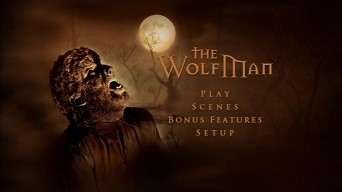 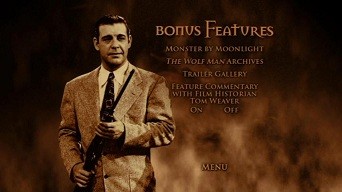 Disc I of this Universal Legacy Series release of The Wolf Man ports over many of the extras from the previous two home video editions of the movie.

For instance, there's Monster by Moonlight (32:35), a very good documentary on the making of The Wolf Man hosted by John Landis. In addition, The Wolf Man Archives (6:45) provides a slideshow of original stills and promotional art set to segments of the film's score. Both are presented in full frame.

The best extra, though, is arguably film historian Tom Weaver's feature-length commentary track, originally recorded for the first DVD release of The Wolf Man. Weaver is thorough in his research - and his commentary is excellent at providing background on the movie's making.

Finally, a Trailer Gallery houses trailers for The Wolf Man, Frankenstein Meets the Wolf Man, Werewolf of London, She-Wolf of London, and, unsurprisingly, The Wolfman (2010). They can be played individually or collectively with a Play All option. 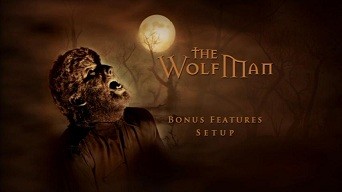 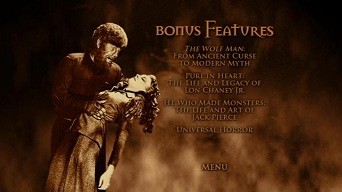 Disc II of the Universal Legacy Series release of The Wolf Man has four additional extras:

Universal Horror (1:35:16) is the classic 1998 documentary on the history of the classic Universal horror films narrated by Kenneth Branagh. It's an excellent primer on these iconic movies for the novice, but it's in-depth enough to be of interest to horror film fanatics. Yes, it's appeared on several other Universal releases, but it's a welcome addition here as well. This documentary is given a full screen presentation that likely represents its original aspect ratio.

Next up is He Who Made Monsters: The Life and Art of Jack Pierce (25:00), an anamorphic widescreen tribute to makeup artist Jack Pierce, focusing upon his iconic work for Universal studios in the 1930s and 1940s. It's a good featurette with comments from a number of experts and filmmakers. It previously appeared on the Universal Legacy Series edition of The Mummy.

Pure in Heart: The Life and Legacy of Lon Chaney Jr. (36:50) is the first new extra on disc two. It's an affectionate overview of the actor's life and career - and has the participation of numerous film historians, critics, filmmakers, and actors. This extra is also anamorphic widescreen.

Rounding out the extras on this disc is The Wolf Man: From Ancient Curse to Modern Myth (10:07). This short feels like a continuation of the Pure in Heart biography, except here many of the same commentators discuss werewolf mythology. I half-expected this to tie-in with the Benicio Del Toro remake arriving in theaters this weekend, but no mention of the film is to be found here.

Before I wrap up this review, it should be noted that some outlets are adding additional extras to this new release of The Wolf Man. Wal-Mart, for instance, includes a code for $10 in movie cash to see the remake in theaters.

The Wolf Man is one of the most popular and enduring horror movies from the 1940's. Lon Chaney Jr's career-defining performance as the titular monster is terrific. It's hard to recommend this new Universal Legacy Series edition over the still-available Legacy Collection version since that has three additional films included with it. However, it is definitely an upgrade over the original DVD release of this classic, which received a "DVD Talk Collector Series" rating upon its release a decade ago, and considering its wealth of extras (and terrific clamshell packaging), I have no reservations in keeping with that same recommendation for this new release.