Clash of the Titans

Warner Bros. // PG // March 2, 2010 // Region 0
List Price: $34.99 [Buy now and save at Amazon]
Review by Stuart Galbraith IV | posted March 9, 2010 | E-mail the Author
The last movie to feature stop-motion animation effects by living legend Ray Harryhausen, Clash of the Titans (1981), is a decidedly mixed bag, playing much like any of his films but classed up a bit with better production values and pricey actors while unfortunately sucking a lot of the simple pleasures out of it at the same time. Film fans have enormous nostalgia for Harryhausen's earlier work, films like The Beast from 20,000 Fathoms (1953), The 7th Voyage of Sinbad (1958), Jason and the Argonauts (1963), and One Million Years, B.C. (1967), but I don't know anyone whose favorite Harryhausen movie is Clash of the Titans, this despite the fact that it was by far the most expensive movie of his career and his biggest commercial success. For a time Harryhausen's career was damaged by the sudden influx of inexpensive peplum, so-called "sword and sandal" movies from Italy which Harryhausen intensely disliked, and yet his always entertaining effects work often inhabited films that weren't much better.

The shortcomings found in almost all of Harryhausen's films have traditionally been blamed on his longtime producing partner, Charles H. Schneer. In reality, the limitations of Harryhausen's movies are as much and probably even more the fault of the animator rather than Schneer, mainly because Harryhausen stubbornly resisted changing with the times technologically as well as with the tastes of his loyal audience. That said, Clash of the Titans still features some of his best set pieces, and the film is generally okay, if overlong and extraordinarily clunky.

A Blu-ray edition of Clash of the Titans was announced during the format's infancy but then pulled from the schedule. It was a supremely odd choice for high-def release because even in the best possible light it's one of the ugliest-looking movies from the early-1980s - extremely grainy and soft-focused with at times painfully obvious process shots. It's out now solely to ride on the back of Warner Bros.'s big-budget (and CGI) 3-D remake, which is heavily promoted in the packaging and on the disc itself. 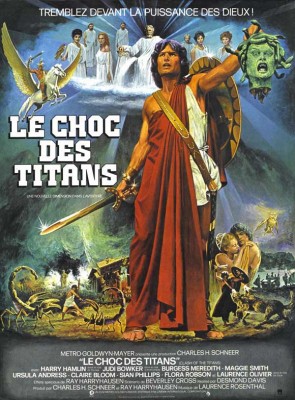 The 1981 film follows the adventures of Perseus (Harry Hamlin), the illegitimate son of the god Zeus (Laurence Olivier) and Danaë (Vida Taylor), daughter of King Acrisius (Donald Houston in his last film). The meandering script is by Beverley Cross, which has characters constantly introducing themselves, helpfully adding little details like where they're from and to whom they are related, all for the benefit of the audience. Mostly it follows Perseus and his efforts to save the Princess Andromeda (Judi Bowker) from being sacrificed to the Kraken, an apparently wayward monster in Ancient Greece given its Scandinavian origins. Jealous goddess Thetis (Maggie Smith, Cross's wife) conspires with her son, the cursed half-human Calibos (part-stop motion, in close-ups played by Neil McCarthy), while Perseus, aided by doddering playwright Ammon (Burgess Meredith) and a mechanical owl, Bubo, search for the only means to stop the Kraken - the severed head of Medusa, thus setting one titan against another.

Forgiving critics at the time rightly pegged Clash of the Titans as a kind of last hurrah, a nostalgic return to an older style of moviemaking all but extinguished after the success of Star Wars a few years before. Though several new Harryhausen-Schneer projects went into development after Clash of the Titans, including Sinbad on Mars and the regrettably-titled Force of the Trojans (tee-hee!), not long after Clash's premiere Harryhausen announced his retirement.

I remember when this came out and virtually dragged some friends of mine to see it, promising them something akin to The Golden Voyage of Sinbad or perhaps Jason and the Argonauts. However, the movie's first special effects turned out to be awesomely bad: a seagull so shoddily optically inserted into an aerial shot the bird appeared black instead of white, and transparent when it should have been opaque. My friends thought it was hilarious, and I slowly sunk in my seat.

After his success with The 7th Voyage of Sinbad, Ray Harryhausen exerted much more control over his pictures, perhaps understandably from his perspective wanting them to serve as showcases for his animation, even at the expense of things like drama and characterization. Moreover, because he regarded himself rather than his films' writers and directors the true auteur of his movies, he favored reliable traffic cop-types like Nathan Juran and Beverley Cross to direct and write films that worked around his effects, and not the other way around.

That's the big problem with Clash of the Titans, which has more effects set pieces than any other Harryhausen film, but also falls way short in terms of characterization and has almost no momentum. In the past, these shortcomings were balanced by other attributes, such as an engaging leading man or sweeping musical score (e.g., star Kerwin Mathews and composer Bernard Herrmann on The 7th Voyage of Sinbad), a fundamentally strong story (Mysterious Island) or atypically inventive direction (Don Chaffey on One Million Years, B.C.). Unfortunately, while Clash of the Titans has some great (and not-so-great) stop-motion sequences, it has none of these other things.

As Perseus, Harry Hamlin is simply unexpressive, a far cry from his character on the later L.A. Law, though Judi Bowker is both a good performer and her childlike innocence perfectly suited to the character.

On the other hand, the pricey actors hired to impersonate the Greek Gods don't at all pay off. The movie isn't any better because Claire Bloom tosses off a few lines as Hera, Zeus's wife, or because Ursula Andress turns up, appropriately cast but wasted as Aphrodite. Laurence Oliver's notably fragile Zeus - he speaks breathlessly throughout, like he's just run up 20 flights of stairs - is pretty embarrassing, though it's as much Cross's conception of the character as it is Olivier's take-the-money-and-run performance. In his script, Zeus is like an obsessive collector of action figures, jealously lording over his collection and petulantly refusing to let the other gods play with his toys.

The film works best in its action set pieces. The confrontation between Perseus and Medusa is outstanding, maybe the best single sequence of Harryhausen's career, and a triumph not only of stop-motion but also of miniature lighting, always crucial in the success of such things, and an area usually overlooked even by Harryhausen's admirers.

Calibos is a different sort of success in that Harryhausen carefully integrates the stop-motion figure with the live action, and the cutting between the model and the actor is always obvious but effective with minimal suspension of disbelief. The Kraken, which should be the film's highlight, instead is a disappointment, resembling as it does a waterlogged Ymir (Harryhausen's Venusian from 20 Million Miles to Earth) with jointless arms, and the scale of which never convinces. (The giant octopus in It Came from Beneath the Sea, for instance, is much more effective.)

At the time, Harryhausen was criticized for his R2-D2-like mechanical owl Bubo, which he always claimed was created prior to Star Wars' release. But inasmuch as Bubo's function is nearly identical to Cheeta in the Tarzan movies of the '30s onward, Harryhausen's claims don't seem unreasonable.

Clash of the Titans' packaging ominously notes, "This film has been remastered utilizing state-of-the-art digital technology while maintaining the visual appearance of the original theatrical release." This is an absolutely true statement; indeed, the film looks better than I remembered it in a theater back in 1981. Presumably this disclaimer is to ward off complaints about the picture quality that is, admittedly, not the greatest. Popular as Harryhausen's movies are, in high-definition shifts in grain between Harryhausen's composites and straight cuts only becomes more obvious: Hey! There must be an effect coming up because everything suddenly got grainy all of a sudden!

On Clash there may have been a deliberate effort to hide this somewhat by shooting as much of the film as possible in soft focus with fast, grainy stock. Even in the non-effects sequences, the image is so soft at times it actually looks inferior to the (excellent) Blu-ray of the Pride and Prejudice miniseries, and that was filmed in Super 16. Add to that, it seems like at least half the film's effects scenes take place in dark caves or at night; the overuse of day-for-night photography may have been another attempt to hide the graininess of the composites, but it must've wreaked havoc on drive-in screenings.

The 2.0 DTS-HD Master Audio features surprisingly lively use of early Dolby Stereo, though one line of dialogue is curiously missing: at 12:07, after a shot of a naked Danaë strolling down the beach there's a cut to Zeus who opens his mouth but his line is not heard on the soundtrack ("She's a honey?"). 1.0 tracks in French, Latin and Castilian Spanish, and optional subtitles in all those languages are included. My disc defaulted to Japanese menu options on my purchased-in-Japan PlayStation 3.

Supplements are limited to a single standard-def extra ported over from the August 2002 DVD, a typically unilluminating interview with Harryhausen himself. There's no trailer this time out, but there is a five-minute promo for the new remake that's in high-def. It doesn't make me want to see the movie, but I was impressed by how much Liam Neeson is made to resemble Olivier's Zeus in this.

Despite all the bellyaching, Warner's Blu-ray of Clash of the Titans is a big improvement over the 2002 DVD edition, though its high-def image does have the effect of enhancing its visual flaws. Still, as a Ray Harryhausen fan myself, I wouldn't miss this for the world, even though it's one of his least satisfying if most successful films. Recommended.