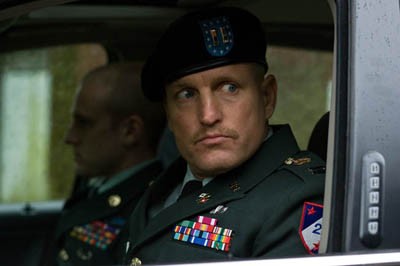 After watching Oren Moverman and Alessandro Carmen's film The Messenger, I've got a new candidate for "job I'd least like to have": employee of the Army Casualty Notification Service. These are the guys sent out to the next of kin (N.O.K.) of fallen soldiers to let them know that their brothers, sisters, husbands, and wives, sons and fathers and daughters and mothers, have been killed in action. Day-in, day-out, whenever the news hits, they are sent to the homes of the unsuspecting family members to try to deliver the information before it arrives by any other means. I can't even imagine how devastating the cumulative effect of time on this job must be.

Though I guess I don't have to imagine, because The Messenger does a pretty good job of showing us that. The film stars Woody Harrelson as Tony Stone, a recovering alcoholic whose been doing this duty for a while, and Ben Foster as Will Montgomery, an officer just back from Iraq who has a few months service to fulfill. Will saw some action overseas, and a deadly battle left him with his left eye damaged and a whole lot of mental scars. Throwing him into the deep end of grief may not have been the best idea. It only serves to remind him that he survived while others didn't.

As with any job of this nature, a gallows humor is required to get through it. Tony is a partier and a diarrhea-mouthed philosophizer. His gift of gab is like a pressure valve in between notifications, releasing the collected steam of the task. When approaching the N.O.K.s, he's all business. As he tries to impart to Will, the casualty officers must deliver the news as directly as possible, avoiding all ambiguity and definitely not getting involved in the situation. Stay on script and under no circumstances do you make physical contact with the bereaved.

Easier said than done. The examples of the job we see run the gamut of emotional scenarios, including an angry father (played by Steve Buscemi), a pregnant girlfriend, and an accepting, understanding wife. The latter is Olivia, played by Samantha Morton, a mother of one. The child's father was killed on his third tour, and she had come to expect tragedy, had abstracted her husband from her heart already. Part of this is because the war had changed the man, part of it is just necessity. Her steely resolve touches something in Will, and he begins to look in on her, almost to the point of stalking. He's mourning his own lovelife; his girlfriend (Jena Malone) found another man while Will was away. There is a compatibility to his and Olivia's grief. Neither of them really knows what they want from the other, but they are both patient enough to just let it be. 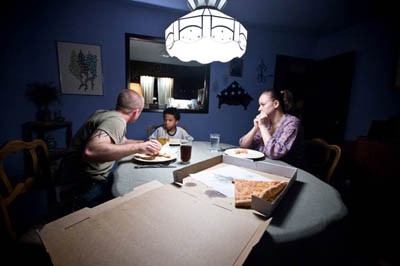 The Messenger could have easily been an overwrought drama, it certainly has the material for it, but first-time director Oren Moverman resists any urge to move his film into operatic stratospheres. Instead, he makes a movie with integrity, one that honestly examines the situation without trying to make anything out of it. These are just people getting by as best they can, there is no larger agenda, no point to make. His characters don't live their lives according to political divisions or literary themes, they are all just trying to survive in the worst of times. They muddle through in whatever way makes sense to them, and sometimes that means relying on one another to enable their messed-up impulses.

Moverman and his co-writer, Alessandro Camon, establish a quiet juxtaposition between the calm peace Will finds around Olivia and the full-blown chaos of Tony. Harrelson's powerhouse performance is a riveting construction of denial and pain. He and Will start off at odds, but eventually go off the cliff edge together and hike their way back. They both carry guilt for things done and not done, and while the uniform and procedure gives them something to lean on, eventually that stuff has to be shoved aside so the real dirty work of dealing with their problems can get underway.

Samantha Morton ends up being the emotional core of the movie. In her best roles, such as another grieving woman in the glacier-like Morvern Callar, she has a way of just "being" that transcends conventional acting techniques. There is nothing deliberate about her performances, it's almost like she's in a documentary and not aware that the rest of this cinematic world is fiction. The default for the female lead in a movie like this is for the woman to be an understanding mother who soothes the overgrown children by taking them to her bed. Moverman and Camon don't just avoid this cliché, they toss it out completely. Olivia's interactions with Will and the feelings they dredge up have a rich complexity that is far more satisfying than the usual 1-2-3 narrative convention.

By the end of The Messenger some things are fixed, some are left untouched, and others are in the process of being put right--just as it would be in real life. This makes for a more fulfilling ending than one where everything is perfect. There is more hope to be had in a work-in-progress, difficulty is truer than simplicity. Grand revelations and big swells of love and sentiment are false and thus fade as soon as the screen goes black, whereas a more considered, deeply felt movie like The Messenger sticks around. It's affecting and effective, rather than affected, and it's a film that deserves to be seen.