The concept behind Elvis Costello's Spectacle series is so simple, I can't believe no one has thought of it before, and so smart, you almost have to marvel that anyone is putting it on TV. The Sundance Channel series consists of fifty-minute programs with Costello and special guests sitting around and discussing music interrupted by marvelous performances with Elvis' band, the Imposters, collaborating with those guests on tunes. So, right from the get-go, you get Elvis opening with the Elton John number "Border Song," then discussing Leon Russell with Elton, followed by Elton playing a Leon Russell song in Russell's style.

See? Absolutely obvious, and absolutely brilliant. I've oft advanced the theory that Elvis Costello is to music what Martin Scorsese is to film. Not only are they both incredibly talented at what they do, almost without peer in terms of longevity and adaptability, but they are both historians of their craft. Listening to either of them talk about their passions will make you passionate about whatever they are championing, too. So, who better to sit down in this kind of format and dish about rock, pop, and all things in between.

Elton John is the first guest, and it's indicative of how high Costello aims (though, to be fair, Sir Elton is a show producer). The next five shows feature President Bill Clinton, Tony Bennett, Lou Reed, the Police, and Smokey Robinson. Keeping his finger on the pulse of what's new, Costello follows with more recent artists like Rufus Wainwright, a grouping of Jakob Dylan, Jenny Lewis, and She & Him, and then a return to seasoned folks like Diana Krall, Herbie Hancock, and James Taylor. The series is at first taped at the NBC studios, and then it sets up residence at the Apollo Theater in New York. In a way, this is the musical equivalent of Inside the Actor's Studio: lengthy discussions of artistic endeavors that go deep into the featured subject's skill set in order to find out where the talent comes from and how it's brought to light. Instead of film clips, though, we get live music.

Bill Clinton is a bit of a format breaker. The saxophone-playing Prez does talk about his musical influences, but he doesn't play. The conversation veers into the parallels between music and politics, as well as the importance of music as part of the American heritage. As a result, there is a lot less music. The Imposters play the early Elvis Presley hits "Baby Let's Play House" and "Mystery Train." Jazz musicians Charlie Haden and Pat Metheny pay tribute to Clinton with a rendition of an original song called "Is This America? (Katrina 2005)" Thankfully, the discussion is so good, the absence of performance is not too noticeable. 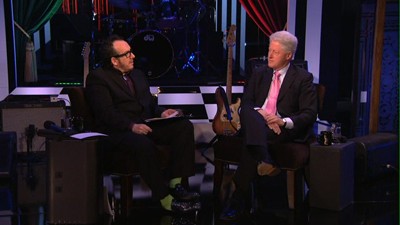 The songs played are a mix of Costello originals, the hits of the guests, and pertinent covers. So, on the episode with the Police, we get a medley of the band's "Walking on the Moon," Costello's "Watching the Detectives," and Cream's "Sunshine of Your Love." Just let that simmer a second. What an incredible line-up! Jakob Dylan and Costello performing the Clash's "Straight to Hell" is another real highlight. There are also other special guests. Jazz musicians like James Burton and Allen Toussaint regularly sit in with the Imposters, painter and film director Julian Schnabel comes on with Lou Reed, and even Elton John comes around a second time to interview and sing with Diana Krall, joining her for "Sorry Seems to be the Hardest Word" and "Makin' Whoopee," whereas Mrs. Costello joins Tony Bennett for "I've Got the World on a String." Sometimes, too, we get the likes of Sting and Lou Reed giving us lessons on how to play something specific, like the main riff to "Sweet Jane." Herbie Hancock never leaves the piano, Jakob Dylan doesn't put down his guitar.

The community shows are pretty great. The episode with Jenny Lewis, She & Him, and Jakob Dylan is meant to showcase kids who grew up in show business and are making their own name in music, and everyone ends up playing a song or two together, including a big jam on Elvis' hit "(What's So Funny 'Bout) Peace, Love and Understanding." The gathering of Rosanne Cash, Norah Jones, Kris Kristofferson, and John Mellencamp is meant to imitate a Nashville tradition called a "guitar pull," where folks swap stories and songs, all while playing the guitar. Hearing Kristofferson on "Sunday Morning Coming Down" is something special, and the whole group bookends the show with "Big River" and "Me and Bobby McGee."

Most of the music featured has rock or jazz roots and is generally more arty than pop. A standout as a different choice is opera singer Renee Fleming. Costello is just as comfortable talking to her about Verdi and Shakespeare as he is talking to M. Ward about the Beach Boys or Rufus Wainwright about Jeff Buckley, so Fleming's segment is as interesting as any other, maybe more so for being so outside the realm we'd normally see on a rock show. The nature of the conversation is actually very open, and so there is easy entry for those of us who may not be as familiar with the arias Fleming performs. Wainwright, guitarist Bill Frisell, and folk singer Kate McGarrigle (Rufus Wainwright's mother) come out on stage to perform folk standard "In the Pines" and Costello's song "The Scarlet Tide." Wainwright also sings some opera himself.

From country to jazz to indie rock to opera, it's all here, and Elvis Costello makes it all interesting. Hell, he even manages to get me to sit through an hour of James Taylor music, something I really can't stand. That's the skill of the showman, the power of a good interviewer, they can place anything in a frame of their own design, show it to us through their spectacles, and give us a whole new vision. 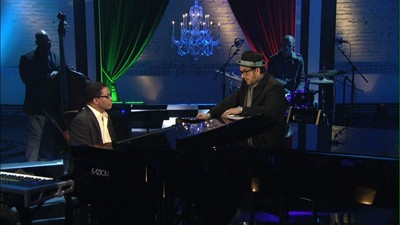 Video:
13 episodes are spread over five discs, with three on each and the final show plus bonus features on DVD 5. The program is shown in widescreen, with the quality of the picture being crisp and reflective of the original broadcast.

Sound:
Two options: a stereo mix and a 5.1 mix. Both are great, with warm tones and clarity even when the volume is cranked. The balance between the talk and the music is good, and the performances are mixed well to make sure all the elements are in the right place in your speakers.

Closed Captioning for the deaf and hearing impaired is available for those who require it.

Extras:
Spectacle: Elvis Costello with... - Season 1 comes in a fancy package with a shiny outer slipcase, and an interior foldable book that houses the DVDs along with a pocket that holds a program booklet. The color booklet has information on each episode, pictures of the guests (poor Jenny Lewis, forever immortalized in that horrible jumpsuit), and a note from Costello. I am not sure how to refer to the packaging for the discs, I have never seen this kind of thing before. There are two plastic trays, but no spindles for the centers of the discs. Rather, they are open/staggered slots that you slide the discs in, fitting them inside plastic tabs. It's economical, but not very user friendly. My box arrived with some discs loose and scratched, and once I figured out how they fit in the box, I was scared to take them out lest I break the plastic--or worse, the discs. A for effort, C for execution. 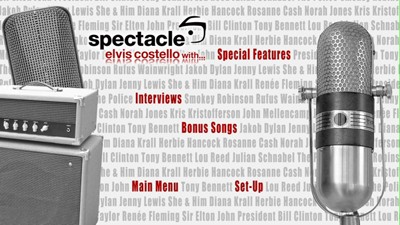 Bonus features on DVD 5 are comprised of extra interview footage and additional songs. The interviews are with Elton John, Rufus Wainwright, Sting, Rosanne Cash, and Smokey Robinson, and there is also footage of Elvis Costello talking about why he is doing the show. In fact, all of the interviews aren't deleted scenes, but rather backstage chats about the series and why each performer came on, as well as their opinion of Costello. Smokey Robinson also takes us on tour through the Apollo. The footage runs just over 44 minutes, and you can pick each subject one by one or play them all at once.

The extra songs are Costello on his own singing "Ballad of a Well Known Gun," "Beginning to See the Light," and "No More Tearstained Makeup." He also performs "Purple Haze" with the Police. This clocks in at just over 16 minutes. I particularly liked the country-tinged Velvets cover, complete with fiddle, accordion, and stand-up bass.

FINAL THOUGHTS:
Highly Recommended. Spectacle: Elvis Costello with... - Season 1 is just heavenly. I enjoyed every minute of this wonderful program. The refreshingly simple concept is that Elvis Costello sits down with musicians and singers of all stripes, from the young newcomers like Jenny Lewis through seasoned pros like the Police to jazz and opera legends like Herbie Hancock and Renee Fleming, and talks to each and every one about his or her craft, illustrating the discussion with songs. Informative and entertaining, Spectacle is a real winner. 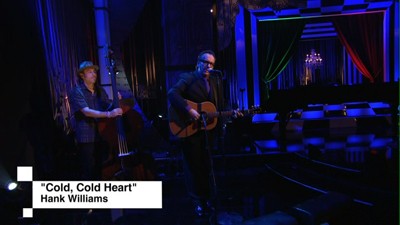