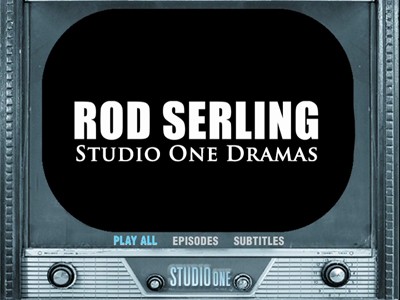 Recent efforts to bring classic 1950s television to DVD has created a boom time for fans of the material, and E1 Entertainment's efforts alongside the Archive of American Television have been at the forefront of the preservation of classic live broadcasts. My colleague Paul Mavis went into great length about their Studio One Anthology when it came out at the end of 2008, and his review provides an essential overview of what excites so many of us about this early period of broadcast TV (warts and all, including what makes some of the shows come off as dated). I also did some previous writing on the topic in my review of Criterion's The Golden Age of Television.

Studio One was CBS' premiere drama anthology, running 1948 to 1958. Every week they presented a live play for the television audience, be it a new script by a hot young writer or an adaptation of stage material. Amongst the writers who cut their teeth in these early days was Rod Serling, whose keen observational eye and serious interest in the nuance of moral dilemmas quickly earned him notice. Serling is best known today for his Twilight Zone series, which he introduced on camera at the start of every episode. Twilight Zone's reputation is often unfairly reduced to knee-jerk jokes about its twist endings, but the truth of the matter is, those shows endure not because of their often surprising turns, but because of the heartfelt and soulful dramatics that lead to the twist. Serling is one of television's foremost chroniclers of the human condition, something that is more than obvious on Rod Serling - Studio One Dramas. No sci-fi trappings here, just straightforward storytelling.

Rod Serling - Studio One Dramas collects two hour-long episodes previously included on the larger Anthology. Both are directed by Franklin Schaffner, who went on to direct Advise and Consent on the stage and Patton for the big screen, and worked with Serling again on Planet of the Apes. It's interesting to consider how the two plays here, 1956's The Arena and 1954's The Strike, predicted the subject matter that would continue to interest the director. Like Advise and Consent, The Arena is set in the U.S. Senate, and like Patton, The Strike is a war story about the courage of leadership. 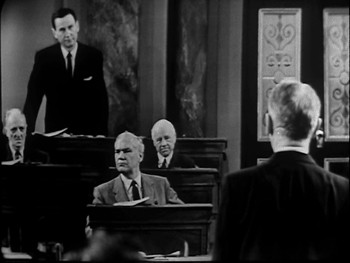 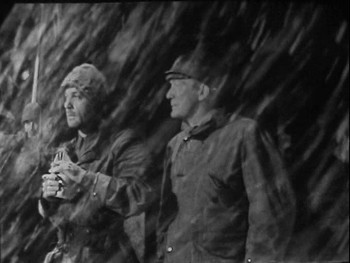 Despite being the later production, The Arena leads the disc. It tells the story of James Norton (Wendell Corey), a junior Senator appointed to a seat once occupied by his father. Dear ol' dad likely pulled some strings to get his boy in there, a fact not lost on Norton Sr.'s old political rival, Senator Harvey Rogers (John Cromwell). Despite the advice of his spin doctor, Jack Feeney (Chester Morris), Norton immediately locks horns with Rogers, a fight he is not equipped to handle. The more experienced politician massacres him, and Norton must decide whether a particularly juicy piece of dirt he has on the older man is worth the price of his integrity.

The Strike is second on the DVD, and it's set in South Korea in 1951. Major Gaylord (James Daly) is in charge of five-hundred men trapped under enemy fire in the middle of the Korean wilderness. He has one patrol of twenty that got lost on a recon mission, and when it comes time to move out, he is faced with a difficult choice. An air attack can take out the Communist artillery, but the recon unit would be collateral damage. Are the lives of twenty a fair trade for the full battalion?

In both teleplays, Serling poses a central question for two very different men: what is the right thing to do? Not what is the easiest, what is the most convenient, but what is right. The difference is that, in the case of Senator Norton, the right thing will allow him to sleep easier at night, but in the case of Major Gaylord, it will likely haunt him for the rest of his life. Norton is a stubborn man whose strings are pulled by his bitter father, and he lets his ambition and need to please his dad cloud his judgment; Gaylord is a man crippled by his conscience. Past experience has taught him that losing even one soldier hurts, and he'd be more than willing to pass off the decision to someone else. It's his men who force him to lead, demanding he fulfill the confidence and trust they have put in him.

The beauty of a Rod Serling script is that though he may pose a question that seems extremely compact, he unfolds it so that every possible angle can be explored, showing how large the true issue is. This is especially true of The Strike, where the men in Gaylord's command offer different reactions and modes of thinking in regards to the problem. A visiting chaplain (Roy Roberts) is a voice of faith and the greater good, while the soldiers take a far more cynical, practical view. They expect their higher-ups to make the bad decisions they can't and accept death as a product of war.

The acting is uniformly good through both shows. Chester Morris gets the meatiest role in The Arena. Senator Rogers even says as much: the man in the middle is the one with the real burden, he's the one who must see both sides and sway to either. Morris maybe overdoes some of the drunk scenes, but they work all the same. In The Strike, James Daly commands the screen as the Major. He is a fairly standard Serling lead. Rod loved watching a man fall apart. Daly sweats, paces, twitches, and loses his cool at every turn of the script page.

Anytime I watch these old shows, I always have to pause and admire their construction. The performers and the crew had to move between sets without taking a break, and I'm always fascinated by the complicated set-ups they create to give everyone time to get where they are going. When you step back and dissect what you are seeing, it's pretty remarkable. There were no do-overs. If the camera was not in place, if an actor tripped and fell or forgot his lines, there was no way to fix it, everyone would see. It's like live theatre, but beamed across the nation. Most of the productions on Studio One or other anthology shows, including these two episodes, rivaled regular motion pictures, and often, they got remade as full movies. You'd expect productions of this kind to be quaint throwbacks to a simpler time, but they are really far more complex than most of what the networks put on television in the decades after taped broadcasts became the norm and prior to the more recent cable revolution. 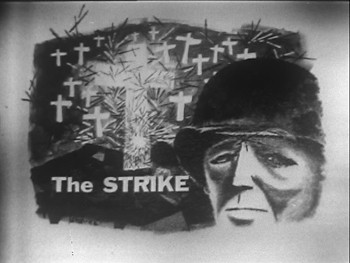 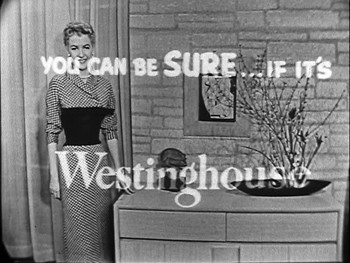 Video:
There was no video tape back in the early days of television, which is why programs were broadcast live. To preserve the material, the shows were shot on Kinetoscope, a process by which a camera was put in front of a TV screen showing the live feed, recording the program directly off the monitor. This naturally makes the picture quality slightly different than what we are used to. The prints used for this DVD are excellently preserved, with a fine clear picture. Yes, there is some print damage: some scratches, some dirt, the occasional glitch. The Arena has a spot on the center of the screen through the first quarter; someone needed to wipe the monitor! Overall, though, these look really damn good for their age.

The shows are both black-and-white, full frame, and shown in their complete broadcast versions. This includes commercials for Westinghouse Products. How bizarre to hear a company bragging that they make parts for both washing machines and atomic submarines! I can't imagine any corporation boasting about that these days.

Sound:
Both shows have their soundtracks mixed in mono. The audio is a little more worse for wear than the picture. There is some hiss and occasional drop outs, as well as some of the byproducts of the downside of live microphones. In The Arena in particular, you can hear the cavernous echo of the set, and when an actor turns away from the camera, his voice grows more distant. This, obviously, is not a criticism of E1's disc, just the nature of the material.

Extras:
Outside of some introductory trailers, the only extra is a 12-page book with liner notes, including extensive notes by Rod Serling's daughter, Anne Serling-Sutton.

FINAL THOUGHTS:
If you don't want to spring for the full and more varied Studio One Anthology to get these teleplays, then Rod Serling - Studio One Dramas is a good bet. It's more than that, actually. Featuring two original scripts by the master of the medium, this disc is a must-have. These recordings of the original broadcasts of The Arena and The Strike show not just what an incredible writer Serling was, but how potent the high-wire act of live television could be. Both are deftly executed, done-in-one dramas, and well worth repeat viewings. Highly Recommended. 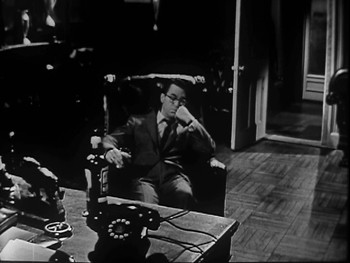 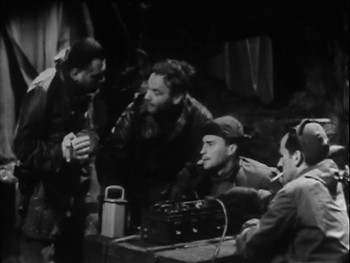