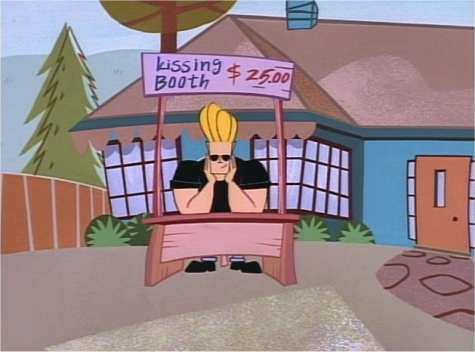 Like many of Cartoon Network's original series, Johnny Bravo (1997-2004) got its start on the What a Cartoon! show (AKA World Premiere Toons) as something of a pilot episode. Created by Van Partible, Johnny Bravo is essentially a fish out of water story: this strapping young Elvis disciple flexes his pecs and puffs up his pompadour, but the ladies constantly smack him away. It's almost as if Johnny was born in the wrong generation. He'd have done quite well for himself a few decades earlier---but as it stands, he's literally the caricature of a well-meaning but stupid young stud (think Marc Hempel's Tug and Buster for younger audiences). Whether or not Van Partible created Johnny as an outlet for his own deep-rooted ambitions is undetermined; not only is Partible's middle name "Bravo", but his appreciation for Elvis was certainly a factor. In any case, Johnny Bravo isn't about our hero's origin story...it's about his life and times, his quirky "friends" and his never-ending quest for babes.

Season One begins with the eponymous short that originally aired as a pilot episode---and from here on out, the season's formula is pretty much set in stone. Featuring simple but accessible artwork, plenty of "smeared" movements (to create a fast-moving but fluid sense of action), a gaggle of pop culture references and a ridiculous amount of catch phrases, Partible's creation aired sporadically for seven years as one of Cartoon Network's first original hits. It's a solid debut that has aged fairly well during the last 13 years, even if some of the 7-12 minute segments aren't quite as memorable as others. Featuring early contributions by Seth MacFarlane (Family Guy) and Butch Hartman (The Fairly OddParents), Season One includes the following 13 episodes:

"Date with an Antelope / Did You See a Bull Run By Here? / Cookie Crisis"

"Going Batty / Berry the Butler / Red-Faced in the White House" 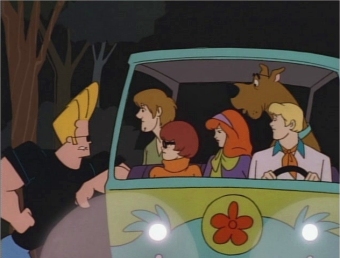 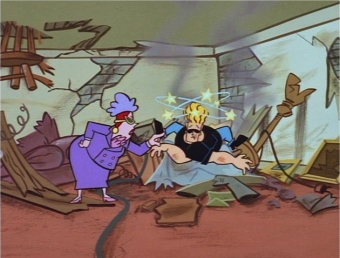 Puns aside, Johnny Bravo's main strength is bravado; it's centered around a confident man, so it makes sense that most segments speed along without wasting much time. It's never been a series that got by on art quality or excessively creative stories: much of what's here is extremely simple but tastes great in small doses. Standouts include "Super Duped" (Johnny gets dragged to Suzy's show-and-tell to impress a teacher), "The Sensitive Male" (Johnny gets a Schoolhouse Rock lesson in seduction), Bravo Dooby-Doo (Johnny meets up with Scooby and the gang while looking for a relative), "Date With An Antelope" (no description needed), "Cookie Crisis" (a Dr. Seuss-inspired tale of Girl Scout cookie sales), "The Aisle of Mixed-Up Toys" (Johnny heads to the toy store to pick up donations for a pretty lady), "Johnny Meets Adam West" (again, no description needed) and many more. A few less-than-impressive episodes (the Jungle Boy shorts ["Mr. Monkeyman" and "Bungle in the Jungle"] and "Talk to Me, Baby", for example) slow things down a bit, but it's hard to complain about this first season overall: it's more confident, consistent and entertaining than most cartoon debuts.

It's obvious in retrospect, but another of Johnny Bravo's strengths is a solid voice cast. Jeff Bennett anchors the series nicely as Bravo himself, while often playing three or more parts in a single episode. A rotating lineup of notable voices is also featured during this first season, including Billy West, John DiMaggio, Maurice LaMarche, Frank Welker, Jeffrey Tambor, Mark Hamill, Casey Kasem, Chuck D, Farah Fawcett, Adam West, Donny Osmond, Jack "Schoolhouse Rock" Sheldon, Dan Castellaneta and others. In most cases, it's great to have the actual celebrities playing themselves rather than cheap imitations; this is especially true during "Bravo Dooby-Doo", which features more than half of the gang voiced by their original counterparts. In other cases, it's negligible: Vendela Thommessen voices herself in "Talk to Me, Baby", but supermodels aren't typically remembered for their speaking.

In any case, most fans will remember this first season as a rather self-contained one; Johnny Bravo would be "reinvented" several times, with major shifts in style and supporting characters, during the next six years. For my money, this first season was the most satisfying: Johnny maintains the right balance between dumb and harmless, and the supporting characters don't attempt to overshadow the main man himself. All things considered, there's plenty to enjoy here, whether you're a die-hard Bravo disciple or you're seeing it for the first time on DVD. Released alongside Courage the Cowardly Dog: Season One as the first wave of Cartoon Network's "Hall of Fame" titles, Johnny Bravo arrives in grand fashion nearly 13 years after its original broadcast premiere. This time around, though, we're treated to a handful of terrific bonus features---and though the technical presentation still isn't perfect, fans should appreciate the efforts of Warner Bros. in just about every department. Let's take a closer look, shall we?

Presented in their original 1.33:1 format, these episodes look fairly good with one reservation. The first three-segment episode stands out for all the wrong reasons; it's soft, slightly worn and suffers from notable amounts of interlacing. The other 12 episodes fare much better and don't seem to suffer from digital problems at all, save for trace amounts of noise. This makes for a rough start...but in the case of the pilot, it could've been a source material issue and nothing more. Overall, fans should be pleased.

The audio presentation is basic but ever-so-slightly more consistent, as these 13 episodes are presented in their original Dolby Digital 2.0 Stereo mixes and sound fine. Dialogue and music cues are free of hiss, distortion and other such problems. Thankfully enough, optional English SDH subtitles are also included during these episodes. 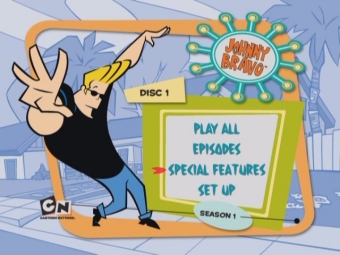 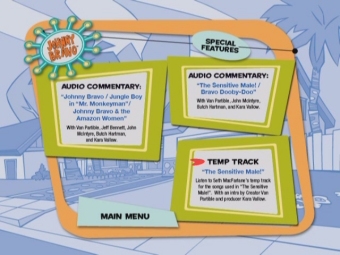 Seen above, the colorful menu designs offer simple, problem-free navigation. Each two or three-segment episode is presented with roughly half a dozen chapter stops, while no obvious layer changes were detected during playback. This two-disc set is housed in a eco-friendly hinged keepcase with a matching metallic slipcover---and though we don't get any booklets or inserts, episode titles have been printed on the packaging.

Bonus Features
Spread equally over both discs, we're treated to a nice little assortment of extras here. Leading things off is a trio of Audio Commentaries during Episodes #1, 3, and 13, featuring the likes of Van Partible, voice actor Jeff Bennett, writers/directors Butch Hartman & John McIntyre and producer Kara Vallow, among others. These tracks are lightweight, chatty and informative; they seem to have been cobbled together from various interviews, but are scene-specific in many cases. For the most part, the participants discuss the production of each segment and share a few behind-the-scenes tidbits, so they're definitely worth a listen.

Next up is "Bringing Up Johnny Bravo" (12:29), a like-minded retrospective piece that traces the series' transformation from a humble school project to a long-running show on the fledgling Cartoon Network. Many of the same participants are featured here, and we're also treated to a number of vintage photos and drawings. On a similar note are Pencil Tests (15:01) for the first two segments, presented with a brief introduction by Van Partible and Kara Vallow. These are presented with raw character vocals only (no sound effects/music), so they're more for die-hard Bravo disciples than casual fans. Last but not least is an audio-only Temp Track (1:46) for "The Sensitive Male", featuring the vocal stylings of Seth MacFarlane.

Overall, this is a solid collection of bonus features, and they're presented in a mixture of full-frame and anamorphic widescreen formats. Unfortunately, no subtitles or Closed Captions have been offered during these extras.

It's taken more than a decade to arrive, but fans of Johnny Bravo can finally revisit the first season on DVD. These 13 episodes have aged fairly well in as many years, thanks to goofy stories packed with swagger, style and slapstick. Warner Bros.' DVD treatment is well-rounded in all deparments, pairing a solid technical presentation with a surprising assortment of quality bonus features. Overall, this low-priced collection should appeal to fans of all ages, which makes Johnny Bravo: Season One a Highly Recommended title.