Courage the Cowardly Dog: Season One 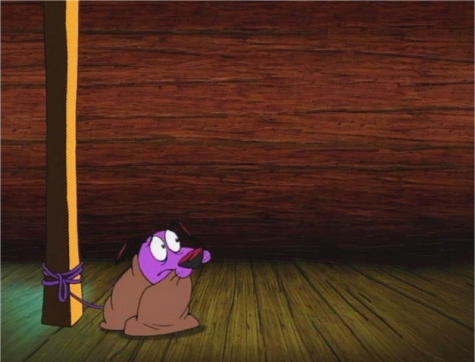 As one of the first "Cartoon Cartoons" to enjoy several years of success, John R. Dilworth's Courage the Cowardly Dog (1999-2002) occupied its own little darkened corner of Cartoon Network. Roughly seven years after the fledgling network originally launched, it had already amassed several breakout hits in shows like Dexter's Laboratory (1996-2003), Johnny Bravo (1997-2004), The Powerpuff Girls (1998-2005) and Ed, Edd & Eddy (1999-2009)---and, not surprisingly, Courage was anything but a carbon copy of what had come before. Originally appearing on the network's What a Cartoon! Show (AKA World Premiere Toons) in 1995 and securing an Academy Award nomination in the process, Courage finally procured his own series by the end of the decade. Our adventures follow the eponymous pink pup and his caretakers, Muriel and Eustace Bagge, who live together in a desolate farmhouse in Nowhere, Kansas. More often than not, it's up to Courage to save Muriel (and occasionally Eustace) from an assortment of ghosts, aliens, zombies, or other things that go bump in the night.

Upon its debut on November 12, 1999, Courage was the highest-rated premiere in Cartoon Network's relatively brief history---and though it was technically ended by the network after four seasons on the air, it's safe to say that Dilworth's creation went out on a relatively high note. For now, though, it's easy to see why Courage stuck around for so long: the stories are goofy and entertaining, the characters are colorful, and the world of Nowhere (and beyond) is hauntingly fun, thanks to the series' engaging atmosphere. This first season includes the following episodes in their original broadcast order:

Disc One
"A Night At The Katz Motel / Cajun Granny Stew"
"The Shadow Of Courage / Dr. LeQuack"
"Courage Meets Bigfoot / Hothead"
"The Demon In The Mattress / Freaky Fred"
"Night Of The Weremole / Mother's Day"
"The Duck Brothers / Shirley The Medium"
"King Ramses' Curse / The Clutching Foot"
"The Hunchback Of Nowhere / The Gods Must Be Goosey"

Disc Two
"Queen Of The Black Puddle / Everyone Wants To Direct"
"The Snowman Cometh / The Precious, Wonderful, Adorable, Lovable Duckling"
"Heads Of Beef / Klub Katz"
"The Revenge Of The Chicken From Outer Space / Journey To The Center Of Nowhere"
"Little Muriel / The Great Fusilli" 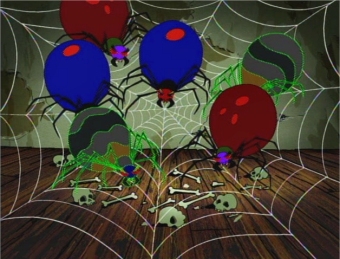 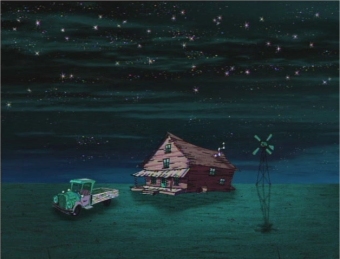 Overall, fans will enjoy revisiting these 13 episodes; not only are they fairly consistent, but they haven't aged much during the last decade. Highlights include "The Shadow Of Courage" (a deceased man's shadow wreaks havoc on the citizens of Nowhere), "Hothead" (Eustace's scalp treatment gives him destructive powers), "The Demon In The Mattress" (a parody of The Exorcist, with Muriel as the hapless possessee), "Freaky Fred" (another appropriate parody, this time borrowing from Sweeney Todd), "The Hunchback Of Nowhere" (Courage and the infamously unattractive figure become friends after he takes up residence on the Bagge farm), "The Precious, Wonderful, Adorable, Loveable Duckling" (a sweet little duck attempts to keep Eustace all for itself) and "The Revenge Of The Chicken From Outer Space" (a sequel to the Oscar-nominated 1995 pilot), just to name a few.

It's obvious---especially in retrospect, if you were younger when the series first premiered---that Courage takes a very cinematic approach to its art, storytelling and characters, especially the horror genre. Most cartoons made within the last 10-15 years, at least those with a younger audience in mind, tend to favor slapstick and general goofiness. While Courage undoubtedly has its fair share of both, it also creates a wonderfully spooky atmosphere and ambience---and, in most cases, piles on plenty of surrealism. Whether it's the colorful, detailed background art or the suspenseful score, Courage does what most cartoons are too scared to do: frighten the audience, but not in a mean-spirited or disturbing way. Like The Real Ghostbusters or the animated version of Beetlejuice, we're invited to a slightly darker and more slanted world than usual, but a sense of charm and off-kilter comedy keeps things from staying too dark. From start to finish, Courage was a fairly original series that enjoyed four successful seasons...but whether we'll get to see the other three on DVD remains to be seen.

For now, fans can enjoy this first season on DVD, even though it's taken over 10 years to arrive in a complete form. Though Warner Bros.' efforts are relatively basic from top to bottom, it's hard to complain about the actual episode quality. This has been released (along with Johnny Bravo: Season One) as part of Cartoon Network's "Hall of Fame"---so if it does well, we'll undoubtedly see more seasons in the near future. In the meantime, let's take a closer look at what's included here:

Presented in their original 1.33:1 format, these episodes look a little rough for a relatively recent series. Image detail and black levels are fine, but the colors are often oversaturated and plenty of digital noise can be spotted along the way. It looks more like these episodes came from a second-hand source, although there aren't any major signs of interlacing or other digital imperfections. I'm sure these episodes offer a mild improvement over their original broadcast counterparts, but I was expecting a little more.

The audio presentation is slightly more satisfying, as these 13 episodes are presented in their original Dolby Digital 2.0 Stereo mixes and sound perfectly fine. Dialogue and music cues are free of hiss, distortion and other such problems. Thankfully enough, optional English SDH subtitles are also included during these episodes. 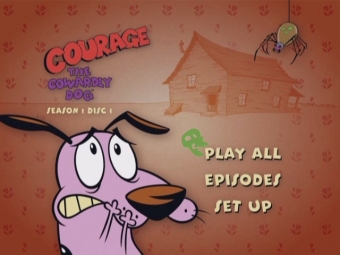 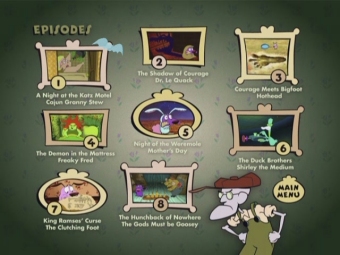 Seen above, the muted menu designs offer simple, problem-free navigation. Each two-segment episode is presented with roughly five chapter stops, while no obvious layer changes were detected during playback. This two-disc set is housed in a standard hinged keepcase with a matching metallic slipcover---and though we don't get any inserts, episode titles are printed on the packaging.

Bonus Features
Unfortunately, we don't get any extras here...unlike, say, Johnny Bravo: Season One, which at least got a few goodies. A word from the creators (or the original 1995 short "The Chicken from Outer Space") would've been a nice effort, at the very least.
Final Thoughts

Cartoon Network's small catalogue of original programming has produced several standouts during the last 18 years, and John Dilworth's Courage The Cowardly Dog certainly makes the list. TV shows aimed at younger audiences (animated or otherwise) usually don't go for thrills and chills, so it's good to see a genuinely surreal and slanted series develop a decent following. Unfortunately, Warner Bros.' DVD treatment doesn't offer much support: the technical presentation is only passable and the lack of bonus features certainly doesn't help matters. Overall, though, fans of Courage should be glad to finally have the complete first season on DVD, and a relatively low ticket price helps to ease the pain. Recommended for new and old fans alike.