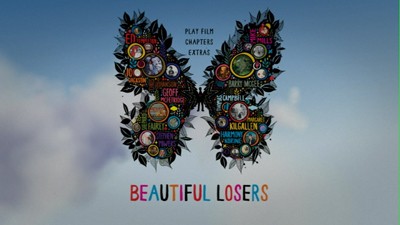 Beautiful Losers was the name of a recent art show reuniting a group of NYC-based artists who had come through the same galleries and reached prominence in the early 1990s. This documentary film chronicles the road to that retrospective, looking at the disparate backgrounds of the various creators and searching for the commonalities that brought them together.

Some of the people profiled will be familiar to pop culture junkies, some will not. Mike Mills, for instance, is a filmmaker and artist who has directed music videos for the Beastie Boys and the movie Thumbsucker, and Shepard Fairey is the designer behind the Barack Obama "Hope" poster. Harmony Korine wrote Kids and directed Gummo. I imagine many of the others will be under most people's radar unless they read Giant Robot or keep up with other arts publications. I was familiar with some of the art in the film in terms of style, but not with the names behind it. That, of course, has changed having watched Beautiful Losers, and I find myself now more interested in works by people like Margaret Kilgallen and Geoff McFetridge (you have probably seen his Pepsi campaign).

The movie tracks how all of these artists came together, digging into their background and what compelled each artist to begin creating. Interviews are illustrated with generous helpings of archival footage and actual images of their art, and the knotted storytelling style tangles everyone up in one DNA strand. Admittedly, it makes it a little hard to sort out who is who at first, but the ultimate point is that all of the people in this collective grew up feeling like misfits, used art as a way to express their outsider status, and eventually gravitated to one another in search of like-minded individuals. Their focal point was a shabby New York gallery called Alleged, run by Aaron Rose and encouraging a do-it-yourself philosophy. Incorporating skate boarding, punk and indie rock, and street art, these talented folks discovered, like most famous misfits, that they were actually speaking for a far greater audience than they had realized. Soon, they were creating high-end advertising campaigns and designing album covers for Sonic Youth.

There is a little bit of self-mythologizing going on in Beautiful Losers. Aaron Rose, the man behind Alleged and the organizer of the titular art show, is the director of Beautiful Losers, as well as one of its more active commentators. The question of how one can go from street art to accepting huge advertising contracts from global conglomerates is pretty easily swept aside, with only Stephen Powers, a.k.a. ESPO, expressing displeasure at the supposed subversion of letting yourself be used by the man. He actually does something about it, too, and his project to repaint Coney Island is an admirable and quite impressive practical application of his artistic skills. It seems like there could be a whole extra documentary just on that.

Even if Rose does sidestep some of the bad stuff, there is a plus to having him asking the questions. He gets his friends to open up in ways that other directors might not be able to, and there are some wonderfully candid moments where he lets an edit run a little too long, spying the private moment where his colleagues' guards drop and their true personality peeks through. There is an intimacy and an excitement, as well as a mutual respect, that digs past mere nostalgia and gets at why these guys all originally vibed on one another, how the creative sparks were flying and how everyone influenced one another. One of the participants notes that at this age, no one is worried about who is taking from whom, they just love being together. Obviously, this was made prior to Shepard Fairey's current legal troubles.

As the story progresses, it becomes clear that it's one of those things where the group had to come apart before they could come together again. Part of the problem was the success they all had, culminating in an insane multi-platform exhibit in Tokyo where it's suggested the artists were maybe indulged a little too much for their own good. It's also shortly after this that Margaret Kilgallen passed away, and though the grief is initially splintering, her death ends up being the reason a lot of these guys reprioritize their lives. Consider it a portrait of how punk rock brats mature into adults.

Beautiful Losers ends up being one-half time capsule, one-quarter promo reel, and one-quarter a reflection on the future. It has a lively, arty style that keeps its basic story rolling, and as an artist himself, Aaron Rose keeps in mind that what these people did was as important as how or why. Thus, viewers walk away from Beautiful Losers with a solid grasp of the art. Perhaps moreso than the drama that inspired it. In that, it's a rewarding cinematic experience, like a party full of lots of cool people making neat things, and for once, all of us are cool and neat enough to be invited. 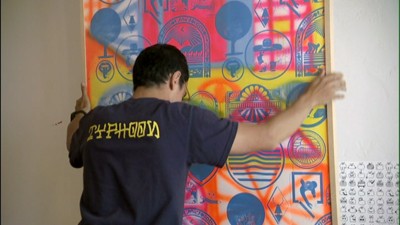 Video:
Oscilloscope Laboratories present Beautiful Losers in a lovely 1.78:1 anamorphic transfer. The image is crisp, and the colors sharply rendered. For a film that is about beauty, they did this disc up right.

Sound:
A basic stereo mix is very good. The soundtrack is clear and free of digital noise or any hiss. 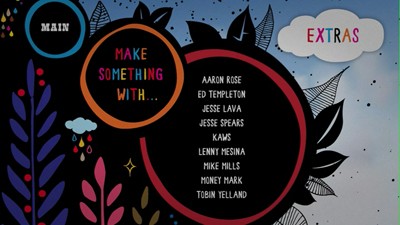 Like all the Oscilloscope releases, Beautiful Losers is an excellent art object in terms of packaging just as much as it is in terms of film. It comes in a cardboard sleeve made from recycled materials. There is an outer slipcase, and the film itself is in a fold-out "book" that fits inside the case. The interior of the book features liner notes by director and participant Aaron Rose.

FINAL THOUGHTS:
Recommended. Beautiful Losers is a stylish, entertaining, and informative documentary about a group of outsider artists who channeled through New York City in the 1990s. Though it can be a little soft on the subject--it's made by the people involved in order to promote the people involved--it makes up for avoiding the tough questions by really getting into the creative process and showing us copious amounts of what all the contributors produced. For anyone who has ever pondered what fuels a creative spirit, Beautiful Losers is a must. 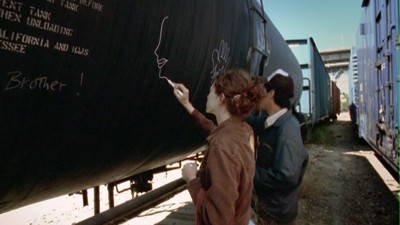