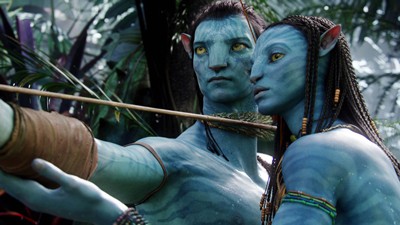 Here's a question: why do space explorers and the like give planets names like Pandora and then act surprised when they turn out to be full of unforeseen troubles? It's like that old joke about naming your daughter Stormy or Bambi and pretty much dooming her to be a stripper. If I ever have to name a planet, it's going to be something like "Super Happy Funtime World."

Pandora is the name of the planet where James Cameron's bold new actioner Avatar is set. Avatar is Cameron's much ballyhooed attempt to create a movie that is almost entirely special effects, a 3-D extravaganza where he uses digital technology to create a completely fabricated world inhabited by completely fabricated, realistic characters. Some are waiting to see if his follow-up to Titanic is going to be his own cinematic Titanic, a supposedly unsinkable ship that cracks under its own weight, and judging by how the skeptics seemed to outweigh the fanatics at the time of the screening I saw, it's possible they could get their wish. Except that would be a really terrible thing, because Cameron has created something visually magnificent here. It's the most expensive dream a teenaged boy could ever have, full of explosions and naked blue girls and just about every other wish fulfillment scenario he can muster. The script may lack in originality--it's essentially every other James Cameron movie ever made, Braveheart as directed by Hayao Miyazaki but with the ending from the The Last Samurai--but it more than makes up for the clunky dialogue and familiar scenarios by exciting the senses with the filmmaker's boundless visual ambition.

In the Cameron tradition, the military-industrial complex has set its sights on a far-flung planet to mine its mineral deposits. Specifically, some kind of rock with the ludicrous moniker of "unobtanium." (EDIT: Ludicrous, but apparently a legitimate term.) What makes unobtanium so unobtainable is that the biggest deposit of it is underneath the village of the indigenous population of Pandora, a tribe of blue-skinned giants called the Na'vi. At the center of the Na'vi village is a humongous tree that is also kind of the heart of their world and the home of their goddess. The rainforest-like planet is actually one giant network, its vegetation and animal life living and breathing as one. It's one of the grand themes of Avatar, this idea that all life can be connected, that energy is transferable, and our body is not our only vessel. 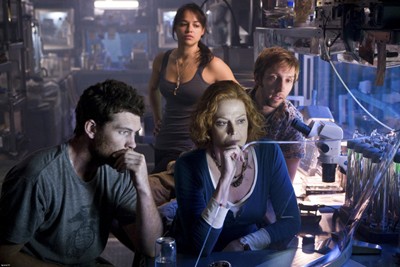 The issue at hand is how to get the Na'vi off their land so the earthmen can mine there. Hints are made that our planet is dying and that our environment is destroyed, but Cameron leaves that largely to our imagination. On one side of the argument is the macho Colonel Miles Quaritch (Stephen Lang), who is in charge of the company's security forces, a mercenary group made up largely of ex-military. On the other side is Grace (Sigourney Weaver), a scientist who has studied the Na'vi and wants to come to a peaceful solution. In the middle is the corporate stooge (Giovanni Ribisi), who is open to whatever solution will deliver the best quarterly report to his stockholders. As you can see, Avatar isn't exactly subtle in its politics. White earthmen bad, blue alien people good. It's a little hard to argue with, in any case, but I am sure some folks will try.

Enter into the mix Jake Sully (Sam Worthington, who was apparently forgiven for his involvement in Terminator: Salvation). Jake is a marine who lost the use of his legs in battle. His twin brother was an egghead who was part of the company's Avatar program, where they create empty bodies that look like the Na'vi but that are specially designed using human DNA so that their intended hosts can mentally link to the bodies and control them from a remote location, like an upgraded virtual reality where you really become what you're playing at being. Jake is called in to replace his brother, and he joins Grace's team on the ground while also serving the Colonel. He ends up infiltrating the Na'vi and living among them as one of their people. A mystical sign from their goddess has told the Na'vi that Jake is special, and so they assign the King's daughter, Neytiri (voiced by Star Trek's Zoë Saldana), to teach him the way of their people. Jake falls in love with Neytiri and with Pandora. He flies on pterodactyl-like creatures and communes with the trees and even scores a little indigo strange. It's easily the creepiest part of the movie, watching two blue aliens get it on. Given that the Na'vi are 100% computer animated, I guess we can consider that scene James Cameron's sales pitch to the porn industry. Yes, you can use my new technology, too. (As avatars go, I'd still rather date Felicia Day's.) 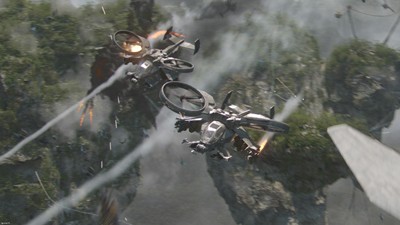 Pandora is a fully realized world, created from a bunch of zeroes and ones, no soundstage required. It's a beautiful and wondrous thing to look at, even when it goes all glowstick-y, like Cameron wanted to make the black light posters he had in his college dorm come to life. It's pretty much impossible to describe the level of illusion on display here. I've heard Avatar compared to everything from World of Warcraft to Ferngully, and even I was among the early skeptics who thought the clips in the trailer looked rubbery and fake. No bones about it, the animation in Avatar is as complete as anything Pixar has done, but all the more surprising for being so real. At some point, I believe the humans and the Na'vi interact, at least in the battle scenes. It's impossible to tell, though, which of the earthmen are real actors and which are computer generated or created through stop motion technology. (Robert Zemeckis should be in a fetal position right now, crying to himself and wondering where it all went wrong.) The many creatures on Pandora are wild and imaginative, the battle scenes are exciting, and Cameron manages to give his animated actors as much humanity as he generally gets out of his human actors--which, sure, isn't saying much, but at least they fit in! He also uses 3-D to full effect, pushing the field of vision as far back as it will possibly go and rendering the smallest foreground detail so that it hangs over the audience's heads. Avatar never feels gimmicky, there is no "Here comes the spear! Duck!" There is an unavoidable distance created by the nature of the experience--it's hard to forget you're watching a hi-tech 3-D blowout--but a lot of that melts away during the huge third-act battle. When the earthmen come, Jake unifies all of the Na'vi tribes from the four corners of Pandora. He recruits earth, air, water, fi--ooops, sorry. Got my Avatar franchises mixed-up. In this one, some of them ride horses, some live by the sea. It's totally different than the Nickelodeon cartoon.

Except, you know what? The Nickelodeon cartoon not only looks great, it has great writing, too. It's my one major beef with Avatar. There is no reason why this movie shouldn't have a better script. In all the time it took to develop the computer programs and build the digital models for the movie, James Cameron could have pulled in someone with real chops to help him punch up his screenplay. The structure is there, including nearly imperceptible set-ups and payoffs that make the first-act wanderings actually have some meaning in the third. It's just missing believable dialogue and deeper characters. For all the time spent making the Na'vi look real, they could have spared some time for them to actually be real, too. Avatar is wicked cool, but it would be so much cooler if I didn't feel like I had to apologize for its faults even as I am praising its achievements. (Don't even get me started on James Horner's score. Hell, from the sound of all the recycling he's done, it sounds like he barely got started himself.)

I hope Avatar does well, I really do. James Cameron has done an adventurous, crazy thing here, and I hate to see hacks like Michael Bay get huge box office for their anti-cinema when there is someone like Cameron going out and making his gonzo visions into something tangible. I mean, even if Avatar isn't all that original, at least it is intelligible and never insulting. I was never bored for long, and even when I was, I was still in awe of what I was seeing. There's a lot of bang for the buck, and really, Avatar is a movie you have to see on the big screen, in 3-D, volume cranked to the max. You'll really be sorry one day if you don't, listening to the rest of us brag about how we were there, we were a part of it, and you wussed out and waited for DVD.