BBC Worldwide // Unrated // April 6, 2010 // Region 0
List Price: $24.99 [Buy now and save at Amazon]
Review by Stuart Galbraith IV | posted March 27, 2010 | E-mail the Author
Sharpe's Challenge (2006) marked the return of Bernard Cornwell's swashbuckling, early 19th century hero after a nine-year absence from television screens. The literary Sharpe began with Sharpe's Eagle in 1981 and has continued through the years, most recently with Sharpe's Fury in 2006. Television movie versions of Cornwell's stories began in 1993 at the rate of about three a year until Sharpe's Waterloo in 1997. Though filmed on location in Turkey, that last TV movie was understandably hampered trying to stage a 200,000-man battle on a TV-movie budget. According to die-hard Sharpe fan Jeff Flugel, Sharpe's Challenge has the big advantage of trying to do a bit less with obviously more money.

Not having read nor seen any of Sharpe's previous adventures, I found Sharpe's Challenge generally enjoyable but unexceptional. It has nice production values but still has the look of a TV movie and no particular visual flair. The characters are broad stereotypes, and the script isn't exactly intellectually taxing, but it has much the same charm as a B-level swashbuckler of old - if not the big-budget ones for Warner Bros. and Fox that used to star Errol Flynn and Tyrone Power, then at least the cheaper Technicolor ones Universal used to make with lesser stars like Jon Hall and Tony Curtis.

The Blu-ray offers a pleasant presentation and includes the usual assortment of extra features. 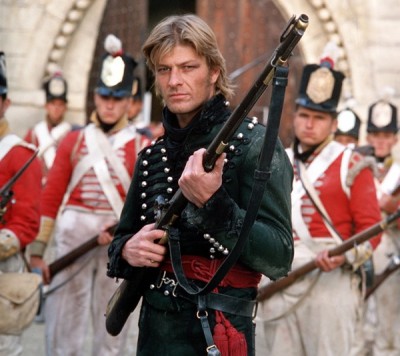 The 105-minute program begins with a violent prologue set in 1803 India where at an East India Company outpost then-Sgt. Sharpe (Sean Bean) watches helplessly as every man, woman, and child is murdered in a surprise attack led by traitorous East India Company Major William Dodd (Toby Stephens). Sharpe himself is seriously injured, but survives.

(Stephens's appearance thus pits two former James Bond villains against one another: Bean starred opposite Pierce Brosnan in GoldenEye while Stephens fought him in Die Another Day.)

Fourteen years later, the Duke of Wellington (Hugh Fraser, late of Poirot) implores the now retired Sharpe to return to India to fight Dodd, who is acting against the British as chief adviser to a teenage Maratha rajah, Khande Rao (Karan Panthaky). Sharpe resists until he learns that his best friend, Patrick Harper (Daragh O'Malley), also investigating Dodd's movements, has gone missing.


Sharpe has no trouble finding Harper but complications arise when Celia (Lucy Brown), the daughter of General Burroughs (Peter Symonds), is kidnapped by Dodd's troops, and the ailing general is replaced on the field by Sharpe's old nemesis: the cowardly, pompous, and racist General Sir Henry Simmerson (Michael Cochrane). As Simmerson would be only too happy to see Sharpe dead, he agrees to the latter's plan of (with Harper) infiltrating Dodd's forces by masquerading as deserters-turned-mercenaries.

Apparently something of an amalgam of three Cornwell novels - Sharpe's Tiger, Sharpe's Triumph, and Sharpe's Fortress - Sharpe's Challenge is extremely old-fashioned but then again that's part of its charm. One has to admire its fancy footwork side-stepping obvious issues of British imperialism and racism in India, mainly by making Dodd the primary villain, but also in portraying Sharpe himself as a career soldier but essentially an outsider cynical about Britain's role in Asia. Madhuvanthi, Dodd's lover, a concubine-turned-regent played by the gorgeous Padma Lakshmi, is a memorable villainess, but she's likewise offset by the rajah's kindly sister.

Even so it's hard to imagine an old-fashioned, Cowboys vs. Indians Western being made today, even one with Native Americans duped by a traitorous cavalryman.

Sharpe's Challenge's greatest strength is the camaraderie between Sharpe and Harper. Bean's fine but Irish actor O'Malley has a relaxed, world-weary presence I found very appealing. Conversely, Toby Stephens is way over the top as the sneering General Dodd, though the part is written that way and the actor by this point seems hopelessly typecast in such parts. Besides sexy Lakshmi, Lucy Brown makes an appealing damsel in distress.

There are, incidentally, brief flashes of nudity (no complaints from this reviewer) and amusingly shocking bits of (mostly off-screen) gruesomeness, such as the Indians' penchant for executing their British prisoners by "nailing" them, pounding thick iron nails directly into their skull.

The show was filmed on location at Amber and Mehrangarh Forts, both in Rajasthan, India. The settings are breathtaking, and especially impressive in high-definition. The production also does an excellent job of integrating location sets (e.g., fortress walls razed by the British troops, etc.) with the centuries-old fortresses.

At least two different cuts of Sharpe's Challenge exist, and purists may be disappointed to learn that this release is the shortest. SharpeFilm.com reports this aired on ITV as two 90-minute programs (presumably including commercial breaks) while the British DVD consists of two 69-minute shows. This 105-minute movie-length cut is an official BBC America/international release version. The U.S. Blu-ray of the subsequent Sharpe's Peril (2008) does includes both the long and short version, but not so here.

In any case, what's here looks quite nice, despite having been filmed in Super 16. However, as with last year's Pride & Prejudice, another British show in 16mm, the results in high-def are extremely impressive, better frankly than some filmed-in-35mm Blu-ray releases. The Dolby Digital 5.1 mix (supported by optional English subtitles) is state-of-the-art and nicely mixed. The disc is region-free.

One complaint: the BBC really needs to do away with its Terry Gilliam-esque animations preceding its releases that essentially accuse everyone watching of being a potential thief. (And we all know there's a global cartel out there bootlegging episodes of Yes Minister and Keeping Up Appearances.) It's really obnoxious, offensive and unnecessary.

For what it is, Sharpe's Challenge is packed with supplements. Included are two audio commentaries, one with stars Sean Bean and Daragh O'Malley, the other with director Tom Clegg. The former is genial enough but a bit too relaxed while the latter is informative but with long stretches of silence; cutting them together into a single track would have been better.

Also included is a 47-minute behind-the-scenes featurette that goes into all kinds of detail about the production; 16 minutes of deleted and expanded scenes are also included. Both of these are in standard definition.

Creating the HD Master is, appropriately, in high-definition, and is quite interesting. Conversely, a so-called photo gallery defeats its purpose by deliberately softening and texturing its images to resemble aged parchment seen through an archway. The point of this is what exactly?

Sharpe's Challenge didn't make me want to rush out and see all its title character's previous adventures, but I'm also sufficiently intrigued to be looking forward to the BBC's next Blu-ray offering, Sharpe's Peril, released simultaneously. Extras are plentiful and the presentation is excellent. Recommended.