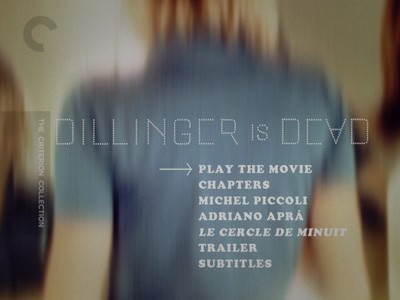 Dammit, you got me again, Marco Ferreri! Advantage to you. While our contentious relationship isn't exactly on par with the feud between Armond White and Noah Baumbach--for one thing, even if you were alive, you'd likely have no idea who I am--this cinematic ping pong game has got to stop. The first serve I took from you was your vaunted masterwork La Grande Bouffe, and to say I was underwhelmed would be to put it mildly. Your second volley was your follow-up, 1974's absurd take on U.S. history, Don't Touch the White Woman. That film irritated the living crap out of me, and in my review, I promised to stay out of your way if you stayed out of mine.

Well, you had to go and get yourself a Criterion release, didn't you? Hit me where I live, whydoncha? So here we go, third pitch and third strike*: Dillinger is Dead, your 1969 oddball nugget about one man's restless, insomniac night roaming around his own mind. Despite my misgivings, I was willing to give you a fair try. And I did. Only it's another swing and a miss.

Thankfully, unlike the other films, this one neither irked nor angered me. On the contrary, Dillinger is Dead has left me so nonplussed, I really don't know what to say about it. I have no reaction beyond a shrug. Not exactly a stellar recommendation or a fiery condemnation, I know. In fact, I think we'd both feel more comfortable if I hated it even worse than White Woman. My review might as well be written on a wet paper bag. 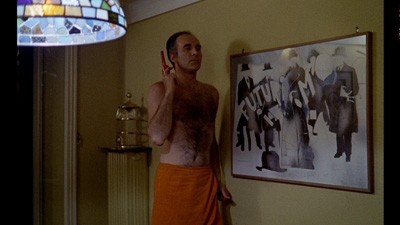 Let me try to explain this movie for the folks in the cheap seats. Esteemed 1960s screen actor Michel Piccoli plays Glauco, a man who makes a living designing gas masks. Not necessarily an ignoble profession: if the modern world is going to poison the air you breathe, Glauco is going to protect you from that poison. Though, when it comes down to it, he's really designing the devices so that his side of whatever war may be around the bend can survive gassing the other side.

After a brief introduction at the gas mask factory, Glauco returns home. There, he visits with his druggy wife (Anita Pallenberg, sexy paramour of Rolling Stones-guitarist Keith Richards), rejects the dinner left out for him, and makes himself something else instead. (In foreshadowing to La Grande Bouffe, Piccoli stares at pictures of meat in a cookbook the way other men stare at pornography.) In the midst of cooking, the maid Sabina (Annie Girardot) comes home. Glauco also goes looking for some spices, and in the closet, he finds a mysterious bundle. It's a pistol wrapped inside a newspaper with a headline announcing the death of legendary gangster John Dillinger. Glauco dismantles the gun, reassembles it, and paints it red with white polka dots. He also has his dinner and watches some home movies, sometimes molesting the screen, sometimes reenacting what he is seeing.

In the midst of this, Glauco also spies on the maid, and then tries to have sex with her after he fails to wake his wife up to do it. As the man of the house, Glauco is a predatory but ultimately impotent lion. He stalks around, but he gets little attention and little respect. Maybe that's his lot in life. He doesn't kill, he just enables other men's success on the battlefield. Sabina uses the telephone to talk to her secret lover, and Glauco's wife uses her own modern toxins to dismiss him.

This is all told in exacting detail, step by step, with many of the tasks shot in real time and without interruption. The action is accompanied by a steady stream of contemporary songs broadcasting over Glauco's radio, many of them lyrically apropos to what is happening. As the film rounds its final corner, there is even one shocking act that so surprised me, I jumped in my chair. Without giving too much away, let's just say that gun in the first act definitely paid off in the last one.

To what end, though, I really don't know. The events of Dillinger is Dead are seemingly random, accurately portraying an aimless night, but maybe they are not. Maybe there is some complex code here that I am meant to put together were I so inspired. I would make a go at it if I were being graded, but I'm not, you are, Maestro Ferreri, and you've done nothing to compel me to want to understand Dillinger is Dead more. The way I see it, it's your job to make me want to know what it all means, not mine to find a reason for your film existing. That's the pact you make with the audience: we're willing to do the work, you just have to make it worth our while.

What's odd is, I didn't hate Dillinger is Dead. I wasn't bored by it, nor did I find it tedious. The set designs, with the cool '60s furniture and the vivid colors, were easy on the eyes. Similarly, Piccoli is an actor worth watching. He is extremely confident in front of the camera and comfortable in his skin. His every move is natural, he's not shackled by actorly gestures. There is talent here, it's just not sufficiently focused in such a way as to make me care.

The back cover of the DVD calls Dillinger is Dead "a surreal political missive about social malaise," a description that brings to mind Luis Bunuel's The Discreet Charm of the Bourgeoisie. That is a film I very much enjoy, probably because Bunuel's pranksterism and point of view give the viewer something to hang their hat on. In his essay in the Criterion booklet, critic Michael Joshua Rowin suggests that Ferreri had no such interest in giving his audience the same courtesy. He labels Dillinger is Dead as intentionally irrational, designed to duck away from any one interpretation and leave itself open to varying opinions and arguments. In one of the interviews with Ferreri reprinted in the same booklet (okay, I guess I did at least do some of my homework), the director states that "ambiguity" is Dillinger is Dead's reason for being.

So, I guess mission accomplished, then? 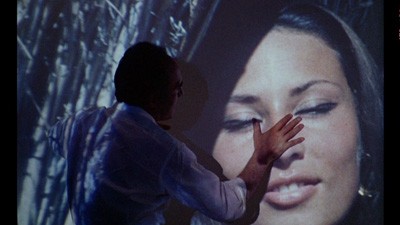 Video:
One thing that is not ambiguous is how good the DVD image for Dillinger is Dead looks. The 1.66:1 transfer was overseen by cinematographer Mario Vulpiani and the final result is a beautifully rendered, richly realized picture. The colors are strong, equally vivid in both the light and the dark zones, and the resolution is finely sharpened.

Sound:
The mono soundtrack is very good. The tones are warm, and the little background details, the sounds of Glauco's nighttime activities, clearly distinguished from the near-constant music.

Dillinger is Dead is in French with optional English subtitles.

Extras:
As noted above, there is a thick booklet included with a new essay and two vintage interviews with Marco Ferreri. There are also photos, chapter listings, and credits.

There are several extras on the DVD as well, all of which should aid anyone with more passion for Dillinger is Dead than I mustered to dig deeper into the movie. (Though I have watched them, I did not do so before writing my above text, and so I let my initial impressions stand as they are.)

First up are new video interviews with Michel Piccoli (12 minutes, 48 seconds) and Italian film historian Adrian Apra (20:51). Piccoli speaks of great affection for the director, with whom he made six films, Dillinger is Dead being the first. He speaks eloquently about what drew him to this project in particular and Ferreri as an artist overall. Apra talks about the historical significance of the film, both in terms of cinema and of the social conditions that spawned it, as well as the greater impact of Marco Ferreri's career.

In addition to these pieces is a 13-minute, 14-second excerpt from a 1997 discussion about Ferreri featuring directors Bernardo Bertolucci and Francesco Rosi, amongst others, and peppered with clips from interviews with the late subject, who had died just prior to this sitdown at Cannes.

Lastly, we get the movie's theatrical trailer.

FINAL THOUGHTS:
Saying that a film isn't for everybody is a cheap and overused critical ploy, and one that would have more meaning if it were saved for movies it truly describes. Dillinger is Dead is one of those movies. I have a hard time knowing who it's for, actually, my guess is that it appeals to only a scant few--all of whom I would imagine would strongly disagree with everything I've written here. And good for them. I'm sure the one thing we could agree on is that you should Rent It and see if this obtuse, surreal exercise in cinematic rigor is for you. Find out for yourself if you're one of them, or one of me. 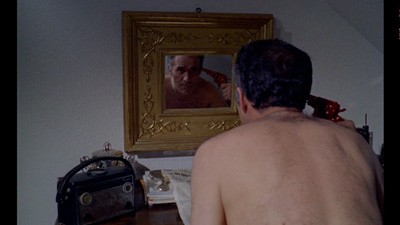