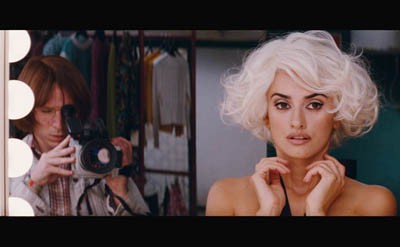 I doubt I'm the first to compare Pedro Almodóvar to Woody Allen, and I'm sure I won't be the last, but there is something similar about the reliability of these two far-flung auteurs. While Almodóvar does not maintain Woody's rigorous movie-a-year schedule, which may explain his so far avoiding the extended creatively fallow period that Allen suffered through the late '90s and early '00s, like his New York doppelganger, Pedro's product is consistently entertaining, sticking to the writer/director's particular peculiarities (or are those peculiar particulars?), refining a world and a point of view all his own.

Almodóvar's new film, Broken Embraces, is the second in his recent extended collaboration with actress Penélope Cruz. (Allen snuck in there in between to use Penélope in his delightful Vicky Cristina Barcelona.) It's a genre mash-up, blending elements of thrillers and romantic melodramas in a way that isn't dissimilar to, say, Match Point (to keep this comparison in the air). Broken Embraces concerns itself with two separate timelines, telling the story of movie director/writer Mateo Blanco, a.k.a. Harry Caine (Lluís Homar), a blind author whose eyesight, as it turns out, was lost in 1994 while making his last film, Girls and Suitcases. Harry has cause to revisit those times when he learns of the death of an international financier, Ernesto Martel (José Luis Gómez). Martel was the producer of Suitcases, and his mistress, Lena (Cruz), was the star. His son, Ernesto Jr. (Rubén Ochandiano), documented the filming with his video camera, and he re-emerges as Ray X., looking to enlist Harry in making a new film destroying dear ol' dad's reputation. Harry refuses.

More of the story is revealed the deeper everyone digs. Harry's manager Judit (Blanca Portillo) was always suspicious of Lena, and Ernesto Jr. coming back around unnerves her. A lot of the questioning comes from her son, Diego (Tamar Novas), who wants to know why both Ernestoes are so dangerous. The intrigue between Martel, Lena, and Mateo/Harry, as well as little Ernesto's creepy obsession with filming everything, calls to mind Hitchcock, and Almodóvar makes a direct reference to Michael Powell's Peeping Tom. There is also a passing mention of Douglas Sirk's Magnificent Obsession amidst other DVDs on Harry's shelf, and I can definitely see Almodóvar paying homage to that kind of melodrama. He's also casting an eye backwards at his own past, invoking his 1988 film Women on the Verge of a Nervous Breakdown in the movie within a movie, the one that Lena is starring in, her escape from being a kept woman. Another film reference is the name Severine, Lena's pseudonym early in the movie when she considers working as a call girl. Severine was the name of Catherine Deneuve's housewife-turned-hooker in Luis Bunuel's Belle de jour. 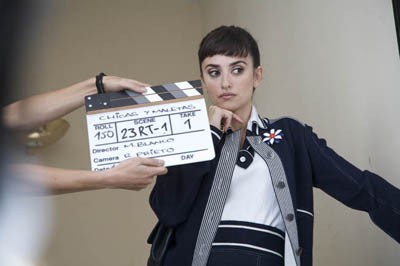 Pedro also gets his kicks dressing Penélope Cruz in wigs and outfits reminiscent of Audrey Hepburn and Marilyn Monroe, scenes that serve no real purpose except for Penélope Cruz to look lovely. And, of course, she does. The actress underplays the role, letting Lena be mysterious and alluring, letting her natural sex appeal sell the image. It's almost like Almodóvar is showing us that he knows better than to tart her up, he need not rely on those tricks. Cruz creates an invisible yet believable transition between the younger Lena whose desperation is preyed upon by the elder Martel and the more learned Lena who has accepted her role as his mistress, only to reveal that the vulnerable girl is still lurking underneath. Naturally, the actress is the sun around which all the rest of the cast orbits, and they are all good in support of her. Only Rubén Ochandiano distinguishes himself one way or the other, overdoing his swishy villain, his mincing a little too self-conscious to be dastardly. It's a weird misstep for Almodóvar to let slip through, letting one actor go over the top when he keeps the rest of them in such control.

That's not the only bump in the road, either. Broken Embraces could have been a leaner film. Almodóvar's script meanders some, taking a little too long with those movie references, and even showing us unnecessary glimpses of Girls and Suitcases. We are meant to see the difference between two takes of the same scene, and it's definitely there, but the scene itself isn't that great, nor does it actually add to the meaning of the movie. If you're going to go meta this way, the false fictions should inform one another. There is also some unnecessary business with Diego mixing potentially fatal narcotics that is used as an excuse to bring him and Harry closer together. The bonding we already saw between them when they were working as writing partners was more than enough, and it's a good example of some of the extraneous material that could have been trimmed.

I would consider such mishaps to be minor, however, and not enough to ruin one's enjoyment of Broken Embraces. The overall plot is solid, and Almodóvar skillfully works his various genres, cooking up an old-fashioned potboiler while adding his own particular spice. The characters go through some real changes, and Harry/Mateo finds true closure in the end, the riddles of his lost love and his lost masterpiece finally solved. It makes for a particularly satisfying fade to black, one that makes Broken Embraces feel substantial and fulfilling despite all its frivolities.