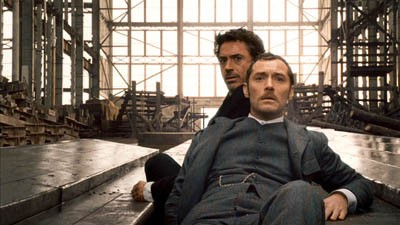 Breed a one-trick pony with a thoroughbred, and no matter how strong the bloodline of the good horse, the offspring is likely to come out dancing a short-legged jig. Though Guy Ritchie has often skated by on a reputation of being Quentin Tarantino with a British accent, I think it's time we reassess that. He's more like the Cockney Troy Duffy.

For his new movie, Ritchie tackles Sherlock Holmes, presenting us with a modern reimagining that is neither clever nor intriguing. His notion of updating the characters of Holmes and Watson is to make them rogues who can't get their crap together. Holmes is a crazed egomaniac who spends most of Sherlock Holmes being petulant about the fact that his friend has a girlfriend. What is this, the Little Rascals? They should have called the secret society at the center of the movie's plot the He-Man Woman Hater's Club.

In Guy Ritchie's version of late 19th-century London, Sherlock Holmes (Robert Downey Jr.) is a minor celebrity who, if we judge from the opening sequence, is kind of like a pulp serial adventurer, saving kidnapped girls from ritual sacrifices by the hands of the likes of Lord Blackwood (Mark Strong, Body of Lies), a nobleman who dabbles in the dark arts. Holmes rushes in blindly, using his keen intellect to anticipate the outcome of any impending battle--something relayed to us in slow motion and then shown again in hyperkinetic fast-mo so we can see how it works. Dr. John Watson (Jude Law) comes crashing in behind to bail his cohort out when he's in over his head, and the police, lead by Inspector Lestrade (Eddie Marsan, Happy-Go-Lucky), arrive when it's all done, suffering the barbs of the vainglorious detective.

If this beginning strikes you as loud and chaotic and off-putting, then you may want to consider getting up and seeing if it's not too late to get a refund for your ticket. It's how the start of Sherlock Holmes struck me, and the movie never really recovered. In fact, it just felt like two hours of those same five minutes played over and over until the clock ran out.

Blackwood is tried and hung for the murders he has committed, but when he comes back from the dead, Holmes follows his trail to discover he is part of a large conspiracy, a secret Order on par with the Masons. Watson tags along, though reluctantly. He repeatedly quits and then is repeatedly lured back into the fray by Holmes' shenanigans. These guys are the Riggs and Murtaugh of the Victorian crime scene. Fingers crossed that they get Joe Pesci for the sequel. Joel Silver produced both Sherlock Holmes and the Lethal Weapon series, so anything is possible!

The plot grows more complicated when the one person that could best Holmes, and maybe the reason he drinks too much and engages in bare-knuckle boxing, returns. Irene Adler (Rachel McAdams) broke the gumshoe's heart, and maybe that's why he is so disdainful of Watson's forays into love. She's a brilliant thief, and the two of them regularly tango, fighting over which dancer gets to lead. She is back in London on the behest of a mysterious client that, of course, turns out to be Professor Moriarty. That's not really a spoiler. If you know Holmes lore, you'll see it right away; if you don't, the revelation at the climax of the movie won't mean a thing to you anyway. 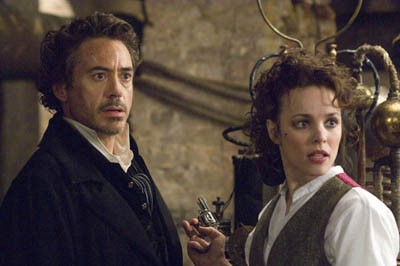 In terms of acting, McAdams and Downey Jr. are not as well matched as their fictional counterparts. I normally like the actress, she was good in movies like Mean Girls and Red Eye, but she's pretty awful here. I didn't believe a word that came out of her mouth, and she never struck me as smart enough to actually give Holmes a run for his money. Robert Downey Jr. in the lead is good, but he's been better. There's not much nuance to this part as it is written, and he plays Holmes as if the detective were on cocaine the whole time. He's sweaty, twitchy, talking fast. Back in the day, when Sir Arthur Conan Doyle created him, Holmes actually liked to dabble, so I wouldn't be surprised if we were meant to infer that the character is up to something when he locks himself away in his room, even if the movie is too chicken to mention it. It would certainly explain the manic spells Watson mentions him having. It would just be nice if maybe he came down off it every once in a while. After all, Holmes also used opiates to take the edge off.

But then, for the character of Holmes to pause, the movie Sherlock Holmes would have to pause, as well. It never does. It's just one jackhammer sequence after another. The speakers are constantly rumbling, and the screen is consistently filled with chaos and debris. The senses quickly grow dull to what Ritchie is trying to sell us. Between being over-choreographed and the cold perfection of all the computer graphics, none of the action sequences have any sense of danger. It's all too precise, all too clean, the chaos has been put in order and it's dull. If you're going to take a detective series and turn it into action movies, at least make it decent action. Don't misunderstand, either, I'm not a Holmes expert, so I don't have any deep-seated reason to be against an alternate version of the character. I just don't see the point of harnessing Doyle's considerable legacy and being so unimaginative with it. You'd think with four writers laboring over the script, somebody would have come up with something convincing.

To be fair, I should probably point out that I have yet to like a Guy Ritchie movie. I even poo-poo the much-revered Snatch, which to me is a lot of empty style adding up to not very much. I am sure this will change how much credence some folks reading this will give my opinion. I think Sherlock Holmes just confirms my assessment of the filmmaker. It's his biggest picture yet, and though I actually went into it thinking it at least would be fun, Sherlock Holmes is proof that you can throw as much money as you want toward making a blockbuster, but you still can't create true talent where there is only a soulless approximation of the same. This horse looks like it can run, but its limbs are stubby and can only make do with hobbling along.