Loss of a Teardrop Diamond, The 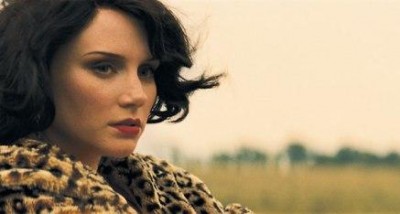 Fisher (Bryce Dallas-Howard, Manderlay) is a spoiled Southern girl of the jazz age. The wild young lady has just returned from being educated at the Sorbonne, which, as she is fond of reminding everyone, is in Paris. She has come back to Tennessee to stay with her Aunt Cornelia (Ann-Margret) just in time for the fall debuts of the local Memphis girls. The only hitch is that Fisher needs a date to all these parties, a tough prospect when your daddy is as unpopular as hers. Earlier in the year he blew up a levy and flooded a bunch of properties downriver from his estate, killing two men.

Fisher is as upset with the old man as anyone, but none of these small-minded small-town folk care, the blood connection makes her one and the same. So, she hires Jimmy Dobyne (Chris Evans), the handsome grandson of the governor, who himself knows a thing or two about parental blowback as anyone. His mother (Barbara Garrick) is in a mental institution and no longer recognizes her own son, and his father (Will Patton) is a drunk. Despite the position of the elder Dobyne, the younger Dobyne and his child live in poverty. A new set of clothes and a stipend for driving a pretty girl to parties is not the kind of work an upstanding young man like Jimmy desires for himself, but it's something.

This is the basic scenario that The Loss of a Teardrop Diamond is built on. As the title suggests, things eventually go awry when, at a Halloween bash north of the river, and thus apparently welcoming to Fisher, the girl loses one of the expensive earrings Aunt Cornelia has loaned her. Miscommunication causes Jimmy to feel accused of having stolen it, and bruised feelings lead to an unraveling. Fisher wasn't just studying overseas, she was trying to settle her frayed nerves.

Though the revelation of Fisher's mental instability comes a little out of left field, it's not exactly a surprise. The Loss of a Teardrop Diamond was an unproduced screenplay by the great Tennessee Williams, written shortly after the cinematic success of his play about another unhinged Southern belle, A Streetcar Named Desire, in 1951. The film was to be directed by the same director of Streetcar, Elia Kazan, for whom Williams also wrote the screenplay for his controversial 1956 film Babydoll. For a variety of reasons, cameras never rolled on Teardrop Diamond, not until 2008 when actress Jodie Markell took over the project. It's kind of amazing that it took so long.

The Loss of a Teardrop Diamond is, in some ways, Tennessee Williams by the numbers. A misunderstood girl, a misunderstood guy, mysterious secrets, buried sexuality--these are all things we've come to expect from the playwright. The familiarity isn't necessarily a bad thing. There is something as comfortable about this movie as there is about seeing a good restaging of any of his famous plays. The problem is it's hard to tell how far along Williams was in the process of writing the movie. Many scenes in The Loss of a Teardrop Diamond come off as rough drafts. Fisher is not a dumb girl, for instance, so it's kind of weird that it takes so many different people explaining to her how she offended Jimmy. Other times, references to things that would have been too scandalous to mention on screen in the 1950s come off as more apparent due to their lack of underlining; I can't help but feel Kazan would have gotten the writer to finesse it a bit more. Also, if one more person said the phrase "teardrop diamond" one more time, I think I would have screamed.

Yet, there is something undeniably alluring about Markell's production. Working with cinematographer Giles Nuttgens (who also shot Deepa Mehta's Fire/Earth/Water series), she has created a film that is gorgeous to look at, full of beautiful skies, ornate set pieces, and meticulously designed costumes. She has also assembled a cast that is extremely easy on the eyes. At times, I had a hard time telling if the movie was actually good or if I was just hypnotized by Bryce Dallas Howard's remarkable beauty. I found myself just staring at her red lips, admiring the shape of her mouth. Which isn't to say she is just a pretty face (that's a distinction reserved for Chris Evans). Dallas Howard has the potential to be one of our great American actresses, and it's nice to see her in something more substantial than the underwhelming big-budget effects pictures she often ends up in (Spider-Man 3, Terminator: Salvation, a couple of M. Knight Shyamalan stinkers). Much of the movie plays across her face, and any emotional cue that is necessary is right there between her brows. (It's also easy to believe that she is somehow related to Ann-Margret, who is still a phenomenal beauty herself, even as she approaches her 70th birthday).

I think the problem with The Loss of a Teardrop Diamond occurs with what should have been it's bravura scene. After the earring goes missing, Fisher goes into the party anyway, and she is summoned upstairs to see her hostess' ailing grandmother (the always wonderful Ellen Burstyn). The older woman, Addie, is suffering from a stroke and is also an admitted opium addict. Addie believes she has something in common with Fisher, and so she shares her secret with the girl; quid pro quo, Fisher shares her secret with Addie. A writer used to producing for the stage, Williams naturally gave his lead actress one great monologue, and Markell thinks she is honoring the work by dimming the lights and pulling Dallas Howard into a kind of isolated fantasy. It's a jarring transition, and the only scene like it in the movie, and by shining a spotlight on this scene in this way, Markell exposes the fact that the story's main theme, that madness is a kind of dreamer's disease and Fisher is a girl isolated by her desires, is not really integrated with the rest of the drama. She is a Blanche Dubois without the history.

Lost literary works are a big thing right now. There are posthumous, unfinished novels by the likes of Vladimir Nabokov, Graham Greene, and Ralph Ellison either already on bookshelves or coming later this year. Digging through the ashes of an author's estate has become big business. These things rarely end up being the missing masterpieces we hope they are. At best, they end up being like The Loss of a Teardrop Diamond: an interesting snapshot of what might have been, not exactly adding to the legacy of the author but not really harming it either. Who knows what Tennessee Williams might have done with his screenplay had he seen it all the way through? As it is, it's a good enough movie, but one full of potential it will never realize.