Tell Them Anything You Want: A Portrait of Maurice Sendak 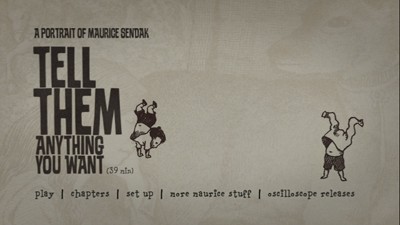 When Spike Jonze's adaptation of Where the Wild Things Are was released this past autumn, author Maurice Sendak was asked how he would reply to parents who said the film of his classic children's book was too scary. His answer: "I would tell them to go to hell...Go home. Or wet your pants. Do whatever you like."

This shocked many--mostly parents, of course, and they probably needed to hear it--while it delighted the rest of us. Who was this cantankerous old man who clearly didn't give a damn what people thought of him or his work? Well, that query is answered in sublime detail in Tell Them Anything You Want: A Portrait of Maurice Sendak, a 40-minute documentary by Jonze and indie filmmaker Lance Bangs. The film takes some time out with the author and illustrator of Wild Things and In the Night Kitchen, now in his 80s, and gives us an unvarnished glimpse of a creative talent and how he views the world.

There isn't much to analyze here. Tell The Anything You Want is made up entirely of conversations Jonze had with the author over the last several years. Subjects include his childhood, his inspiration, and most of all, death. Sometimes hilariously so, especially in a montage where Jonze and Bangs show us just how often Sendak told them he was ambling toward Death's Door. It's morbid, yes, but not seriously so. As with any artist who is aware of the darker things in life, Sendak is also aware of the lighter things. Though Sendak claims he is never truly happy, he speaks with equal candor about what he is fond of as he does what disappoints or scares him. The filmmakers cobble his stories together with photographs and illustrations and arrange the material so we can see how a strange child of the 1930s became such an influential voice in illustrated literature. His fascination with the mysterious and the strange is what makes him so enthralling as a storyteller, and it's why his work resonates with youngsters, who are fascinated with the unknown and mortality. It's a myth that kids believe they will live forever, they know there is much in this world to conquer. Conversely, they also know to have a good time and forget it. The wild rumpus!

Tell Them Anything You Want: A Portrait of Maurice Sendak may be short, but it makes the best of its concise running time. It's funny, chilling, hopeful, and sad. Bangs and Jonze build to an emotional climax, and I got a little teary eyed as Sendak took stock of what has really mattered to him in his eight decades on this planet. In his own grouchy way, Maurice Sendak is as enchanting as the stories he's told. Arguably, there is no differentiation between the man and his imagination. The work is a product of him, and he is a product of the work, and Tell Them Anything You Want ends up showing us exactly how. 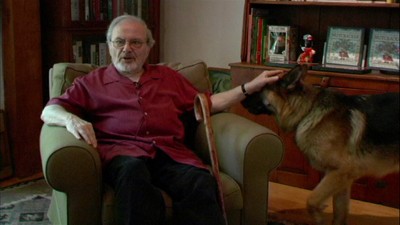 Video:
Shown in a 1.78:1 anamorphic transfer, Tell Them Anything You Want: A Portrait of Maurice Sendak looks fantastic. Nice colors, sharp resolution--really nothing to complain about. Top of the line.

Sound:
The audio is mixed in 3.0 surround and is really good. It's mostly talking heads, but the volume levels are clear, and there is a natural atmosphere to the conversation. Optional subtitles are available in English.

Extras:
As with all the Oscilloscope Laboratories releases, Tell Them Anything You Want: A Portrait of Maurice Sendak is packaged in a multi-faced book made of recycled materials, with an outer slipcover and printed liner notes by playwright Tony Kushner (Angels in America). The package design is fantastic, with photos and Sendak art used creatively and playfully. 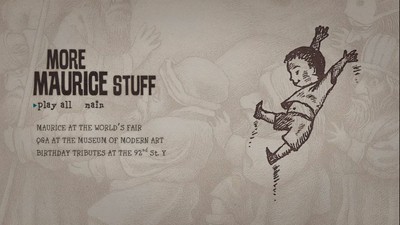 The first of three extra video features (playable at once or separate) is a cute short film, "Maurice at the World's Fair" (3 minutes, 25 seconds), made from one of the stories Maurice told Jonze and Bangs, and featuring silent-film re-enactments with those two and Catherine Keener playing all the parts.

A q&a from the Museum of Modern Art featuring Jonze and Sendak talking about this documentary and the film Where the Wild Things Are, which was about to premiere, runs 28 minutes and 35 seconds. The main topic is collaboration, which extends into many expressions of the friendship between the two men.

The final extra is a selection of speeches and tributes from a night put together by Tony Kushner for Sendak's birthday. 17 minutes, 50 seconds in all, they feature the following: James Gandolfini reading In the Night Kitchen, Meryl Streep reading The Sign on Rosie's Door, Catherine Keener reading a speech Sendak gave when he received the Hans Christian Andersen Award, and a farewell thank you from Sendak himself. The stories are multi-media, and there are cutaways to the art from the books.

FINAL THOUGHTS:
Highly Recommended. Tell Them Anything You Want: A Portrait of Maurice Sendak is a must-have for fans of Where the Wild Things Are, documentaries about artists, or anyone who admires truly special personalities. This poignant tribute to the creator of some of the most beloved illustrated books on the shelves is a perfect companion to the Spike Jonze adaptation of Wild Things, but also stands alone as a compelling piece of work. It'll provoke your thoughts, evoke laughter, and you might even shed a tear or two. The best of the best. 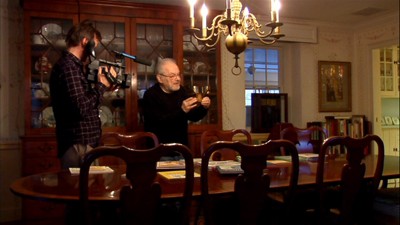