While Spike Jonze has been building a mountain of critical praise for himself and his films, another director with a unique vision (namely Wes Anderson) has been making films that have earned their own acclaim. Yet oddly enough, both individuals found themselves adapting beloved children's books into film; Jonze doing a live-action treatment of Maurice Sendak's Burn After Reading) is an accomplished chicken robber who ultimately gives up his successful occupation because Mrs. Fox (Meryl Streep, Julie & Julia) is pregnant with their child. Twelve years later, Mr. Fox is earning steady money as a food critic. Their child Ash (Jason Schwartzman, Rushmore) is nice enough, but if he were human, he'd be sitting alone at the cafeteria lunch table because he's a little eccentric. His lack of social skills and general "cool" qualities are made all the more apparent when his cousin Kristofferson (voiced by Anderson's brother Eric) temporarily stays with Ash and his family. 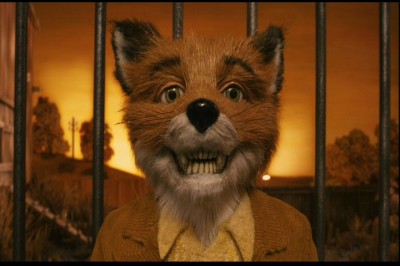 Mr. Fox has not fully reconciled his previous life and buys a home in a tree that is within range of Boggis, Bunce and Bean, three farmers with chicken houses, basements filled with apple cider and meat lockers of food that the Foxes could live off for the rest of their lives. However, Mrs. Fox made Mr. Fox promise before Ash was born that he wouldn't steal again, so he does what he can to work around this promise and avoid putting his family in danger.

Recently, Anderson's films have had a tendency to get lost in their own universe, which isn't necessarily a bad thing; in The Life Aquatic and The Royal Tenenbaums this trend includes poignant moments, and when combined with Anderson's comic sensibilities, makes for fun movie-watching experiences. However, The Darjeerling Limited lacked this effectiveness and humor; maybe it was because Aquatic co-writer Noah Baumbach (The Squid and the Whale) wasn't with Wes on Darjeerling, but who knows. 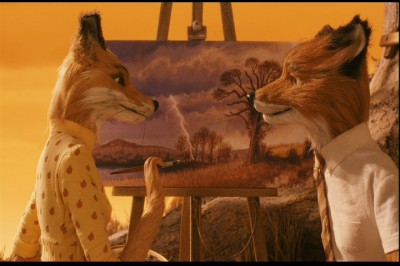 Nevertheless, Anderson's storytelling prowess is perfect for Dahl's story. Scenes that feature Mr. Fox and his accomplices reviewing a master plan to break into a chicken house using drugged blueberries had to have been pulled from an Anderson script. As in his live-action films, characters consider their motivations, and the use of music in his films remains outstanding, as you'll likely not find better uses of "Street Fighting Man" or "Let Her Dance."

Above all things though, it retains the little moments of power that appear in elsewhere in his work. For example, Mr. and Mrs. Fox discuss their relationship, and Mrs. Fox is hurt by her husband's betrayal, so when she asks why he did what he did, his reason is simple: "Because I'm a wild animal." This straightforward and honest truth isn't stated like this elsewhere during the film, but the concept behind it is apparent in earlier scenes, as well as a humorous scene-ender. However, the point is that they are who they are, and nothing can really change that. 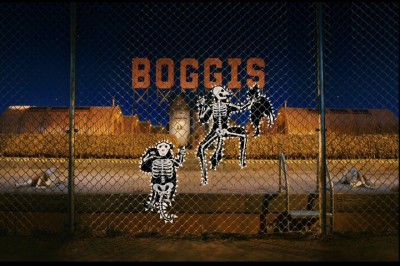 Along with the way Anderson tells the story, it's illustrated just as superbly. Whether it's the use of many warm colors, or the casting of Life Aquatic co-star Michael Gambon, the movie feels in many ways like it is a retelling of Dahl's story in his own words, it feels that British. While watching it, I felt like a kid again, as if my British mother was telling me the story of Mr. Fox. The dialogue contributed to this feeling, too, even as words like "existentialist" or "subtext" are being tossed around. Tangentially, I think the film's lack of box office success was due in part to incorrect marketing. It's less of a children's film and more Wes Anderson's take on a children's book, and it hits all the right notes in the process.

So while this film and Wild Things may have been financially disappointing, Wes Anderson and Spike Jonze continue to excel in their craft. For Anderson, Fantastic Mr. Fox is one that will remain among his best work for years to come. It has many of the Anderson trademarks fans will know, and in this format, it is like rediscovering his work once again. The Blu-ray Disc:
The Video:


Presented in 1.85:1 widescreen using the AVC encode, it's hard to find any substantial fault with The Fantastic Mr. Fox. There's a certain old-fashioned feel with a stop-motion film, even if it was shot in 2009, and this is replicated nicely; it looks much better on a digital medium than on film because you see much more detail. Like similarly produced films such as Coraline and Corpse Bride, this film looks stunning.


The DTS-HD Master Audio 5.1 surround lossless track isn't called upon for a lot of work, but there's more subtlety and effective directional activity rather than full-blown sonic love. When the terrible tractors start trying to dig the Foxes out from their tree, the rumble from the low-end is present, but the noise comes from the auxiliary channels. Characters moving in and out of frame or uttering off-frame dialogue are panned and placed when they need to be, and dialogue sounds strong and balanced in the center channel. Solid stuff here.


I cry the tears of woe into the pillow of regret, for since Anderson's films have been released by Fox, they lack the Criterion Collection treatment given to his first three films. C'est la vie, but what's here isn't bad. The only piece is "Making Mr. Fox Fantastic," a six-part featurette outlining the film's production that runs about 45 minutes.

First off is "The Look of Fantastic Mr. Fox," (8:12) which looks at Dahl's work and recalls the challenges on set, but also shows some of the work involved in making the sets, and the crew discuss some of their favorites. "From Script to Screen" (7:00) explains just that, as Wes talks about what was pulled from the book and how it was adapted, but the crew talk about his approach, including some self-shot footage that helped with the storyboard process. "The Puppet Makers" (8:21) shows how the crew made some of the puppets, from molding to hair placement and everything in between. "Still Life" (7:23) illustrates the arduous process of getting all the stop-motion stuff done and discusses some of the on-set protocols designed to maintain integrity of a photographed scene. "The Cast," (6:34) mainly Clooney and Murray, are shown getting all of their voice sessions done and how was accomplished, while "Bill and his Badger" (7:37) shows Bill Murray, the voice of Badger, as he walked around the set with Wes. Overall, it's not a bad compilation of material. 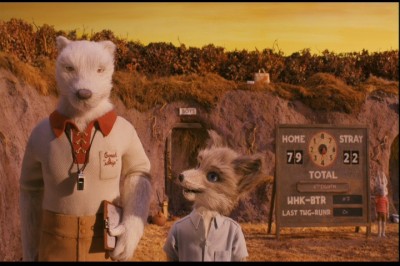 And yet there's more! "A Beginner's Guide to Whack-Bat" (1:12) is a seriously filmed piece on the fictitious game, while "The World of Roald Dahl" (3:00) appears to be the obligatory author tribute piece. The trailer completes the extras. Additionally, like Warner, Fox has included a standard-definition copy of the film (where ye olde screen grabs are from) and a Digital Copy for your preferred portable device. Unlike Warner, these copies are on separate discs for a three-disc package.


I've seen The Fantastic Mr. Fox three times now both in theaters and at home, and I enjoy it more with each viewing. The characters are well-written, funny, and the storytelling is similar to other Anderson films. Plus, the nature of the format allows them to express what Anderson wants as purely as possible. Technically the film is solid, though I'd like to have a few more supplements put on the disc. Nevertheless, I'm very happy with the package and encourage everyone to buy it. 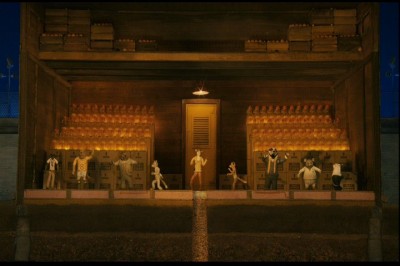