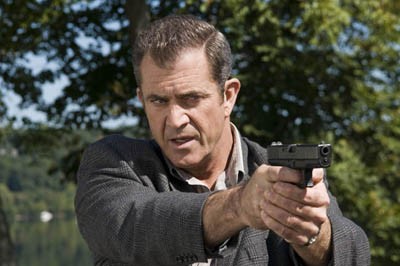 I don't want to freak anybody out here, but Mel Gibson wants revenge.

Yes, the star of films like Payback and Ransom and more revenge fantasy pictures then you can even remember is back after a long hiatus, and he's looking to take out some bad guys. Specifically, bad guys who killed his daughter. You don't mess with Mel's family. He might just whip a Boston accent out on ya.

The architects of Mel's revenge are director Martin Campbell (Casino Royale) and writers William Monahan (The Departed) and Andrew Bovell (Lantana), adapting the Campbell-directed BBC TV series Edge of Darkness into a not-so-tight two-hour movie. Mel is a guy named Craven, a police detective with a notable record and a widower father. His grown daughter, Emma (Bojana Novakovic), is a smart girl with a masters in science who works in the city, and she's home on an all-too-rare visit with dad when nosebleeds and vomiting suggest maybe she should take a trip to the hospital. Which is a good plan, because she's about to be shot on dad's front steps and needs more medical help than she originally thought. An autopsy, to be exact.

It's believed that Craven is the intended target for the shotgun blast, that the killer is some bad guy he pissed off. Digging deeper, however, suggests that maybe his daughter was the right victim. Turns out she was into something pretty heavy at the science institute where she worked, stuff that scared her boyfriend (Shawn Roberts) and may be linked to the deaths of some environmental terrorists. Dark enough stuff for the C.I.A. to hire a mercenary (Ray Winstone) to do damage control. Something is going on in them there hills, something involving nuclear power. You can tell by the way the big boss wrings his hands and eyes the world like it's his own enchilada.

That boss, Jack Bennett, is played with a little bit of ham and a whole lot of relish by Danny Huston, who sounds more and more like his father John in every picture he makes. Huston is kind of central to why Edge of Darkness ultimately doesn't work. He's a rabid dog looking for an opportunity to foam at the mouth, and Martin Campbell refuses to give him the go-ahead. Edge of Darkness is meant to be a violent pulp thriller, but it's often played like the kind of multi-part British drama it's apparently based on, the kind of thing that runs on Sunday nights on PBS between pledge drives. 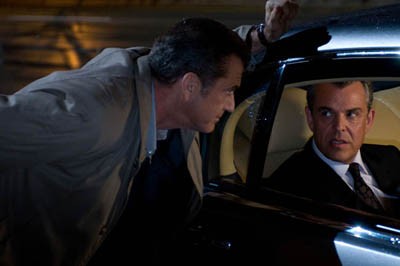 The pacing of this thing is way off. Yes, we need some slow scenes to set some things up, we need time alone with Craven and his grief. These sequences establish why he is so determined to see his quest all the way through to the end. Once the big ball of violence is rolling, though, there is no need to sit by the river and share some wine with Ray Winstone's Captain Jedburgh. Edge of Darkness was edited by Stuart Baird (Lethal Weapon, Vantage Point), and he needed someone behind him constantly clapping their hands, shouting, "Faster! Cut it! Cut it!" Baird and Campbell don't seem to understand where dramatic moments end. Too many scenes reach their logical conclusion only for these guys to hold it for another beat, and then another, to the point where even the actors seem to be wondering what they are still doing there.

Midway through the movie, when Craven decides he's not going to take any crap off of anybody--you'll know when, because he actually tells you that he's the guy with nothing to lose and doesn't give a shit--we get glimpses of what Edge of Darkness should have been. For all his time off, Mel Gibson has still got it. He's very good as the bereaved father, and despite looking every one of his 54 years, he can kick ass with the best of them. He just needs to take a breather when the fighting is done. There are several jarring moments of death dealing in Edge of Darkness, including a blood-drenched climax (the first of two, and the only one needed) that had the screening audience I was in howling with feral delight. It's a decent pay-off for a movie that has taken too long to get where it's going and isn't done meandering around. Right before it, Craven is kidnapped and escapes for no narrative purpose; right after is that second climax, one more shootout before we bring the curtain down.

You've got to wonder what the thinking was. Did anyone imagine they could somehow please the bloodthirsty hordes but also go for the awards and accolades so often denied these kind of dime-store shoot-'em-ups? It's like Craven asks the skeevy Senator who may be part of the cover up: "Do you want to be the one on the cross or the one driving in the nails?" Edge of Darkness isn't sure, and so it doesn't really succeed in pulling off either. Still, not entirely awful, and if you've missed Mel Gibson putting bullets through skulls, Edge of Darkness will give you your fix.

And if you decide you want to be the guy driving the nails, don't forget, Mel has his own brand of cross spikes left over from The Passion of the Christ and priced to move. That dude never misses the opportunity to cross-promote!