Fox // PG-13 // April 6, 2010
List Price: $24.99 [Buy now and save at Amazon]
Review by Stuart Galbraith IV | posted May 2, 2010 | E-mail the Author
Still director Ron Howard's best film to date, Cocoon (1985) is blessed with a clever, humanist script and charming performances from an ensemble cast that compensate for its few deficiencies. In a sense the film plays to Howard's strengths: like most actor-turned-directors, the former child star pulls consistently good performances from his casts, and he's good at coordinating complex technical/production issues. After a good start with Grand Theft Auto (1977), the oddly likeable Night Shift (1982), and his breakthrough Splash (1984), Howard has with an exception or two unfortunately steered toward much less interesting high-concept work ever since, a reliable journeyman rather than an innovator, a 21st century Norman Taurog. 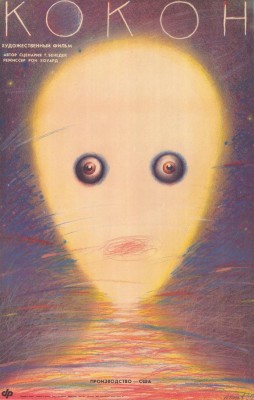 But just about everything comes together in Cocoon; audiences in the summer of 1985 adored it, and on Blu-ray a quarter-century later the film almost hasn't dated at all. It was a huge hit, prompting a sequel, winning awards, solidifying Howard's career and revitalizing those in the cast, and yet David Saperstein, who wrote the novel from which it was based, and Tom Benedek, who adapted it into a screenplay, remain virtually unknown and have done almost nothing since. What happened, I wonder?

The picture tells two intersecting stories. In the first, mysterious but friendly Walter (Brian Dennehy) and his three friends charter likeable loser Jack Bonner's (Steve Guttenberg) fishing boat in St. Petersburg, Florida. Far off the coast they begin hauling in what Walter describes as rare giant sea snails, but the large cocoon-like objects look like they're not of this earth. When Jack falls for beautiful Kitty (Tahnee Welch) and spies her changing her clothes through a small hole in the wall, the shocking truth comes out: the four are aliens disguised in human skins.

But, as Walter gently explains (Dennehy is really good in these scenes), they're friendly beings, merely trying to rescue friends they left behind millennia ago. The big pods literally are cocoons. Each evening, they're safely deposited in an indoor pool at a large, empty estate Walter has rented, the pool endowed with a lifeforce keeping his friends alive.

Next door to the house is a retirement community where a group of friends struggle with the indignities of old age. Joe (Hume Cronyn) and Alma (Jessica Tandy) can do nothing to stop Joe's terminal cancer; Bernie (Jack Gilford) watches helplessly as his wife, Rosie (Herta Ware) slowly succumbs to Alzheimer's; Ben's (Wilford Brimley) eyes are failing and he loses his driver's license. The men's one pleasure is sneaking next door to use the pool. When Walter and his group arrive, the old men continue sneaking into the house, despite the growing number of pods they must share their swims with. But the lifeforce in the pool begins to affect them, too. Joe's cancer vanishes, Ben's eyesight is restored and the men feel decades younger. The pool is a veritable fountain of youth.

The script's parallel stories of romance and friendship - the devoted Walter and his determination to rescue his long-lost friends, and the old folk supporting one another through the trials of aging, make Cocoon pretty irresistible. Almost everything about the film works; even the frequently annoying Steve Guttenberg is disarmingly funny in this.

The script affords everyone in its ensemble cast at least one memorable scene. Dapper Don Ameche, as Joe and Ben's roguish pal, won an Academy Award as Best Supporting Actor, probably for the scene where, his youth restored, the old man performs a spectacular breakdance before a slack-jawed group of teenagers. The poignancy of Tandy and Cronyn's real-life marriage adds to their scenes together, and there's a moving subplot involving Ben and his wife (Maureen Stapleton) and their relationship with daughter Susan (Linda Harrison) and her son (The NeverEnding Story's Barret Oliver).

Indeed, the casting across the board is pretty ingenious. Blacklist victims Gilford and Ware (Will Geer's former wife) are excellent as the most conservative of the senior citizens. Most of Howard's family, including brothers Rance and Clint, are in the film, and children of earlier stars play two of the aliens: Tahnee Welch is Raquel's daughter while Tyrone Power Jr., instantly recognizable despite a nearly non-speaking part, is a fellow alien.

Clever touches abound, from suggested links between the aliens to the mythical fountain of youth and the lost continent of Atlantis, to the camaraderie the aliens instinctively share with local dolphins.

Cocoon is marred only by a few lapses in logic - Why, for instance, do the aliens need to involve Jack at all? - and an unnecessary Big Chase, special effects-filled climax every Hollywood blockbuster feels obliged to deliver, upsets its otherwise placid tone. Mostly though, Cocoon positively oozes charm and the film holds up well today.

There's nothing especially remarkable about Cocoon's 1080p transfer except to say that it's so clean, bright, and free from age-related damage and wear as to resemble a brand-new movie. A few matte lines in this pre-CGI sci-fi tale are pretty visible, but generally even the optical effects hold up quite well. The Region "A" encoded disc offers remixed 5.1 DTS-HD Master Audio that's pleasant enough, along with 1.0 Spanish and 2.0 stereo French tracks, and optional English and Spanish subtitles.

Supplements consist entirely of previously released material (from the 2004 DVD), but there's plenty of good stuff to watch and listen to: an audio commentary by director Ron Howard and five short featurettes: the usual behind-the-scenes promo, profiles of Howard and the cast, "Underwater Training," and "Creating Antareans." All this material is in standard-def, as are the trailers and TV spots that are also included.

I hadn't seen Cocoon since its original release and was curious if it still held up. It does in spades, and this Blu-ray edition demonstrates, like its ageless aliens, how little it has dated. Highly Recommended.