City of the Living Dead

Blue Underground // Unrated // May 25, 2010
List Price: $34.95 [Buy now and save at Amazon]
Review by Stuart Galbraith IV | posted May 31, 2010 | E-mail the Author
Though curiously uninvolving and only sporadically scary, City of the Living Dead (Paura nella città dei morti viventi, "Fear in the City of the Living Dead," 1980) is a Grand Guignol extravaganza positively dripping with scenes of outrageous, memorable gore. Despite American and British-born leads and some location filming in Savannah, Georgia (for exterior scenes), this Italian-made zombie film was mostly shot in Rome under the direction of genre master Lucio Fulci.

Blue Underground's Blu-ray disc presents the film in high definition transferred from the uncensored original negative, along with gobs of extra features. 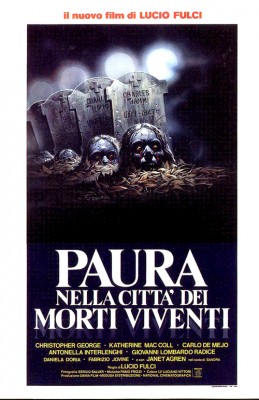 The somewhat confused script introduces several unrelated characters and seemingly unrelated events which don't connect until relatively late in the movie. At a séance in Manhattan, psychic Mary Woodhouse (Catriona MacColl) dies after experiencing a disturbing vision: in Dunwich, in New England, a Catholic priest, Father William Thomas (Fabrizio Jovine), hangs himself at the church cemetery. Later the audience learns that this act has somehow unlocked the gates to Hell.

Looking for a story, wise-guy reporter Peter Bell (Christopher George), is at the cemetery where Mary is being laid to rest. It's a good thing, too, as she unexpectedly revives after being half-buried alive. (No explanation is given for this Premature Burial/narcoleptic-like episode.) Later, she convinces him to accompany her to New England to find Dunwich and somehow close that portal to Hell before All Saints Day, when literally all Hell will break loose.

In another corner of the film, Dunwich residents Gerry (Carlo De Mejo) and Sandra (Janet Agren) are besieged by ever-increasing Hell seepage (or something), as zombies dating back to the witchcraft days of Salem (on which Dunwich was built, we're told) magically appear before their eyes along with visions of the hanged Father Thomas. Elsewhere, the zombies begin a killing spree, often grabbing the back part of their victim's scalp, prying the tops of their skulls clean off, like cans of Vienna Sausage.

Two things work against City of the Living Dead's success. First, the four major characters don't come together until very late in the story; individually, through most of the film, their actions appear unrelated. Christopher George, who apparently hated Fulci and vice-versa, seems to be acting in some other movie; his cigar-chomping reporter is a tired cliché, Hildy Johnson by way of George Segal and Elliott Gould.

Another problem is the basic concept, in which zombies and other horrific concepts tend to appear suddenly for their shock effort but with no apparent logic: they simply magically teleport anywhere they choose. This sharply contrasts the living dead in George Romero's celebrated zombie films, in which the monsters are determined but basically mindless and slow-moving eating machines. The zombies in City of the Living Dead may be stronger and move more quickly but are also less scary. With absolutely no rules to guide the human characters - they really have no idea how to close the gate - and with the zombies capable of teleporting themselves anywhere they feel like, anytime, the film has none of the impact of Romero's Dawn of the Dead (1978), its direct inspiration.

The gore is another story; it's appropriately shocking, disgusting even, and to its credit, the film does offer several scary scenes not necessarily dependent upon makeup effects. Mary's unexplained premature burial is the best of these - it's a genuinely unsettling sequence, though Fulci outrageously overplays his hand by having George almost walk away from Mary's faintly-perceptible screams about ten times. The climax, in a dank, disused crypt-cave underneath the cemetery where skeletons and zombies are poking through the cobweb infested cave ceiling, is creepy and original.

The Monsters from Hell apparently suck the very life force right out of several characters. In the film's most celebrated gross-out, a mesmerized young woman (Daniela Doria) starts bleeding from her eyes, a subtle and disturbing makeup effect. Ah, but that's only the beginning. The dedicated actress actually agreed to consume sheep entrails so that she could vomit them back up on-camera. (A prop head is used for some shots, but not most of the time. Take that, Marlon Brando!) Needless to say, the results are effectively nauseating. Other memorable moments include a mass attack by real maggots showered blizzard-style at the four principals as if by a snow blower, with some of the squirming worms glued to the actors' faces. Later in the film one victim is restrained on top of a lathe and has his head drilled clean through, in a spectacularly gory but utterly superfluous sequence.

Fulci, who makes a cameo appearance as "Dr. Thompson," is alternately innovative, sloppy, and strange with his direction. He generates some scare here and there, but in other scenes merely calls attention to the film's artificiality. In one scene, characters move back-and-forth between a kitchen and a living room while the camera follows them around the end of the flat that divides the two sets. The score by Fabio Frizzi is very much in the John Carpenter/Goblin minimalist mode.

Presented in 1.85:1 1080p high-def on a 50GB dual-layered disc, mastered from its original, unedited camera negative, City of the Living Dead looks great, with a fine, pleasing grain about it, though the fast shoot also results in some shots that are simply out-of-focus. Generally though, this is another way-above-average presentation.

Sadly, there's no Italian track but the English one is presented three different ways, in its original mono, and in newer mixes in 5.1 Dolby Digital Surround EX and 7.1 DTS-HD. Personally, I was quite happy with the mono mix and other than some pleasant directionality with some of the sound effects didn't find these mixes that great a leap, to my ears at least. Optional subtitles in English, French, and Spanish are available. .

Supplements include a detailed making-of documentary running 30-plus minutes (in standard-def) featuring interviews with the cast and crew; it's refreshingly frank (Christopher George apparently was a pain in the ass while Fulci a flat-out sadist) and informative. In high-def, Acting with the Living Dead interviews star Catriona MacColl, while, back in standard def, Giovanni Lombardo Radice is the subject of Entering the Gates of Hell, and others discuss their Memories of the Maestro, i.e., Fulci. All this material is worthwhile. Italian and English (international) trailers are included, also in high-def, along with a high-def poster and still gallery.