"We have everything here. Why go looking elsewhere?" 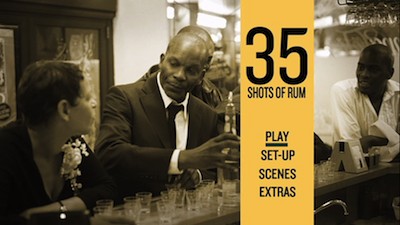 The latest film from Claire Denis, 35 Shots of Rum, trains its lens on the tenants of a French apartment building. At the center of the interpersonal drama is the old subway engineer Lionel (Alex Descas, Coffee and Cigarettes), who lives alone with his daughter Jo (Mati Diop) and who has an occasional affair with the upstairs neighbor, a taxi driver named Gabrielle (Nicole Dogué). Gabrielle pines for Lionel, but he is distant and untouchable, in charge of his own space and his emotions. It runs in the family. Another upstairs neighbor, Noé (Grégoire Colin, Nénette et Boni) has a thing for Jo, but she maybe sees a little too much of her dad in him. Ironically, the young drifter would settle down if maybe the girl would just give him the nod.

Of such simple stuff are great dramas often made, and 35 Shots of Rum observes these regular lives with an elegance and insight that ensures every small act assumes great importance. A chance encounter can alter everything, even if just for a day. A thoughtless action can break a heart, a minor gesture can invoke jealousy. The film is regularly compared to Ozu in the way it shows modern living and the schism between young and old, and that comparison couldn't be more justified. At the same time, Denis makes the genre (is Ozu a genre now?) her own by updating it. Her eye is a tad more cynical, and her character situation reversed. Rather than the older generation failing to understand the changes of the newer generation, it's Jo and Noé who are mourning lost values. Lionel may talk about stability, but outside of his homebase, he's a wanderer, tied to no one. For all his freedom, he is trapped.

Denis spent her early career working alongside Jim Jarmusch and Wim Wenders, and her films have a similar poetic laziness that draws more out of what is not said than what is. If character is action, then behavior is all that is needed to drive the plot. The way Gabrielle hangs around, nervously knocking at the door even after she has said her good-bye, or the way Lionel stares at another women across the room--these are profound moments, and in the case of the quiet man who forms the film's axis, silence is his greatest tool. As an audience, we are as compelled to watch Alex Descas as the people onscreen are compelled to watch Lionel. Some actors can draw the camera's attention just by their mere presence. Descas owns whatever space he inhabits. He doesn't have to claim it, it's just his. Yet, his most poignant moments come when he is vulnerable, playing the father realizing he could lose his daughter to another man.

Naturally, the actor is aided by the environment Claire Denis and cinematographer Agnès Godard (Golden Door) create for them. The action is staged in real locations, and the pair shoot from within the space provided. The look of 35 Shots of Rum is intimate and authentic, lending the same credibility to the performers and the story.

Keeping in line with the scale of the rest of the picture, the change that Denis and regular co-writer Jean-Pol Fargeau map out for Lionel is not a major one. Rather, it's learned and it's subtle. One of his colleagues, René (Julieth Mars Toussaint), retires early in the tale, presumably set free to enjoy life without the endless repetition of the subway routes. He doesn't go anywhere, though, he just hangs around, unsure of what to do with himself. The patterns he has established are all he knows, and he can't make a real change. His lack of purpose serves as a warning for Lionel: if you stay on the same track your entire life, you may never get to switch over to another. These are working-class versions of Ozu's salarymen: if you give your life to the job, what left do you have for yourself? The bigger life change is made by Jo, who assures her father that even though there might be other men in her life, they still will be father and daughter forever. She embraces the absolute even as she gets away from it. (Likewise, she reconnects with the past to wriggle out of its grasp.) To do otherwise is to become like Gabrielle, hung up on something she can never have.

The thirty-five shots of rum of the title is in reference to Lionel's special ritual, something he holds close and only indulges on the most special of occasions. When you consider the effects of alcohol, this too could be seen as an attempt to obliterate memories while also providing a balm that soothes one through a possibly unwanted transition. It's reckless, but so is life. We only see Lionel partake of this once, and he avoids explaining it until then, and so it's special when it happens. In a way, delving back into this drinking game suggests that maybe this is a case that the more things change, the more Lionel stays the same, and while a celebration is underway, he almost looks like he is at a wake rather than a party; at the same time, there is hope in his carriage. Acceptance. A cleansing. His head might be fuzzy in the morning--indeed, we've seen Lionel's hangovers--but once the cobwebs are clear, it's a whole new day. 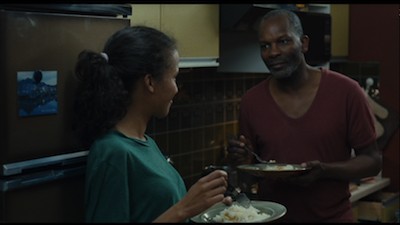 Video:
The 1.85:1 anamorphic transfer on 35 Shots of Rum looks great. The colors have a natural temperature, while the overall image has sharp resolution and a clean surface.

Sound:
The French soundtrack is mixed in Dolby digital with optional English subtitles. It's a conscientious audio track, complete with small touches of interplay between the speakers that lends a very real feeling to the movie.

Extras:
There are quite a few informative extras on this Cinema Guild release, starting with a healthy essay in the interior booklet. Written by Film Quarterly editor Rob White, it examines the Ozu connection more closely. 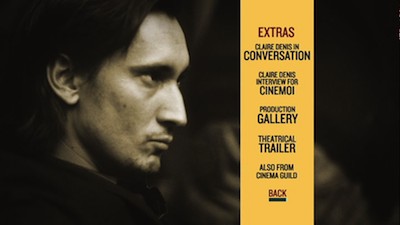 The extras on the disc are all focused on Claire Denis and are mainly two extensive talks about the movie and her work. There is a 20-minute interview from 2009 that talks about 35 Shots of Rum specifically, as well as an older (2004) conversation with Judith Mayne that looks at her previous work and her aesthetic and thematic concerns. This one runs 71 minutes.

Additionally, the DVD has a production gallery and the movie's theatrical trailer, as well as other Cinema Guild trailers.

FINAL THOUGHTS:
Highly Recommended. Silent waters run deep, and Claire Denis's quiet family drama 35 Shots of Rum says so much with so little. Focusing on four inhabitants of a French apartment building, and centering most on the stoic subway driver Lionel (played with powerful restraint by Alex Descas), Denis shows the ebb and flow of change and our resistance to it. Her characters build boxes around themselves, mistaking their private prisons for safety, and sometimes it's the older generation passing their own foibles down to the younger. Getting out of this relies on finding a balance between old and new, and in having the guts to really change. 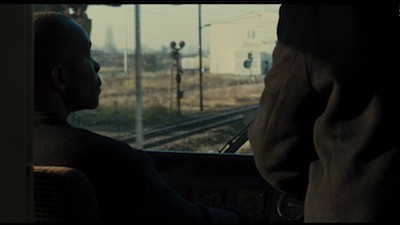