Warner Archive // Unrated // January 19, 2010 // Region 0
List Price: $19.95 [Buy now and save at Wbshop]
Review by Stuart Galbraith IV | posted February 6, 2010 | E-mail the Author
One of the best and most unique television dramas of the 1980s, Special Bulletin (1983) is an extremely tense drama about anti-nuke radicals threatening to explode a nuclear device in a major American city, its story told through simulated network news bulletins. Directed by Edward Zwick (Glory) and co-written and produced by Marshall Herskovitz (Dangerous Beauty), the experimental and groundbreaking mockumentary is much superior to the better-known but more conventional The Day After, a bigger-budgeted production that got a heck of lot more press coverage when it debuted later that same year.

Though television news graphics and technologies have evolved enormously in the nearly 30 years since its premiere, in other ways Special Bulletin hasn't dated at all, and the program remains an unnerving viewing experience. 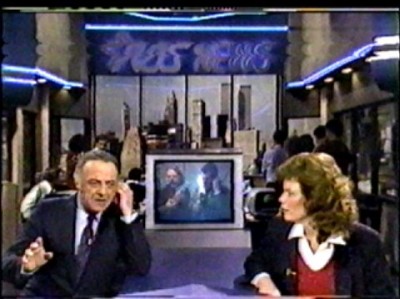 Note: The DVD picture quality is much better than this tape-sourced frame-grab would suggest.

The film has no opening credits. Instead, the first thing the audience sees is an authentic-looking network promo for various RBS programs, including Four Square (a game show) and Morningstar (a soap). Abruptly, things shift to RBS's New York news desk, where evening news anchorwoman Susan Myles (Kathryn Walker), eventually joined by co-anchor John Woodley (Ed Flanders), announce that at the Port of Charleston, South Carolina, a group of terrorists have taken a local TV news crew, including reporter Steve Levitt (Christopher Allport) and several Coast Guardsmen hostage aboard a tugboat.

Details about the terrorists gradually emerge, some residents of Charleston evacuate, but most stay put after the federal government insists Lyman and his colleagues are perpetrating an elaborate hoax. But eventually it becomes clear that some months earlier respected physicist McKeeson stole weapons-grade plutonium from a facility in Washington State, and is probably dying after exposing himself to the intense radiation while building his bomb. One guardsman dies of gunshot wounds, and as the deadline approaches and the government seems unwilling to meet their demands, the situation aboard the tugboat deteriorates and a nuclear detonation, once unthinkable, now seems inevitable.

In light of Orson Welles's infamous War of the Worlds radio broadcast, likewise presented as a series of news bulletins and which sparked a limited but nationwide panic, NBC was extremely worried Special Bulletin might spark a similar reaction. When it first aired, a disclaimer appeared at every commercial break: "The following is a realistic depiction of fictional events. None of what you are about to see is actually happening." Additionally, the word "dramatization" was superimposed several times during key moments. When Special Bulletin turned up later on pay cable television, the superimposed "dramatization" was gone and the disclaimer appeared only a few times, as is the case with this DVD version.

Although apparently some viewers still didn't get the message, NBC nonetheless went a bit too far reassuring viewers that what they were seeing wasn't real. For one thing, the story doesn't unfold in "real-time"; its story covers a roughly 24-hour period in about 100 minutes (a brief coda is set several days later), plus there's no use of real reporters or politicians, though the show does use a lot of news file footage and the network graphics and such are entirely believable. (What the show is missing is the endless waiting and regurgitation of information, which always follows events like this.)

What it does do extremely well is allow its audience to suspend its disbelief with minimum effort. The filmmakers obviously studied raw and edited news footage, press briefings, newsroom coverage, etc. during various crises. There's even a brief sequence reminiscent of Herbert Morrison's famous reporting of the Hindenburg disaster, but most of it seems directly drawn from the media and political chaos following the attempted assassination of President Ronald Reagan in March 1981. In one scene, for instance, Flanders's anchorman momentarily loses his cool live on the air, recalling ABC anchor Frank Reynolds, who was incensed by conflicting reporters about the status of wounded White House Press Secretary James Brady. (In Special Edition, there's an "Acting" White House Press Secretary, another nod to Brady's brush with death.) Flanders's character seems to be based largely on Reynolds and Harry Reasoner, who unhappily co-anchored ABC's evening news with Barbara Walters, an awkward arrangement Flanders's John Woodley shares with Kathryn Walker's Susan Myles. Walker has Walters's look, somewhat, but her delivery and overall presentation more directly recalls popular NBC weekend anchor Jessica Savitch.

Special Edition is as much a criticism of the news business as it is about the threat of a nuclear holocaust, a concern ratcheted up considerably during the Reagan years, resulting not only in this and The Day After in 1983, but also the devastating film Testament that same year and a BBC production, Threads, soon thereafter. But in its criticism of network news, Special Bulletin more closely resembles The China Syndrome (1979).

If anything, RBS's coverage is quite restrained by today's anything-goes standards; no doubt the filmmakers could never have imagined the existence of Fox News, or even CNN's routinely unethical antics. And yet it impressively captures the distressing showbiz aspects of disaster-coverage in scenes still very relevant today. For instance, McKeeson mocks RBS's cheesy animated graphics ("Flashpoint - America Under Siege") and Woodley and his unstated but just-perceptible condescending attitude toward his co-anchor. (Flanders is very good; you can read his character between the lines.) Virtually all the reporting clichés in Special Bulletin still turn up on a daily basis over at CNN and elsewhere.

When the unthinkable does happen and the reporters and anchors have no clichés left to fall back on, their stunned and honest reactions anticipate those during the terrible tragedies of the Challenger explosion, Hurricane Katrina, the Asian tsunami, and especially 9/11. Eerily, in the background of RBS's New York news desk prominently stands the World Trade Center.

Technically the show is excellent; shot primarily on videotape, it recreates the look of network promos, news updates, remote feeds, etc. with great authenticity, and the use of extremely rough, raw handheld footage, overlapping dialogue, etc. adds to the realism.

Special Edition is part of the Warner Bros. Archive Collection of DVD-Rs that are pressed-on-demand. Because this was shot mainly on 1983-era videotape, viewers shouldn't expect something razor-sharp, but it looks perfectly fine for what it is. The Dolby Digital mono (English only, with no subtitle options) is adequate. There are no Extra Features.

I saw Special Edition when it premiered in 1983 and again a year or two later on pay cable television, but not since. I was surprised at how vividly I had remembered almost every scene, and that despite its familiarity and its dated aspects, how utterly engrossing and disturbing it remains all these years later. A must-see and a DVD Talk Collector Series title.