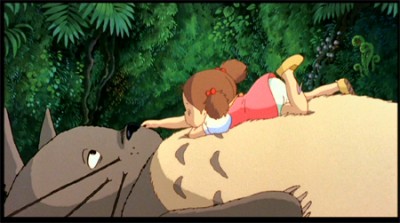 Few names in anime are as prolific around the globe as Hayao Miyazaki and the production studio he co-founded, Studio Ghibli. After all their efforts are regarded as the best of the best, and have the most mainstream appeal here in America. Universally there's just a certain level of quality one can expect from a Ghibli film. From the story to animation, voice acting, and music, there's just such a fantastical atmosphere to each that they stand out like no other. There's a sense of magic and wonder to each release that truly speaks to the hearts of viewers young and old alike. Whether you're looking at one of their most recent efforts, or one of their oldest, there truly isn't a bad piece in Studio Ghibli's library.

Over the years Disney has released Ghibli's films in one form or another. While the only one to set foot on Blu-ray to date has been Ponyo, the rest have received 2-disc Special Editions. Today we're going to look at My Neighbor Totoro, which arguably stands out as one of Ghibli's most iconic.

My Neighbor Totoro (Tonari no Totoro) was originally released in Japan in 1988. The film wasn't necessarily a breakout success, but over time it developed in stature and gained acceptance. It wasn't until years later that a dub was created, and even more time until Disney got their hands on the film and redid the dub with an all-star cast. They also released it for the first time with the original Japanese language and dub available on one disc. This 2-disc release offers the same in terms of quality, but we'll get into that in a moment. First let's talk about the film. 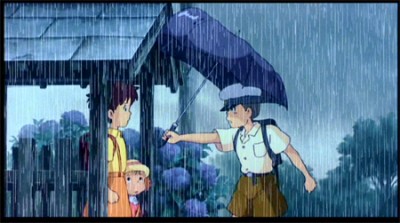 When My Neighbor Totoro opens up we're introduced to Satsuki and Mei Kusakabe, who have moved to a rural town with their father Tatsuo. Tatsuo's wife, Yasuko, is staying at a nearby hospital with a long-term illness and the family uprooted themselves to be closer to each other. Under these circumstances you'd think the move would be hard for the girls, but it's not really. The house they have moved into appears to be haunted by soot sprites (dust bunnies) and soon enough acorns litter the way to a much larger adventure.

Mei sees two furry little creatures scampering around and she follows them to a den in the nearby forest. There she meets a bigger creature named Totoro who is mysterious as he is cute and kind. Naturally Satsuki doesn't believe Mei's story until she sees Totoro with her own eyes soon after. Unwittingly they make friends with the creature and it's a magical friendship that takes them high into the air, on ride on a cat bus, and places they never thought possible. 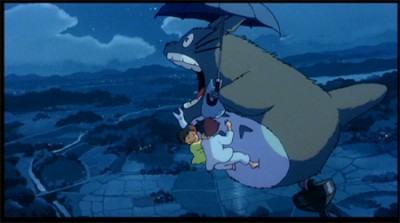 While My Neighbor Totoro is a fascinating and captivating film in its entirety, I dare say that the plot is very thin and not complex in the least. It follows a simple structure and is more effective than it is flashy. The pacing is slower than one might expect and from top to bottom the film is very subtle. This isn't necessarily a bad thing, mind you. It just really sets this film apart from others in the sense that it's unique and does its own thing without being too predictable.

Where the film's real heart lies is within its characters. Watching the downturn of events involving Satsuki and Mei's mother is heart wrenching, especially when viewed from their perspective. There's just an innocent nature to their reactions, though Satsuki's at the age where she understands the gravity of what her family is going through. Despite the darker tones in the plot, the film is never weighed down by them. Totoro acts as a ray of hope for Satsuki and Mei, and it's a role he fulfills wonderfully.

In many ways My Neighbor Totoro is a film about coping with loss and of growing up. It's a piece about the mysteries of childhood and a movie that will appeal to viewers young and old alike. As I stated, the plot isn't exactly the most involved thing about Totoro. The atmosphere, characters, and message ring through much louder than the core tale. It's a fairytale unlike any other and it's timeless in many regards. If you have never seen My Neighbor Totoro before, then you've been missing out on an amazing film. 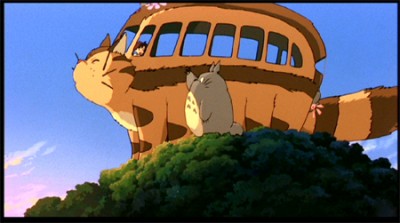 My Neighbor Totoro is presented on DVD with a 1.85:1 aspect ratio and has been enhanced for anamorphic widescreen playback. The transfer for this release is identical in every way to the one from a few years back. It's a shame that Disney didn't go the extra mile to clean up the image, but quite honestly the movie looks perfectly fine just the way it is. The picture is wonderfully vibrant with sharp lines, colors that pop in every frame, and clean animation all around. Some grain does find its way into the image and the picture flickers from time to time, but through and through this is a solid presentation for the film.

For audio My Neighbor Totoro's latest release once again borrows from the previous one. The film is presented with English and Japanese (as well as French) Dolby Digital 2.0 tracks. First off, the dubbing quality is fantastic no matter which track you listen to. Personally I preferred the original Japanese language, but the English track with names like Tim Daly, Dakota Fanning, and Lea Salonga is quite impressive as well. On the technical side of things the presentation of My Neighbor Totoro is a little lackluster. The sound is crisp, clean, and fine otherwise, but the limitations of the 2.0 space on the soundstage removes one from the experience a bit. With that being said the soundtrack comes to life and all the little sounds and noises of the film ring through loud and clear. A 5.1 track would definitely have gone the extra mile, but what's here is certainly fine enough. English and French subtitles are included. 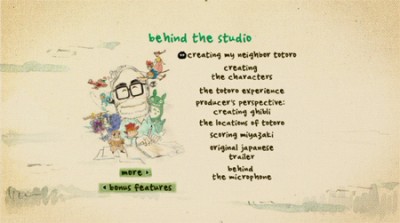 For bonus features here some were available on the previous edition of the film, and some of the content is new. Some trailers are present on the first disc with the rest of the supplemental material presented on the second disc. Those with the previous release may recall the "Storyboard Presentation of the Movie", which is the movie essentially in its entirety as told through storyboard images. The new material for this release is broken up into a section called "The World of Ghibli"

There are two sides to "The World of Ghibli". The first is "Behind the Studio", which is broken up into eleven different selections. "Creating My Neighbor Totoro" (2:59) features Miyazaki in his home talking about working on the film, how it came about, and some of his impressions of the project. "Creating the Characters" (4:24) is a similar feature, but this time Producer Toshio Suzuki and Miyazaki are present for interviews. "The Totoro Experience" (2:03) once again features Suzuki and Miyazaki, and this one is more relative to the reception of the film itself. The two once again make an appearance in "Producer's Perspective: Creating Ghibli" (1:19) where they talk about the foundation of their company. 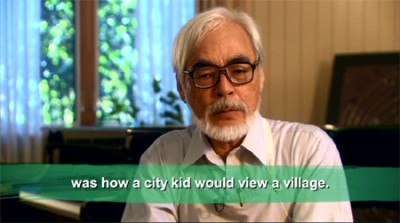 "The Locations of Totoro" (28:35) is the most robust feature here. It has been pulled from a documentary called "The Scenery of Ghibli" and more or less is a travelog with actress Mayu Tsuruta. In this feature Mayu shows us the many locations near Kanto that inspired, and were inspired by, the film. "Scoring Miyazaki" (7:19) has Joe Hisaishi talking about the music found in Miyazaki's films (Totoro and otherwise). If you've ever loved the music in these efforts then you'll appreciate this feature. Included here are also a two-minute original trailer for the film and "Behind the Microphone" (5:38), which features the American cast talking about working on the film. Closing out "Behind the Studio" are features for other Ghibli releases: "Creating Ponyo" (3:57), "Creating Kiki's Delivery Service (2:27), and "Castle in the Sky: Character Sketches" (2:40). Neither of these are extremely in depth looks, but are more than enough to make you want to watch those films.

The final feature on the second disc is "Enter the Lands". This inclusion is an interactive map that provides trailers, information, and artwork for Ponyo, My Neighbor Totoro, Castle in the Sky, and Kiki's Delivery Service. Each map has a good amount of areas to explore and kids will undoubtedly love digging through seeing what's available. There's nothing substantial, mind you, but it's fun to take for a spin. 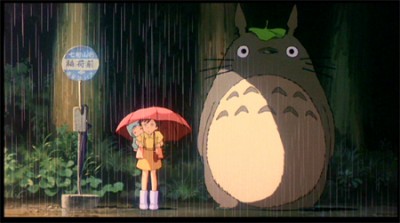 My Neighbor Totoro is a classic film from the creative talented mind of Hayao Miyazaki. Sure it may be a simple tale, but the best often are. Totoro evokes emotion within you, it's a blast to watch, and the characters, atmosphere, and music stick with you long after the credits roll. In that sense it's a masterpiece. This Special Edition DVD release does justice to the picture as well. The video and audio is quite good, though the lack of improvements over the prior edition is a bit of a letdown (in fact it's the only reason I'm not giving the Collector's Series rating). Where this release shines, however, is with its bonus features. There's a lot going on with the second disc and Ghibli fans will get a kick digging through the content. Consider this release highly recommended in every possible way.