Shout Factory // R // June 22, 2010
List Price: $26.97 [Buy now and save at Amazon]
Review by Stuart Galbraith IV | posted June 27, 2010 | E-mail the Author
Arguably producer Roger Corman's best-known film made during his New World period (1970-83), Death Race 2000 (1976) nostalgically encapsulates the bygone days of the drive-in movie with its lurid blend of sex and violent action, and though it doesn't quite live up to its cult classic reputation that's okay - it's still a lot of fun anyway.

It's also nice to see the film presented in a form frankly much superior to how titles like this looked back then, at decaying downtown grindhouses or at equally rundown drive-in theaters way out in the sticks. The transfer looks very good and the disc is loaded for bear with fun and informative extra features. 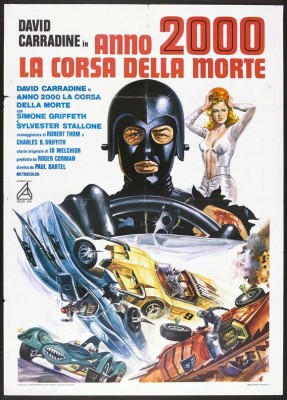 Notably short (79 1/2 minutes), Death Race 2000 is a darkly humorous sci-fi thriller-satire set in a dystopian future, one that in some ways is more eerily accurate than George Orwell's 1984. Following a military coup and global financial collapse blamed on the French (how prescient is that?), an international bipartisan government has placated its citizenry with an annual transcontinental road race. This being a low-budget ($300,000) movie, the big race is limited to just five contestants and their navigators: Calamity Jane's (Mary Woronov) vehicle resembles a bull; Nero's (Martin Kove) a lion; Nazi-influenced Matilda the Hun (Roberta Collins; she rides with Herman the German, amusing played by Fred Grandy) a V-1 rocket; and Machine Gun Joe Viterbo (Sylvester Stallone), who looks like Al Capone, and drives a sedan-like vehicle with knives and machine guns mounted on its hood.

But by far the most popular driver is the mysterious Frankenstein (David Carradine, in his first role after walking off the set of Kung Fu), covered from head-to-toe in black leather and a mask, supposedly to hide the myriad scars, burns, and stitches from his many spectacular crashes. As Frankenstein's navigators have the same mortality rate as Dirty Harry Callahan's partners, Annie Smith (Simone Griffeth), actually the granddaughter of Thomasina Paine (Harriet Medin), leader of the resistance movement, rides shotgun.

For a low-budget movie, there's some pretty satisfactory editing in the opening scenes among the principal actors and their cars, footage from a real racing event at the Ontario (California) Motor Speedway, and a modestly effective if incredibly garish and phony-looking matte painting of a futuristic New York City.

About 15 minutes into the race, its primary appeal is shockingly revealed: drivers are awarded points for hitting and killing innocent pedestrians, with senior citizens worth the most. (However, just how this relates to a final score and a winning driver isn't explained, making the race and its rules needlessly confusing.) As the cars begin mowing down unfortunate victims the resistance's plan becomes clear: they hope to assassinate Frankenstein and replace him with one of their agents so that the agent can in turn assassinate the President (Sandy McCallum), introduced in a weird homage to A Matter of Life and Death. Although the attempt to kill Frankenstein fails, Annie discovers that her reticent partner might just be sympathetic to the cause.

Based on a story by Ib Melchior (Robinson Crusoe on Mars, Planet of the Vampires), Death Race 2000's screenplay was written by longtime Corman collaborator Charles Griffith (The Little Shop of Horrors, Attack of the Crab Monsters) and Robert Thorn (TV's The Defenders, Corman's Bloody Mama), who along with director Paul Bartel (Eating Raoul) infused the picture with almost endless satire, which wasn't quite what Corman had in mind.

When it was new, the basic concept of scoring points by deliberately hitting innocent bystanders, coupled with brief but gory flashes of this mayhem, was extremely shocking, generating a mixture of nervous laughter and amused approval from audiences. Ironically, all the violence in this R-rated film could today almost be shown on free commercial television completely intact, while its extensive and superfluous nudity would undoubtedly have to be cut. (At least in the United States. In Britain the opposite might still hold true.) In any case, the violence that so shocked critics like Roger Ebert that he rated the film "Zero Stars" doesn't compare with the depressing, everyday degree of graphic violence casually and almost unavoidably presented in all media nowadays.

As a movie, Death Race 2000 is just so-so. The tone of the film isn't consistent and the pacing is awkward. For instance, while some of the humor bitingly observes Americans' increasingly delusional obsession with celebrity culture (one of Frankenstein's fans lets herself be struck and killed as an expression of her devotion), other scenes more closely resemble a Warner Bros. cartoon: revolutionaries paint an enormous flat to resemble a tunnel opening, like something out of a Wile E. Coyote/Road Runner short.

It wants to be a sci-fi action-thriller and a satire but doesn't entirely commit to either concept. There are flashes of excitement and suspense and amusing concepts but overall the film is neither particularly exciting nor particularly funny, despite good ideas interspersed throughout. Other story/character elements, such as Machine Gun Joe's largely unmotivated hostility toward Frankenstein, lead nowhere, though both Carradine and Stallone deliver enjoyable performances. And certainly Death Race scores a bull's-eye in drive-in exploitation terms. It's an entertaining film of its kind and of its time, admirable in trying to rise above expectations for the usual drive-in movie. (And it's certainly better than the numerous imitators that followed, at least up to Mad Max 2, which shifted this sub-genre in an entirely new direction.)

Filmed for 1.85:1 exhibition, Death Race 2000 is presented in its original widescreen, transferred from an inter-positive (IP). First released to DVD by Corman's own New Concorde during the format's earliest days, February 1999, that release was full-frame and included a few extra features, while a 2005 Special Edition added a few more and a widescreen remastering. Curiously, it appears some distributors mistakenly believed the film had fallen into public domain, so there are several unauthorized versions out on DVD as well.

This Blu-ray edition is vastly superior to all of those, with a clean, sharp, and bright image throughout; only a few grainy opticals suggest an older film. The 2.0 mono English-only audio is adequate. There are no subtitle options.

There's a lot in the way of supplementary material, some dating back to the 1999 and 2005 special edition DVDs, with a lot of new stuff courtesy Shout! Factory and producer Cliff MacMillan. From the 1999 DVD there's an interview with Roger Corman conducted by Leonard Maltin; from the 2005 release are: an audio commentary by Corman and Mary Woronov; "Playing the Game: Looking Back at Death Race 2000," a featurette with Corman, Woronov, Martin Kove, and Charles Griffith; and a theatrical trailer.

New to home video is David on Death Race, an interview with the late David Carradine; a new audio commentary with assistant director Lewis Teague and editor Tina Hirsh. Costume designer Jane Ruhm, writer Ib Mechior, and composer Paul Chihara each get their own profile featurette, Ready to Wear, Start Your Engines, and Killer Score, respectively, while members of the crew are interviewed about the production design and the modified racecars for Designing Dystopia. Culled from Trailers from Hell, director John Landis introduces the Death Race trailer, cut by future director Joe Dante. TV and radio spots are also included.

Finally, the Blu-ray sleeve can be flipped for alternate artwork (apparently from the Japanese release, as the kanji character "nen," "year," remains) while a 12-page booklet features more info about the film by an uncredited scribe.

Though not quite a homerun, Death Race 2000 is '70s drive-in exploitation at its near-finest, and Shout! Factory's release crams a lot of new and older extras onto a disc that, most important of all, is headlined by an excellent transfer. Highly Recommended.