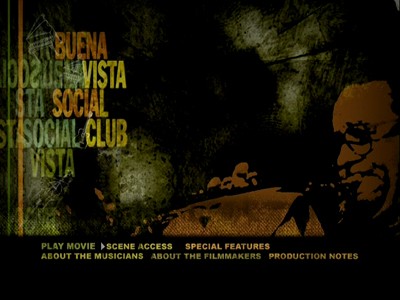 Buena Vista Social Club was quite the phenomenon back in the late 1990s. It started as a Grammy Award-winning album put together by Ry Cooder, and then it was followed by an Oscar-nominated documentary by German director Wim Wenders. The endeavor began with Cooder traveling to Cuba in search of the origins of some music he had heard on a tape some time prior. In trying to bring together different people, he discovered a large group of nearly forgotten musicians and singers, all of them well into old age, who represented the country's lost musical past. The film was made to spotlight the personalities behind the music, as well as to document a gathering of the participating musicians for a concert at Carnegie Hall. The resulting public embracing of this particular type of music is something I think only comparable to the similar celebration of T-Bone Burnett's archival soundtrack for O Brother, Where Art Thou?.

Wenders, shooting on video, put together Buena Vista Social Club using interlocking footage from a variety of parallel tracks. He followed Cooder around Cuba, peeking into the recording studio and breaking off to interview some of the musicians. He tours their neighborhoods, capturing on-the-street glimpses of modern Cuban life, laying the artists' stories on top of the images. Each of the interviewees talks about how they got into music, establishing a common history: just about every one of them picked up an instrument as youngsters, usually as part of some family tradition. This led them to embrace well-known songs, as well as collaborative efforts to create new ones. Wenders cuts together impromptu performances and a cappella versions with bits from the studio and full-band efforts on stage. Most of the performers also talk about their instruments and how some of them are specific to Cuba. 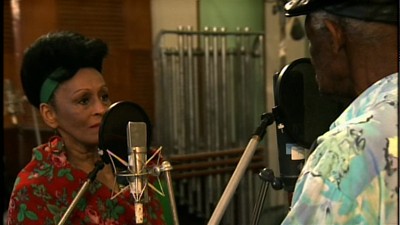 For me, hearing the old stories is more fascinating than the music itself. I liked the songs, but actually wish they had either been put more front and center or they were more constant. Songs softly mixed in with the interviews would have created a real rhythm for the entire movie. That's a small complaint, though. There are some great tales about the fighting techniques of blind piano players, busking on the street, or the men bragging about their virility and the number of children they have (at 90, Compay Segundo has five kids and claims to be working on his sixth). One of my favorite sequences was seeing Rubén González play piano for a bunch of young ballerinas. The joy of music really came clear watching the little girls break form and just move according to how the sounds made them feel. It's also neat seeing these old guys go to New York for the first time. They have a sense of wonder that is rare these days.

Sadly, many of the musicians in this film have died in the decade since Buena Vista Social Club was released. Segundo, González, Pio Leyva, Manuel "Puntillita" Licea, Anga Diaz, Orlando "Cachaito" López, and Ibrahim Ferrer have all passed on. Buena Vista Social Club was the right document at the right time, a chance for these talented individuals to take one more shot at sharing their gift with others. The movie could take on a melancholy air as a result of this. There is even one shot where González is looking for the Statue of Liberty, and he nonchalantly points past the World Trade Center. So much has changed since that night at Carnegie Hall, it would be easy to get wistful. Yet, the fire of the music remains, and as Ibrahim's final song in the movie suggests, it can't be extinguished. 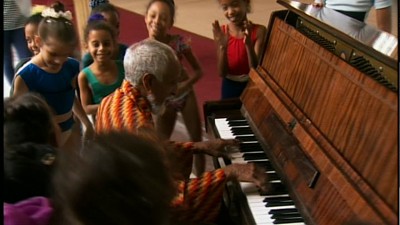 Video:
Buena Vista Social Club has been on DVD before, having been released by Artisan in 2000. From reading our old review of that disc, I am hard-pressed to distinguish what is different about this one, which has been reissued as part of the first wave of Lionsgate's "Music Makers" series. The anamorphic transfer of the movie looks like something we would have seen ten years ago. It's okay, plagued by some interlacing, but of a decent enough quality to get by. The packaging bills it as having a "Full Screen 1.33:1 DVD Screen Format" transfer, though as the screencaps show, the actual specs appear to be more in line with the original 1.78 aspect ratio.

Sound:
A 5.1 mix is mostly really good, giving a strong focus to the music so that it can be played loud and is reflective of the live sound. There are some occasional metallic tones, mostly when the audience applauds in some of the concert scenes, but these aren't harmful to the overall enjoyment.

There are English subtitles that play automatically and are burned into the picture. They cannot be removed. There is also Closed Captioning.

Extras:
There is a bonus second disc in all of the Music Makers releases, an audio CD with five songs from the movies in the first wave: "Mack the Knife" by Bobby Darin, "I Got a Woman" by Ray Charles (from Ballad in Blue), "I Want to Be Wanted" by Sammy Davis, Jr., "Veinte Anos" by Omara Portuondo, and Darin's "Beyond the Sea." This disc is the same in all of the discs released so far. 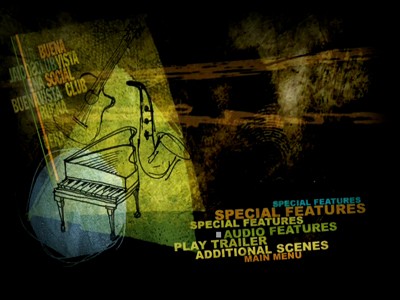 The extras on the DVD are a mirror of what was released in 2000: a full-length audio commentary by Wim Wenders, the film's theatrical trailer, and four deleted scenes that showcase more songs and interviews. There are also text bios of the musicians, the filmmakers, and notes on the production of the movie; these may be new, or the previous reviewer did not mention them.

FINAL THOUGHTS:
Recommended. Given that this is largely a recycled disc, I've decided to rank it in the middle, saving the "Highly Recommended" for a future date when maybe we'll get a package that is more updated to meet current technological standards. Because Lord knows, the content deserves it. Buena Vista Social Club is a wonderful film capturing a group of previously unheralded Cuban musicians, telling their story and sharing their music. Jazzy with a Latin flavor, the tunes here are exquisite, but the background ends up being what really stands out. It's a movie by people that love music about people that love music, and it should appeal to anyone that shares that love. 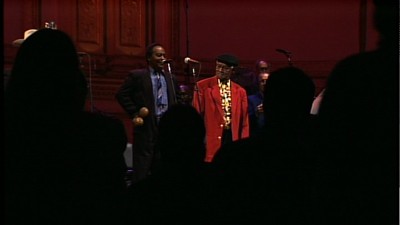