Living for the Day After Tomorrow: Complete Collection

Living For the Day After Tomorrow is a touching, methodical stroll through a summer where little girl's wish to become an adult is granted. The series is based on the manga written and drawn by J-ta Yamada and spans 12 episodes across two DVD's. Joining the glut of movies and shows that deal with age swapping, Living For the Day After Tomorrow doesn't cover much new ground. But that certainly doesn't make it unwatchable. In fact, I enjoyed this little drama series quite a bit and grew to really like most of the characters as the story progressed.

After losing his parents, Hiro is forced to leave his life in America to care for and raise his younger sister Karada Igokawa. Young Karada feels as if she's a burden to her older brother. Karada makes a secret wish at the town shrine; she wishes to become an adult to free Hiro of his burden. Karada has no idea what chaos will ensue when she makes her wish. Shoko, an old friend of Hiro's, happens to be with Karada at the shrine when she makes her wish, which has the side effect of turning Shoko into a little girl. Once the wish is granted, the wishing stones in the altar are turned to charcoal preventing them from simply unwishing the wish. 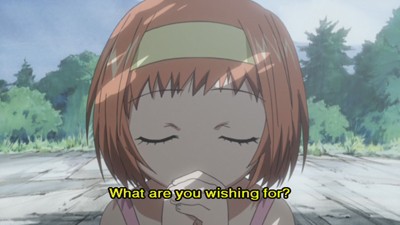 I assumed that Living For the Day After Tomorrow would merely swap the personalities of the Karada and Shoko, but instead it uses the Big template for granting age wishes and takes it a little further; Karada physically becomes a woman in her 20's while Shoko becomes 12 years old again.

Will Karada be able to find her way as an adult? What about poor Shoko? Shoko is quite possibly the unhappiest female in anime. The only thing she seems to hate worse than her life is her childhood; now she is forced to relive it. How will Hiro handle the fact that his little sister is now his own age and his friend Shoko is a little girl? What about Amino and Kotomi? Just how do they fit into this whole sordid affair? 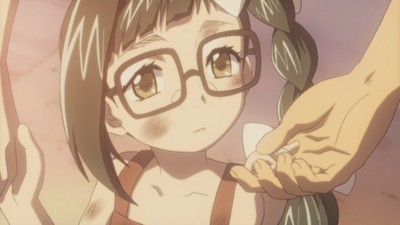 The story moves along slowly, taking its time to reach various revelations and the climax. On the surface, there really isn't a whole lot of ground to cover. The two girls involved in the wish just have to reveal what happened and deal with the repercussions. The rest of the story just deals with how they live their summer with this curveball. Even with that, Living For The Day After Tomorrow never becomes dull. The characters are interesting and you always feel that the story, while moving along slowly, is still moving--and in a solid direction.

I was impressed with the amount of restraint exercised by the writers of this series. When I read the description, I feared this could either lapse into a lame slapstick comedy or, conversely, it could take a turn for the worse and become really bizarre and perverted. Let's face it, anime has no qualms about delving into either territory. Both Karada and Shoko have either existing romances or budding relationships that lead to instances where adults could end up with children as potential lovers. Thankfully, the show never goes there with some of the situations the characters are put into. The relationships aren't really even developed until the latter episodes. While the situations are still kind of weird, it's handled tastefully. There is little, if any, fan service in this series and that's definitely for the best. Some handholding is the extent of any affection displayed. 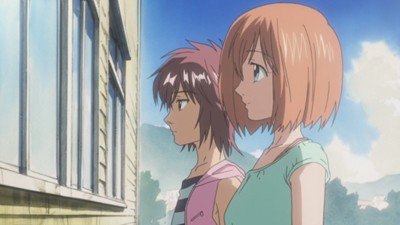 My main complaint with this series is that some of the characters definitely don't look the age they claim to be. Child Karada in particular appears quite a bit younger than 12 years old and it's a major distraction. There is no good explanation for why she appears so young. She's not naturally short--she must hit a great growth spurt at some point in her teens because Adult Karada appears normal height with fantastic proportions. It's as if the artists wanted the difference in the age switch to be, visually, as dramatic as possible. This is one area where they went too far--the visual age difference between a 12 year old and someone in their 20's is still extreme even without exaggerating it. I didn't see any need to have a 12 year old girl physically appear to be six. I also assume that Child Shoko is 12 years old as well because she and Karada seem to switch ages. Shoko must've inherited Karada's unfortunate trait of late blooming. She looks much younger than 12 years old as well.

With the slow and deliberate build-up throughout the story, the climax was abrupt. However, the finale is nicely wrapped up. Overall, this is a very solid story that holds its own amongst other anime dramas.

Audio: The audio is in 2.0 stereo and sounds good for what it is. There is not much action in the story so your speakers will not be given any kind of workout. Only an English subtitled, Japanese language track is included on this release.

Video: Visually this disc is stunning. The art is not over top or overly detailed. It features eye-catching, watercolored, storybook-like backgrounds as well as excellent, understated character designs that supplement the light fantasy theme perfectly. Yes, there are a couple of characters with the typical anime pink hair and purple eyes, but with the soft coloring they somehow they fit in with the rest of the cast. The video is presented in anamorphic widescreen 1.78:1 ratio and looks sharp.

Extras: Outside of clean opening and closing videos, there is nothing to see here. Move along.

Final Thoughts: Living For the Day After Tomorrow is a very watchable little drama, but nothing that hasn't been done before. There's no need to fear some perverted twist with the age swapping; this anime is tasteful from beginning to end. The story, while not very deep or all that surprising, is still a joy to watch unfold for patient viewers. It's never dull, but if you aren't into slower paced anime, then you may not like this series. The rewatchability of this series is pretty low; there are no real extras and there's nothing plot-wise that demands repeated viewings. Living For the day After Tomorrow is a decent, simple and, at times, touching story for those willing to give it a fair shot. Recommended. 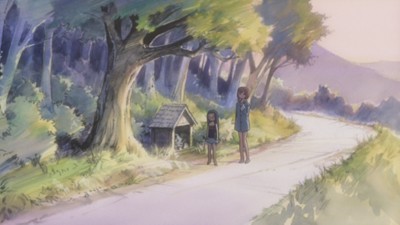