Vandread: The Complete Collection is a 4 disc DVD set jam-packed with 760 minutes
of sci-fi action/comedy goodness. Included in the DVD set are the two 13 episode seasons as
well as two 75 minute OVA's: Integral and Turbulence. Vandread features
a lot of mecha action. Personally, I'm not a huge fan of mecha; I enjoyed most of
Evangelion, but usually the genre does not do anything for me. Oddly
enough,
I enjoyed this particular series quite a bit. There's enough character development, plot, and
humor to make Vandread appealing to a wide portion of anime fans.

In the series, there has been a long standing war between the all-male planet of
Tarak and the all-female planet of Mejale. Hibiki is a lowly, 3rd class laborer
aboard a Tarak vessel who desires more from life. He is a spunky kid who never backs
down and is willing to defend himself against all odds. It is this pride that allows
Hibiki to be goaded into stealing a Vanguard--a Tarak fighter ship--and get arrested
for it in the process. Then, the Tarak battleship gets taken over by a group of
Mejale space pirates. Hibiki, along with two other males, Bart and Duero, are taken
prisoner by the women. The battleship's core, the Paksis, then mysteriously merges
the male battleship with the female's vessel to form the Nirvana, which is now lost
in an area of space that is swarming with mysterious enemy ships. 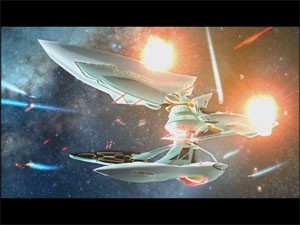 As the Nirvana makes its way back to the known galaxy, the male prisoners prove
themselves useful to the female space pirates. Hibiki can fly a specific Vanguard
that has the ability to merge with the female fighters, the Dreads, to form a Vandread.
Bart is the only one that can control the Nirvana--this is discovered after he is
sucked into the core. For some unknown reason, Bart's movements then match the movements
of the ship. Duero serves as the Nirvana's doctor. As the show progresses, the female
characters are introduced with Dita being the focal point. She rather enjoys being
merged with Hibiki, who she affectionately refers to as Mr. Alien, and becomes jealous
when other women such as Jura also want to merge their Dread with him. Most of the
episodes in the first season fall into a formulaic, monster-of-the-week theme that
is greatly expanded upon in the second season. The cast is huge, but each character
that is interesting is given enough screen time to develop and grow throughout the
26 episode set. 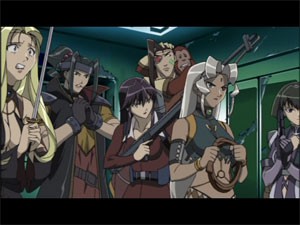 Vandread is a light, action-packed, comedic at times, space opera. The story sneaks
up on you. At first, the plot of men and women living on separate planets and being
mortal enemies seems bizarre, but intriguing. It's obvious however, that Vandread
does not take itself very seriously and revels in its lightheartedness. Near the
beginning of the second season, the monster of the week formula each episode followed
is explained with a great plotline that is expanded upon for through the rest of
the series. Many other questions are answered as well, such as how men and women
became separated in the first place. Vandread's answers to these questions are surprisingly
deep and create a tight story that wraps everything together nicely.

Much of the humor in Vandread centers around sex jokes and how the women space pirates
of Mejale and men of Tarak aboard their ship stumble around the new issue of sexual
attraction. The whole premise of the show revolves around the sexual symbolism of
the Vanguards, the men's fighter ships, and the Dreads, the women's fighter ships,
combining to become the ultra powerful Vandreads. Hibiki and Dita's combination
is especially suggestive because they end up, not only in the same cockpit, but
with Dita sitting in Hibiki's lap. Dita enjoys this fact more than she should if
she had no feelings towards Hibiki. Many of the other women are jealous of Hibiki
and Dita's combining and try to sway Hibiki to join with them instead during battles--a
theme which forms the basis of their rediscovery of male/female relationships. 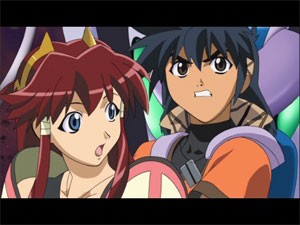 Hibiki's rude and sometimes hostile attitude towards the two women that have crushes
on him get tiresome. His outbursts come across as cruel and mean-spirited and make
him unlikeable at times. Dita may act like a child at times, but Hibiki does as
well. It's like watching two school children where the girl has a crush on the boy
and the boy, in turn, thinks she has cooties. This series assumes that men and women
do not know that they are supposed to be attracted to one another and be affectionate
with one another. Still, Hibiki's reactions to Dita, and later to Misty, are overly
harsh and he really fails to outgrow this childish trait throughout the series--he
could at least use more tact in dealing with the situation. 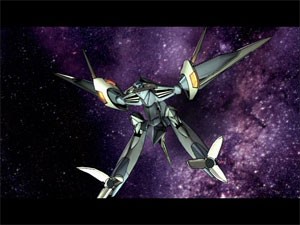 Vandread takes aim several times at Evangelion. The character of Meia is very Rei-like
in appearance and in her stand-offish personality. One episode is even devoted to
Hibiki's existential crisis as he attempts to overcome himself and discover just
who he is. This episode becomes a little avant garde and is an obvious tip of the
hat to Evangelion, except that Vandread actually answers questions, moves the story
forward, and finishes with a satisfying ending--all things that Evangelion failed
at miserably and has spent years trying to fix. 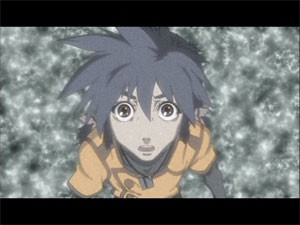 Sound: The two series feature English and Japanese 2.0 stereo tracks. The OVA's
are Japanese tracks with subtitles only. The sound quality is fine for both tracks--the
action sounds fine with some directionality along the fronts. This series, if produced
today instead of 10 years ago, would have sounded great in Dolby Digital surround
sound as most episodes feature a hefty dose of space battle. I listened to the English
dub throughout the series and the voice actors do a great job with the characters.

Video: The video is presented in non-anamorphic widescreen. The quality of the animation
is average other than the non-anamorphic transfer. There are some compression artifacts
present and some line noise in parts, but these are minor issues and never distracting.
The CGI in this series is the one disappointing area. It is very obvious CGI and
looks nothing like the animation. The first season's CGI looks especially terrible
with graphics that look like a Playstation 2 game. The second season's CGI is markedly
improved, featuring better camera angles and more detail, but it still contrasts
sharply from the animation. The art itself appears a little inconsistent. Upon viewing
the OVA's right after the second season, I initially thought they may have redone
the art for the OVA's, but going back and looking at the first few episodes, the
art style was a bit different in the earlier episodes.

Extras: No extras are included with this collection.

Final Thoughts: Vandread is an underrated and surprisingly good sci-fi anime series.
While it's still not quite Evangelion or other big-name mecha series, it ends well
and the story takes some surprising turns. Vandread never takes itself seriously;
there are an abundance jokes, comedy bits, and fan service with bouncy parts. The
two OVA's, unfortunately, are completely worthless additions. They are merely 75
minute summaries of the first two seasons of Vandread, but for completionists they
are there for you. If you enjoy series like Slayers that are light and fun, but
also feature a surprisingly good storyline, then you will enjoy Vandread. It's definitely
worth a look for anime fans who enjoy sci-fi or mecha. Recommended. 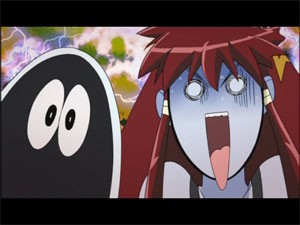