Image // Unrated // June 22, 2010
List Price: $39.95 [Buy now and save at Amazon]
Review by Stuart Galbraith IV | posted June 28, 2010 | E-mail the Author
Michelangelo Antonioni's first color film is of the sort that divides critics and audiences. Some will find it hypnotically beautiful, though maybe artfully grotesque is a better description. Others will find it dull and gratingly pretentious. But one thing's for sure: Criterion's Blu-ray edition of Red Desert (Deserto rosso, 1964) shows the film off to its best advantage, beautifully transferred in such a way that it captures the director's extremely delicate use of color and design that (along with star Monica Vitti's mesmerizing central performance) is its main achievement.

Digital technologies and more sensitive, pliable film stocks today allow filmmakers to manipulate their films' color pallets easily and in just about every way imaginable, but back in the early-1960s Antonioni and cinematographer Carlo di Palma achieved many similar (though much less obvious) effects. I'd imagine Red Desert must have driven various film laboratories nuts back in 1964/65 and on theatrical prints the color timing must have been all over the map, most of the time probably wildly off base from the director's original intentions. Criterion's Blu-ray version is a must in much the same way The Leopard and Days of Heaven are. The viewer simply doesn't have the tools to fully appreciate the film (or not) without the added clarity and more varied color that high-definition provides. Presentations like this one are really the best way to see films like this short of a carefully struck 35mm print perfectly projected.

Beyond its stellar transfer, Criterion's Blu-ray edition includes many fine extras including an audio commentary, archival interviews, and a booklet. 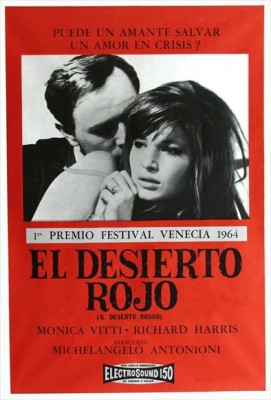 I have no idea what ElectroSound 150 was. Anyone reading this know?


Ugo (Carlo Chionetti) is the director of a sprawling nationalized industrial plant (making what is never identified) in the midst of a labor strike; the film opens with a lone scab entering the plant under heavy guard as union leaders taunt him with the aid of a megaphone. Thick, yellowy smoke chokes the sky while the ground is dead and oily with industrial waste. Through all the muck steps Giuliana (Vitti), Ugo's wife, and their young son.

Meanwhile, Ugo's friend and business colleague Zeller (Richard Harris, dubbed into Italian by someone else) arrives into town, hoping to hire idle workers for a long-term job in the South American jungle. Ugo introduces Zeller to his beautiful wife, later explaining she's been acting strangely since a minor traffic accident, though in reality Giuliana was hospitalized after attempting suicide, a fact she has kept from her husband.

What plot Red Desert has is almost entirely implicit and internalized. Mainly it's concerned with Giuliana's feelings of isolation and her gradual mental unraveling. Though comparatively well off (the family has a maid) she lives in an oppressively utilitarian house and feels increasingly removed from her family. And like Todd Haynes's Safe (1995), Giuliana becomes obsessed that omnipresent pollutants in the air are killing her. (Spoilers) A fascinating sequence has her son apparently waking up one morning paralyzed from the waist-down, which understandably greatly distresses her. How that's resolved is uniquely disquieting.

Giuliana thinks Zeller might be the answer to all her problems. He at least listens and seems to understand her concerns, though there's little evidence to suggest that's the case; he seems more interested in having a conventional love affair.

In the end, Red Desert is about Giuliana's lonely awareness that industrialization and convenience have come at the cost not only of our health but also our humanity, though like cockroaches the human race seems to be adapting well enough. The film's characters wander about Antonioni's desolate urban sprawl unconcerned ("The waste from these factories has to go somewhere," someone says).

There's one alarming image after another: a waterway and its shore glistening with slippery black oil (where have I seen that before?); an enormous rust-colored silo the size of King Kong towering over Zeller and Ugo; in the same sequence from around a corner a sudden, enormous burst of white billowing smoke engulfs them, recalling the collapse of the World Trade Center on 9/11. A huge smokestack seen at the beginning of the film that noisily shoots out yellow flames and, more disturbingly, one at the end spews poisonous yellow smoke. "If a little birdie were to fly through it would it die?" Giuliana's son asks. "By now they know to stay away," she replies, an answer not exactly comforting.

It's like the flipside of Play Time coupled with the industrial horrors of Quatermass II. Antonioni's and Di Palma's painterly design expresses this beautifully, horrifyingly in almost every shot. From the opening titles, deliberately out-of-focus views of smokestacks and the like are seen under the credits while Forbidden Planet-like electronic tonalities play on the soundtrack. For most of the film, color is restricted to light pastels, is desaturated, and in apparently subjective shots from Giuliana's perspective, sets, locations, and even props are painted white, black, or a kind of charcoal ash gray. In visual terms alone, Red Desert is strikingly original.

The transfer, presented in its original 1.85:1 theatrical aspect ratio (the Italians preferring that for their non-'scope productions), sources the original camera negative and looks it. Despite some flaws inherit in the original production (hair in the camera gate) and damage to the original Technicolor negative (a big green line appears for several seconds right down the center of the frame) the delicate color palette is just gorgeous, the high-def image is able to handle the film's many smoke/fog-shrouded scenes, and the image is bright and impressively sharp throughout. For a 1.85:1 release from the 1960s, this is one of the best I've seen on Blu-ray so far.

The mono soundtrack, culled from a (Westrex) monophonic 35mm optical track, is likewise fine and subtitles are easy to read. A "resume playback" option is a nice and much-needed option Criterion appears to have recently added to their discs. This one is Region "A" encoded.

Supplements, all in high-definition where applicable, include an audio commentary by Italian studies and film scholar David Forgacs, the same one featured on the BFI's Blu-ray/DVD release; dailies from the film's production (but not, alas, any film of a notorious fight between the director and actor Richard Harris, who either walked off or was fired); archival interviews with Antonioni and Vitti; and two short, early documentaries by the director. N.U. (1948) follows the work of urban street cleaners, while Gente del Po (1943) looks at a barge trip down the Po River. An odd trailer plays up the film's Golden Lion win at the Venice Film Festival but with its jazzy music suggests some kind of sex comedy.

Finally, an excellent 40-page booklet includes "In This World," an essay about the film by Mark Le Fanu; "The Night, the Eclipse, The Dawn: Godard Interviews Antonioni," conducted for a November 1964 issue of Cahiers du cinéma ; information about the transfer and descriptions of the short films. (Like Red Desert, the packaging design is pretty desaturated of color and deliberately utilitarian in design as well.)

Unconventional and challenging to the viewer because its drama is implicit and internalized while its chief attribute is the beauty of its images rather than rooted in story or characterization, Criterion's Blu-ray of Red Desert is one of the year's best releases, and a DVD Talk Collector Series Title.