Image // Unrated // June 29, 2010
List Price: $49.95 [Buy now and save at Amazon]
Review by Stuart Galbraith IV | posted June 18, 2010 | E-mail the Author
The greatness of Luchino Viconti's film of The Leopard (1963) isn't easily described. Even in its restored, three-hour and five-minute Italian version not very much happens: a 19th century Sicilian nobleman becomes involved in a nephew's marriage to the daughter of a newly-moneyed mayor. But most of the drama is internalized, as the nobleman tries to come to terms with his eroding power in the face of Italy's democratic unification. Though almost unbelievably opulent, there's no sweeping action in the usual Samuel Bronston roadshow sense.

Where the film comes alive is in its central performance by Burt Lancaster, which in this Criterion presentation is offered two different ways: with the actor's voice dubbed into Italian (with an aristocratic, Sicilian accent) and supported by English subtitles in its complete 185-minute version, and with Lancaster's own voice in the 161-minute English-language version. Frustratingly, neither is completely satisfying (more on this below), though his performance, said to be Lancaster's personal favorite, unexpectedly comes through (and is even better) in the Italian-dubbed version.

But the film's truly awesome achievement is its extraordinary recreations of aristocratic 19th century Sicily. The Leopard reportedly cost $3 million (20th Century-Fox co-financed its production) but it easily looks five times that. The extraordinary costuming, lighting, set design/decoration, and cinematography are like sprawling period canvases come to life. The film's influence on Stanley Kubrick (for his aborted Napoleon and later, Barry Lyndon) and Francis Ford Coppola (The Godfather, Part II, etc.) is obvious.

The Leopard was photographed in Technirama, with European release prints in Super Technirama 70. The large frame format was basically VistaVision with a slight, anamorphic squeeze: 35mm film ran through the cameras horizontally, exposing a frame twice the size of CinemaScope (eight perforations "wide" vs. four perforations "tall"), resulting in a vastly sharper image than conventional 35mm 'scope, and instead approximating the extreme clarity of 70mm formats like Todd-AO.

Criterion's outstanding transfer of the 185-minute version was derived from the original Technirama, horizontal negative. The image is incredibly vivid throughout. As with several other Criterion titles, such as Play Time, Days of Heaven, and The Red Shoes, The Leopard is a must in high-definition for its huge boost in clarity, which in turns adds detail and dimension to its aggressively baroque look. 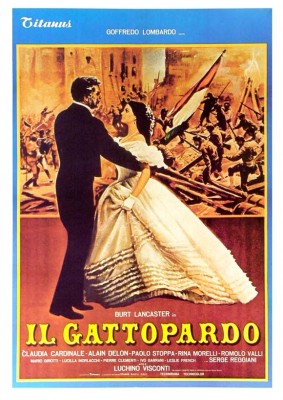 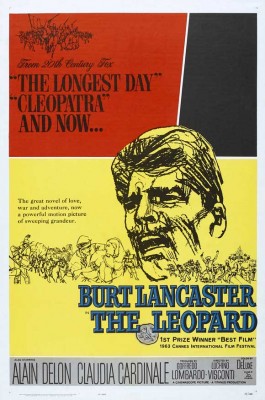 The Leopard (Il gattopardo, or "The Serval") was based on a posthumously published 1958 novel by Giuseppe Tomasi di Lampedusa, himself the last of a line of Sicilian princes, whose estate was decimated by the Allies during World War II. The cathartic novel, with a main character suggested by the prince's own great-grandfather, is the story of Don Fabrizio Corbera (Lancaster), Prince of Salina.

The slight plot illustrates the Prince's enormous, patriarchal influence over the region, including his large family and enormous estate. He takes a paternal interest in his nephew, Tancredi Falconieri (Alain Delon), whose own father squandered his part of the family fortune. Believing Tancredi holds the key to his great family's future, he helps engineers his marriage to social climber Angelica (Claudia Cardinale), daughter of the Mayor of Donnafugata, Don Calogero Serdàra (Paolo Stoppa). (The Prince has stubbornly packed and moved his entire family to Donnafugata for the season, this despite the threat by revolutionaries.)

Don Calogero, it seems, has himself become extraordinarily wealthy after giving his allegiance to Garibaldi during his conquest of Sicily. Though now nearly as rich and influential as the Prince, he completely lacks the latter's breeding. The Prince finds Don Calogero's lack of aristocratic refinement amusing, embarrassing, and depressing, but says nothing. However, he finds some comfort in his future daughter-in-law's natural beauty and vivaciousness (in contrast to his own daughters and nieces, whom he likens to wild monkeys), and briefly recaptures his youth while waltzing with Angelica at her coming-out ball.

To Burt Lancaster's disappointment, Visconti's film was heavily cut for its U.S. release and, perhaps more importantly, presented only in 35mm CinemaScope rather than as a 70mm roadshow. Though closer to the director's vision, it's hard to watch Lancaster in the Italian version and not imagine how much better it would be (for native English speakers, anyway) to hear his uniquely clipped, velvety voice rather than the uncredited Italian dubbing him.

Of course, French actor Alain Delon is also dubbed, and for that matter so too is Claudia Cardinale (most of the time), by actress Solveyg D'Assunta, but a disconnect with Lancaster is almost unavoidable. Dubbing of non-native actors in European films generally doesn't bother viewers; for instance, nobody complains Frenchmen Philippe Noiret and Jacques Perrin were dubbed into Italian for Cinema Paradiso. But, for whatever reason, Lancaster's dubbing remained a distraction.

On the other hand, so much of his performance relies on his silent but expressive reactions to the changing world around him, particularly during The Leopard's hypnotic final hour, which consists largely of The Prince wandering from room-to-room during an extravagant night-long ball. Visconti resisted Lancaster's casting by the producers, but watching his flawless performance, reportedly based on Visconti's own intimidating, aristocratic bearing, it's no wonder they eventually became intimate friends.

The excellent screenplay shrewdly distills the essence of the novel by adapting one large swath of it rather than tackling the entire narrative, intelligently hinting at the fate of its characters without feeling the need to dramatize absolutely everything.

Though apparently even Italian audiences were largely unfamiliar with much of the film's historical figures and incidents, I still wish I had a better grasp of that period of Italian history going into the film, though ultimately it doesn't really matter, any more than a knowledge of early-20th century American history is required to appreciate The Magnificent Ambersons, which in many ways this resembles.

(For comments about the Technirama process, see above.) The 2.21:1 presentation opens with one of the ugliest-looking 20th Century-Fox logos of all-time, which thankfully immediately gives way to a stupendous presentation, one of the best the format has seen so far. The transfer pretty much looks perfect throughout; I noticed no damage or age-related wear, no horizontal negative scratches, just a stupendous sharpness and a superbly subtle color pallet. The white-on-frame subtitles are clear and easy-to-read, though I was disappointed that some Latin and French dialog went untranslated and, unlike other companies such as AnimEigo, Criterion did not bother to translate the full credits, reproducing only an abbreviated list in the accompanying booklet. Though it may have had one originally, this release includes no overture, intermission break, or exit music. Both discs include a feature I've not noticed before, an option to resume playback even after stopping the disc.

The mono soundtrack - 70mm monophonic presentations were not unusual in Europe of during the 1960s - is derived from a 35mm optical soundtrack master and has been cleaned up noticeably while avoiding the temptation of creating a faux stereo version.

The American version, presented in 2.35:1 high-definition on Disc 2, is transferred from a four-perforation, 35mm inter-positive. It's more than a bit scuffed up, with lots of dirt, minor scratches, etc., as if to contrast the perfection of the Italian version, but looks good for what it is. They make an interesting, stark contrast for demonstration purposes.

Supplements are pretty much identical to Criterion's June 2004 DVD release, with some material bumped up to high-definition. "A Dying Breed: The Making of 'The Leopard'" is an original Criterion documentary running just over an hour and is essential viewing. With the major exception of Alain Delon, surviving members of the cast and crew are interviewed, including Claudia Cardinale (whose extravagantly overdone black eye makeup suggests a BP spill), co-screenwriter Suso Cecchi D'Amico, and the late Sydney Pollack, who as it turns out supervised the dubbing of the American version, which he admits was pretty terrible.

As Visconti admirer Sydney Pollack states in the documentary, this unusual and ornate epic "goes on and on," and its implicitly expressed themes not easily discerned on a first-time viewing. But the picture's dazzling, baroque design, which jumps off the screen in high-definition, and Visconti's exploration of a minor prince's decline and the subtle decadence of both the privileged class and the nouveau riche is exquisitely expressed. A DVD Talk Collector Series Title.