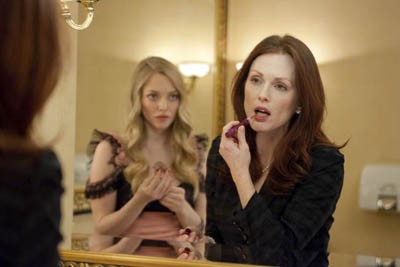 The tagline on the poster for Chloe should read: "Well, it's not like anyone's paying her for her personality."

The her I refer to is she of the title, the hooker Chloe as played by the porcelain doll Amanda Seyfried (Mamma Mia, HBO's Big Love). Chloe is the object at the center of Atom Egoyan's current stab at ice-cold erotica. The Sweet Hereafter-director is remaking a French film called Nathalie, directed by Anne Fontaine. I haven't seen that film, but by changing the title, I can only guess that Egoyan did Fontaine a kindness.

Chloe is a young prostitute who works fancy hotels, where she bilks lonely businessmen and cries in the bathroom stalls. That's when she meets gynecologist Catherine Stewart (Julianne Moore), who has come to the same lounge with her husband David (Liam Neeson) and their horndog friends. David is a college professor specializing in languages, and Catherine suspects him of cheating. He's a flirt, she says; he's just friendly, he cries! Hoping to prove what she thinks she already knows, Catherine hires Chloe to come on to David to see what happens. For her money, Catherine presumably buys David a good time and buys herself some satisfaction--and not just in the way you might think. Chloe perceptively realizes what only Catherine's showerhead otherwise knows: that her dirty tales of dirty deeds with hubby is getting wifey all hot and bothered.

Ironic, no? A gynecologist spends her days performing maintenance on other lady parts, but she has no idea how to take care of her own. Likewise, David is a master of foreign tongues. Such is the obviousness of Chloe's symbolism. It's an erotically charged film, and lest we forget that it's all about sex sex sex, Egoyan makes sure to remind us. Every few frames someone is getting groped or making a lewd comment. Even the Stewarts's son (Max Thieriot) is having his own sexual mini-drama. If this movie were a dog, it would likely mount and hump our legs. 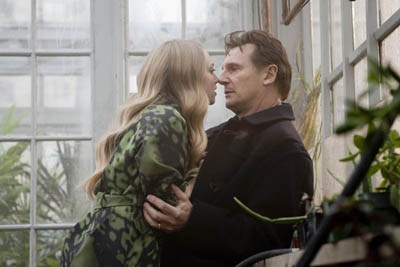 And that's fine for as far as it goes. Some of Chloe is actually pretty steamy. Amanda Seyfried is undeniably beautiful and very sexy. Chloe is her bid at an acting rite of passage, letting a creepy old director ogle her in hopes that it will make us forget she normally plays the sweetheart. It doesn't work for her. I don't think that her performance is bad, I think the fault lies with the script. Neither Egoyan nor screenwriter Erin Cressida Wilson, who earned her kinky cred properly when she wrote Secretary, give the young actress a proper map to find her character. Chloe is merely there for the director's exploitation, a puppet he can dress and undress at will. Chloe smiles, then she cries, and then she seduces, but it's all hollow. At the start of the picture, she tells us how her job is about being in control, about knowing the right thing to do to get the proper response out of her client, but I feel like Seyfried wasn't really describing her own role. It's more like the actress was reading the director's statement on his behalf. He'd so love to manipulate us toward his way of thinking. Too bad he pulls out before he gets the job done.

The first half of Chloe is spent building a dramatic and emotional house of cards that the filmmakers promptly sweep off the table. Rather than deal with the delicate tension that props this scenario up, Egoyan and Wilson opt for cheap riffs on Fatal Attraction that simply aren't convincing. The sudden change in Chloe is a cheat. It's an easy way to get out of the situation without really having to deal with what has been driving the conflicts. Liam Neeson and Julianne Moore give it a valiant try, and Moore is such a good actress, she manages to make us feel something for Catherine, but the director has long since abandoned asking what it all means.

Chloe is a chilly affair, meticulously manicured, but lacking in anything true. It's like Egoyan was really shooting a low-grade thriller for late-night cable, but by maintaining an intellectual aloofness, he's trying to make us think it's art. Uh-huh, and he also reads Playboy for the articles.