Slayers Evolution-R is the 13-episode conclusion to the story introduced in the Slayers Revolution set. The first set ended at a great stopping spot tying up most of the loose ends, but left a few things unsolved by Lina Inverse and the gang. This latest release of Slayers is a lot of fun for longtime fans. There are a few blasts from the past and very surprising twists. As with past editions of Slayers, Evolution-R features a lot of action and zany slapstick comedy, but somehow manages to mix in a good story.

When we last left Lina and company in Slayers Revolution they defeated Ducliss, but still had to complete the mission of finding and destroying a jar containing the spirit of Red Priest Rezo. When they begin their search for the jar, Pokota realizes that the jar they are searching for is one and the same as the Hellmaster's Jar that turned him into a stuffed animal. While investigating some ruins, Lina hears singing in the distance. As they approach the sound hoping to find answers about the Hellmaster's Jar, they instead find a set of walking, talking armor named Nama who acts very similar another character from Slayers' past.

After a long, arduous search, they find the jar in possession of a man named Radock. He wants Lina and the gang to protect him from the assassin Zuuma who is back from Slayers Revolution. In return for their protection, Radock promises to give them the Hellmaster's Jar. Can they protect Radock and his son Abel against Zuuma's attacks? Why does Ozzel have such contradictory orders to both protect and destroy the Hellmaster's Jar? Where do Xeloss and the monsters fit in with all this madness? Will Pokota find a way to save the citizens of Taforashia? And finally, will Zelgadiss be able to talk Rezo into changing him back to a human? 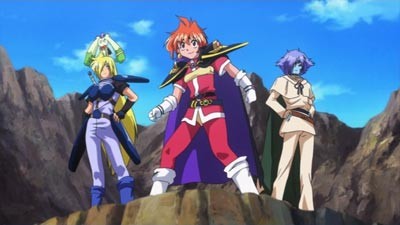 Lina Inverse, as always, is central to this series. She seems much less unhinged and random than in previous seasons, including Revolution. Lina actually tries to unravel the mysteries as opposed to just Dragon Slaving her way through any obstacle. Sure, she is still capable of obliterating an entire city because one guy made fun of her chest size, but this is a welcome move back to her portrayal in the original season of Slayers.

Secondary characters of Pokota and Zelgadiss are given a lot of attention because of their past dealings with Rezo. The always intriguing character of Zelgadiss, especially, gets some much needed screen time in this series. Whereas Slayers Revolution gave Zelgadiss very little to do, here his vendetta against Rezo plays a integral part of the story. Evolution-R even gives a glimpse into his history with Rezo. Rezo is the one who originally turned Zelgadiss into a chimera; now he wants, more than anything, to be changed back to a human. The Hellmaster's Jar, which contains the soul of Rezo, is the key to his wish. 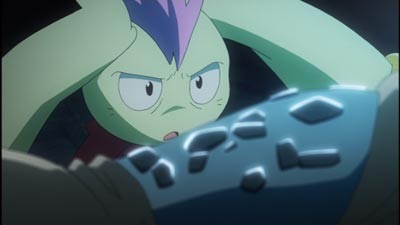 Pokota also is given an enormous role in Evolution-R as he tries to save the citizens of Taforashia. Pokota is a character that could have very easily gone wrong and, as a result, ruined the series. When he first made his appearance in Slayers Revolution, I feared that the series may have "jumped the shark" with the new addition. However, Pokota's mission to save the citizens of his kingdom was a major part of the two latest sets of Slayers and his part in the story is one of the highlights. He makes a great addition to the Slayers universe and hopefully there is more Pokota in the future.

One thing that has always hamstrung Slayers from becoming a top tier anime series is its tendency to throw away many episodes each season to ridiculous, absurd, filler. Slayers Evolution-R is unfortunately no exception. The story picks up right where Slayers Revolution left off with a great opening episode and then, for three entire episodes, they search futilely for the Hellmaster's Jar. That's three episodes of dead ends and utter nonsense under the guise of searching for the jar. The flow of the entire series is hampered by this block of filler episodes; save for a few genuinely hilarious scenes, it was almost a chore to watch. 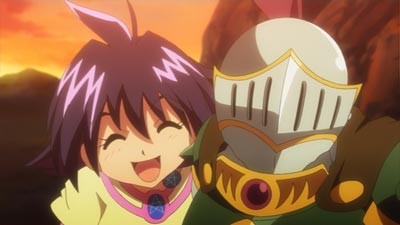 The worst of the bunch was an episode about the fish people that lose their mind right before a tsunami--like days, maybe even weeks, before a tsunami hits. Gourry gets sucked into this sordid tale by getting tricked into thinking he's the father of some fish children and it goes downhill from there. Unfortunately, this throwaway episode was the only one that really focused on Gourry throughout all of Slayers Evolution-R. Finding the jar was a laborious journey. We get it. One episode would have been plenty to get this point across.

The good news is that once these three episodes are over, the story jumps back on track and stays on track for the remainder of the series. The episodes where Lina possesses the Hellmaster's jar are especially great and a lot of fun. While I felt that Revolution was the stronger half, Evolution-R is a worthy addition to Slayers canon that wraps things up with a satisfying conclusion.

Slayers Evolution-R is less dependent on previous series and movies than Slayers Revolution was. Having seen any of the previous series, including Revolution, is not a prerequisite to watching Evolution-R. You will miss out on some inside jokes, but the major plot points and characters are explained in enough detail that newcomers will not feel overwhelmed or too out of the loop. Of course, I highly recommend that you watch at least the first Slayers series along with Revolution before tackling Evolution-R. They are well worth your time if you like your anime with a ton of magical action, sword fighting, and a huge slice of slapstick comedy on the side; watching them first makes Slayers Evolution-R an even more enjoyable experience. 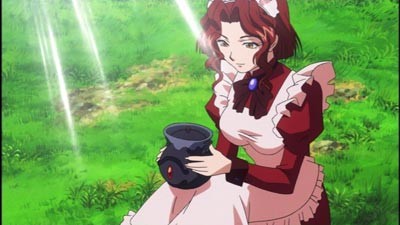 Sound: This set features an English dub mixed in Dolby Digital 5.1 and a Japanese stereo track. I listened mainly to the English track and it sounds great, especially during action scenes where the surround speakers get plenty of use. The English voice cast from Slayers Revolution and earlier series return for Evolution-R. As I have said before, this dub cast is one of my favorites and their work in this series matches the quality of their previous work. One notable exception is Nama. This is a rare instance where I hoped for a main character to die a quick and unceremonious death. In voice actress Eva Kaminsky's defense, the nature of the character Nama calls for this treatment and the Japanese track's version is just as capable of inducing a migraine.

Video: The video is presented with a 1.78:1 aspect ratio in anamorphic widescreen. As was the case with Slayers Revolution, this series looks phenomenal. The image is sharp, the colors are vibrant, and there is no hint of any compression artifacts throughout. Evolution-R is a clean transfer and a fine display of how great anime on DVD can appear.

Extras: The only extras included are textless opening and closing credits and some trailers for other FUNimation releases.

Final Thoughts: Slayers Evolution-R follows the tried-and-true Slayers series template and that's good news for longtime fans. It's fun, has plenty of action, features a good story with some surprising twists, and will have you cracking up on quite a few occassions. Evolution-R is a return to Slayers' roots with similarities to the story of the first season. There are some filler episodes in the beginning, but if you have seen Slayers before and have stuck with the series this long, then you have learned to accept that these episodes come with the territory. Evolution-R is surprisingly more accessible for new viewers than Revolution, but you will probably still want some background on this series before diving in. Recommended. 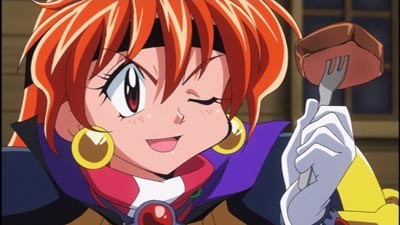