Most Dangerous Man in America: Daniel Ellsberg and the Pentagon Papers, The 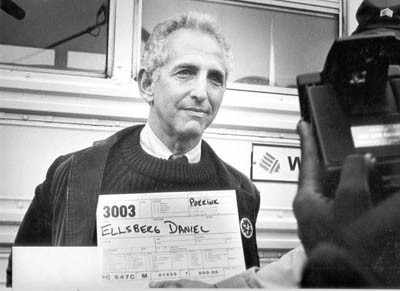 A U.S. President and his administration would never fudge facts in order to lead the country into war, would they? It just seems too impossible in this day and age. As far-fetched as sarcasm in a movie review.


The Most Dangerous Man in America: Daniel Ellsberg and the Pentagon Papers is the documentary of a man who saw just that kind of chicanery in action and decided to do something about it. Dr. Ellsberg was a former Marine who had been working as a government official when he came across evidence that the White House had been orchestrating an unnecessary war with Vietnam dating all the way back to Truman. At the time, Ellsberg was employed by the Rand Corporation, a think tank where it was his job to weigh the conditions under which it would make sense for the U.S. to deploy a nuclear bomb. Having witnessed the truth being distorted under Johnson and also seeing how the day to day in Vietnam didn't add up to what was on the nightly news, Ellsberg suffered a clear crisis of conscience. At the end of the 1960s, he leaked nearly 7,000 pages of government documents that discredited Nixon's case for staying in the war.


The Most Dangerous Man in America was directed by Judith Ehrlich and Rick Goldsmith, and they have put together their film as two distinct, yet conjoined, narratives. One is the history of what happened, of how Ellsberg's whistle blowing changed the course of the Vietnam War. The other is a portrait of Ellsberg himself. He is an interesting man to be sure, someone who had every success and was at the top of his field. He could have kept his mouth shut and gone along. His conscience would not let him. Neither would his heart. His original participation in President Johnson's move to battle nearly prevented a marriage, and his coming around to activism brought the couple back together. Their union has lasted to this day.


It's extraordinary to witness the courage and heroism of true social action. At no time did Ellsberg think he wasn't going to get into trouble. The threat of jail always loomed. Yet, the information became like a living thing and once it was let loose, there was no stopping it. Ehrlich and Goldsmith do a remarkable job of tracking the chain of events that followed Ellsberg unleashing the damning report. He began with the New York Times, and as the government tried to put the kibosh on their publishing their findings, other newspapers began to pick up the story until there were too many of them for Nixon and his boys to stop. And then there is the involvement of the U.S. Senate. Though the other congressmen that Ellsberg had given copies to were too timid to act, a junior Senator from Alaska entered the report into the Congressional record as part of his filibuster against the draft. If you only know Mike Gravel from his appearance on The Colbert Report during the last Presidential Election, prepare to have your mind blown.


As filmmaking, The Most Dangerous Man in America is a fairly straightforward documentary. This is not a point-counterpoint movie, this is the story of Daniel Ellsberg from his point of view, and he both narrates and gets the most camera time. Other participants in the story include the newspapermen, politicians, members of Nixon's "plumbers," Howard Zinn, and Ellsberg's son and wife, and they all get screen time. Nixon is easily molded into the movie's villain. He had some choice words to say about Ellsberg in his taped conversations. Archival footage, photos, and re-creations bring much of what is talked about to life. The technique is solid. The film is entertaining and informative, and the way the information is put together is convincing.


Though Ehrlich and Goldsmith don't spend any time bending the reportage so that it connects to today and the U.S. problems in Iraq, it's hard not to weigh the past against the present. The thing that astonishes me is the disconnect that has caused the press to be gutless and a climate of vitriol that would drown heroes like Daniel Ellsberg were such a figure to emerge today. Have we learned nothing from the victories of journalism and civil disobedience that we now mythologize? The excitement of positivity is temporary, the apathy is permanent. Even Ellsberg suffered the bitter disappointment of the public's ability to hear the rotten truth and then move on without doing a thing to change it.


If nothing else, The Most Dangerous Man in America: Daniel Ellsberg and the Pentagon Papers will hopefully at least give Ellsberg's story the airing it deserves. He merits more than whatever brief mentions he might get in the history books. His example is one we can all aspire to. Let's not forget that America was founded on similar men standing up against the abuse of privilege amongst the ruling body. In their day, they weren't considered traditionalists, they were progressives. If they could hear Daniel Ellsberg describe the multiple levels of secrets that exist within the government today, it would chill them to the bone. When you watch this movie and hear what he has to say, it should chill you, too.