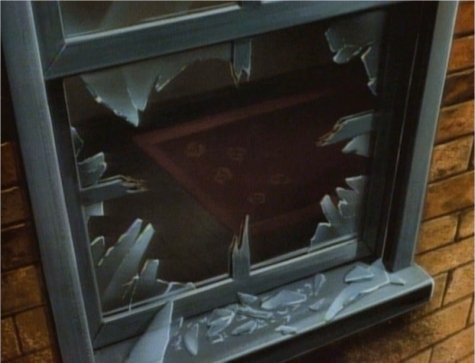 Not to be confused with the long-running "reality show" of the same name---though it earned a name change in syndication for that very reason---animated cult favorite COPS (1988-1989) was a minor but memorable beacon in the 1980s sea of merchandise-driven cartoons. The premise was simple enough: COPS was a futuristic take on Dragnet and the like, though one that heavily favored comic book-style action and characters over straight-laced police procedure. Each episode centered around a case file that, in the standard style of Saturday morning cartoon fare, was wrapped up neatly in just over 20 minutes flat. Created by Kevin Altieri---who also worked on Batman: The Animated Series---COPS burned brightly but fizzled from the airwaves after 66 episodes. Blame Ninja Turtles.

Set in the year 2020 in fictional Empire City, COPS (Central Organization of Police Specialists) includes the standard amount of technological advancements that probably still won't arrive for at least 50 years (if ever), but us kids weren't thinking about such technical details. It's essentially cops-and-robbers with tons of cool gadgets, tailor-made for toys action figures (see below) and other stuff we needed to survive. Our heroes include Agent Baldwin "Bulletproof" Vess, Sergeant P.J. "Longarm" O'Malley, Stan "Barricade" Hyde, Officer Tina "Mainframe" Cassidy and more, while the baddies are represented by Brandon "Big Boss" Babel, Turbo Tu-Tone, Dr. Bad-Vibes, Buttons McBoomBoom and the like. These aren't three-dimensional characters by any stretch, but at least most of them were a bit different from the norm. In addition to the colorful characters, COPS featured stories that mixed action and humor fairly well, resulting in an entertaining formula that helped set it apart from the pack.

Hard to believe, but it's been over four years since Shout Factory unleashed COPS: Volume 1 on DVD, which contained the first 22 episodes and a modest assortment of vintage bonus features. Let's be honest, though: what other studio would bother to follow through at this point? Shout Factory has always stepped up to the plate regarding semi-obscure and niche DVD releases; they've even picked up the slack for Universal's abandoned 1960s-era Dragnet collections in recent months. In any case, very few fans saw COPS: Volume 2 coming, but there's been no preemptive announcement for the third and final collection. But for now, let's soak up a little more nostalgia with this three-disc follow-up, which includes the following episodes: 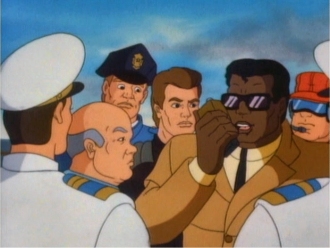 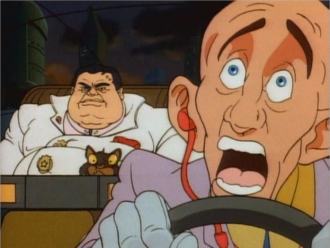 Complete Episode Listing
(21 full-length episodes on 3 single-sided discs)
* - AKA "The Case of The Crime Nobody Heard", which the packaging calls it.

Not surprisingly, these 21 episodes are very similar to those found on Volume 1; like most cartoons aimed at a younger audience, they're stand-alone adventures with a very specific formula. COPS always employed a larger-than-life style that fit in perfectly during the decade of excess: our characters (the crooks, especially) are colorful, over-the-top caricatures, not to mention the tools they use to get the job done. Typical episodes revolve around a ridiculous heist carried out by less-than-capable crooks, in the same way that Rocksteady, Bebop and the Foot Soldiers always manage to be outwitted by the Turtles. Five minutes before the credits roll, our heroes showed to deliver justice accompanied by catchy theme music and a few catch-phrases. It's a tried-and-true formula that gets the job done---and though the novelty may wear off during marathon viewing, it's more than tolerable when stretched out over a few weeks.

Episode highlights include "The Case of The Big Frame-Up" (Longarm's father, Mickey O'Malley, is framed for a robbery and must clear his name), "The Case of The Stashed Cash" (O'Malley helps the COPS look for $5M tucked away roughly 35 years ago), "The Case of The Big Boss' Master Plan" (a two-parter involving a presidential kidnapping), "The Case of The Iceberg Pirates" (Big Boss and company try to hijack an iceberg needed during a brutal heatwave), "The Case of The Lying Lie Detector" (technical problems plague the underused Bowser and Blitz) and "The Case of The Disappearing Dough" (Big Boss tries to destroy Empire City's money and replace it with his own brand of currency). Of course, no 1980s-era cartoon series would be complete without a generous helping of cheese, and COPS is happy to oblige: it's chock full of corny one-liners and plot holes, which pretty much comes with the territory. Luckily, even the unintentional comedy is amusing enough to keep things light and entertaining.

Oddly enough, one episode is absent from the proceedings: "The Case of The Crook With A Conscience", which most episode lists place squarely between "The Case of The Big Little Green Men" and "The Case of Mace's Romance". The reason for this episode's absence is unknown, but perhaps it'll show up on Volume 3 in the (hopefully) near future.

For now, Volume 2 arrives with considerably less fanfare than the previous installment; not surprising, given the franchise's four-year absence. Though the technical presentation and episode count are roughly on par with Volume 1, this stripped-down collection includes no bonus features and a slimmer packaging job. It also seems to be exclusively available at Shout Factory's online store (click the "Buy Me" link above for more info), which may limit its potential audience even more. Here's hoping the slowed momentum doesn't prevent Volume 3 from seeing the light of day. In the meantime, let's see how the caper came down:

Shout Factory is hit-or-miss with their DVD transfers, and it looks like COPS: The Animated Series is slightly below average. Presented in their original 1.33:1 aspect ratio, these 21 episodes exhibit a modest amount of dirt and debris during plenty of scenes, while the image is a generally soft and seems a bit oversaturated. All things considered, though, this series looks decent given its age, budget and shaky road to DVD thus far, so fans shouldn't be too disappointed.

The audio is also a bit thin at times, but this straightforward 2.0 Stereo mix comes through fairly clean and clear (and yes, the music is still pretty catchy!). Episode #12, "The Case of Mace's Romance", exhibits a notable problem, however: vocals are confined to the right channel instead of being split evenly, which tends to drown out the dialogue; additionally, there's a slight audio/video hiccup during the opening sequence. This is most likely an issue with the source material (UPDATE: it is, according to a source from Shout Factory), but it's certainly worth pointing out. Unfortunately, no subtitles or Closed Captioning options are offered during these episodes. 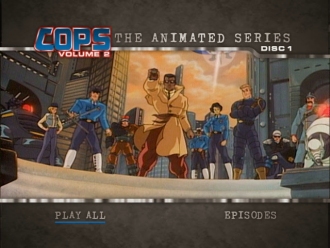 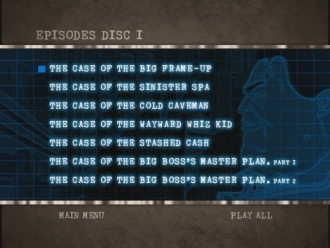 Suited to the series' atmosphere and style, the menu designs (seen above) offer a clean layout, easy navigation and great music. Each 22-minute episode is presented without chapter breaks, while no apparent layer changes were detected during playback. This three-disc set is housed inside a single-width hinged keepcase; no insert booklet is included, but episode names are printed on the inside artwork.

Bonus Features:
Unfortunately, no extras are on board this time around. This isn't a huge surprise, given the release delays...and the semi-obscurity of the series itself, of course. Still, a few art galleries or words from the creative team would've been a nice touch.
Final Thoughts

COPS: The Animated Series, Volume 2 offers 21 more episodes from this short-lived but memorable 1980s series---and even though it's taken four years to see the light of day, fans should sincerely appreciate the follow-up. Story-wise, these adventures are roughly on par with those from Volume 1, serving up plenty of colorful characters, chases, comedy and camp. Shout Factory's three-disc set is a relatively basic effort: the packaging artwork is plain, no extras are on board and the technical presentation has its fair share of issues. Problems aside, die-hard fans of COPS will undoubtedly want to grab Volume 2 to keep the ball rolling. Mildly Recommended.