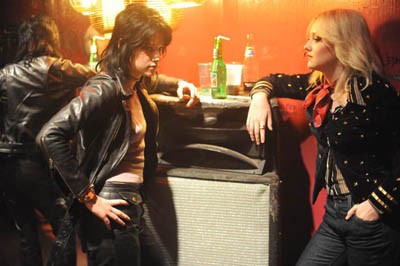 The flash of fame and the burnout of rock 'n' roll excess is a familiar story arc at this point in the game. Enough bands have gone chasing the dream of being the next Beatles and ended up with bupkus for us to know how it all goes. Doesn't mean it's not still a good story and that there aren't unexplored variations. Take for example The Runaways, Floria Sigismondi's film biography of the first all-female rock group. That's one we haven't seen before.

The Runaways started when a young Joan Jett (Twilight's Kristen Stewart) met outlandish record producer Kim Fowley (Michael Shannon, Revolutionary Road) outside of a well-known Los Angeles night club. Jett told Fowley she wanted to be in a band with just girls, no boys. Recognizing a million dollar idea, Fowley introduced Jett to drummer Sandy West (Stella Maeve) and told them to start jamming together. Soon, they had recruited other girls, topping it all off with fifteen-year-old glam chick Cherie Currie (Dakota Fanning). Cherie was a bored music fan with a lot of style whose only accomplishment up until then had been winning her high school talent show for lip-synching to David Bowie. Or, at least, claiming to have won--she walked off the stage in a hail of projectiles. Stars have been made of less.

The first half of The Runaways perfectly captures sleepy, going-nowhere suburban life and the visions of a rebellious future rock music provides for teens who fall under its spell. Kristen Stewart plays Jett as a restless, skulking hunter. She is not a predator, that is Fowley's job, but she's clearly a girl searching for something. Her shoulders hunched, her head down, staring out from under black bangs, she is an alluring enigma. On the other hand, Dakota Fanning portrays Currie as a little girl hiding behind a blank slate. It's not that she has no personality, it's that she leaves herself open for other people to project their desires onto her. It's a tricky thing to pull off. In the quiet scenes with Jett or the alone time she shares with her older sister Marie (stiff newcomer Riley Keough), her guard comes down and we see the real person there.

Naturally, this makes Cherie the perfect toy for Fowley to play with. For all his early talk of female empowerment, he speaks a particularly male language and is more concerned with selling the girls to the horndogs than he is making them role models. He is Svengali by way of Dr. Frankenstein, though as Jett aptly points out, he looks more like the monster than the scientist that created it. Michael Shannon continues to widen his niche as the go-to nutball. His Fowley is an outrageous prick, but man, is he electrifying to watch. 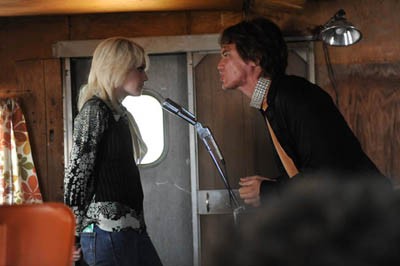 The movie's best section is the first Runaways tour in the U.S. Going from one seedy club to another, working on a shoestring budget, it's full of the camaraderie and backstage antics that made these teens fantasize about being in a band in the first place. It's also where Sigismondi really starts to give us the music. The girls turn into a tight unit on stage, and the euphoria of performing mixes with the sudden rush of fame. At times, the director, whose background is in directing videos for musicians as different as Björk and Christina Aguilera, gives The Runaways the dressed-down, bleached look of old Creem magazine photos. The band's style is a kind of trashy, off-the-street glamour, and the movie looks like it's straight out of the 1970s. Sigismondi sometimes tries too hard--random abstracted images don't gel with the rest of the movie, and the "rise to fame" headline montage is embarrassing--but that is common in first-time directorial efforts, particularly from a filmmaker that is known for her distinct visual aesthetics.

The Runaways begins to drag after the band signs its record deal and heads out for a tour of Japan. It's a flaw of the music biopic genre that they always seem to end up giving undue focus to the hard times, turning them into one big bummer. As with most rock stories, The Runaways is one that can be outlined as success, failure, and redemption. As Fowley pushed Cherie Currie more out in front, schisms began to form. So, too, did the drug intake increase. Once the fall-apart happens, Sigismondi seems lost for an ending. The epilogue with successful-1980s Joan Jett ends the movie with a thud. Better to have cut to the credits while a reinvigorated Joan was jumping on her bed, banging out an early version of her take on "I Love Rock 'n' Roll." We know what happened to her after that, let us fill in the rest.

The best thing that any rock movie can do is send the viewer home wanting to get his or her hands on the music. In that, The Runaways succeeds. I'm listening to Joan Jett's "You Don't Know What You've Got" as I type, have been listening to her Greatest Hits through the whole review. The tunes are the legacy, and the fact that Jett and Currie eventually took control of their lives and careers was their triumph. Despite the pitfalls, this is what makes the Runaways so significant to the history of rock music. If you don't think that seeing women prove they could get on a stage and outplay the guys isn't important or doesn't mean anything, you should check out the documentary Girls Rock!, about Portland's Rock 'n' Roll Camp for Girls. Cherie Currie and Joan Jett are actually doing benefits to raise money for the camp on the heels of The Runaway's Northwest release. By their continued example, more young ladies will be able to pick up electric guitars and have the foreknowledge to do it their own way.