Eccentricities of a Blonde-Haired Girl 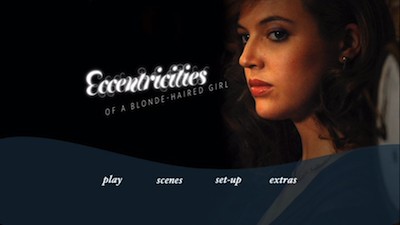 Manoel de Oliveira's 2009 film Eccentricities of a Blonde-Haired Girl (Singularidades de uma Rapariga Loura) is a slight but well-manicured exercise in literary formalism. Based on a 19th-century novella by Eça de Queirós, who is credited with introducing realism to the fiction of de Oliveira's home country of Portugal, this short film--running at just about an hour when you exclude the credits--has the haughty air of antiquated writing, complete with an undercurrent of restrained romanticism. The end result is more Masterpiece Theatre than Merchant Ivory, but depending on your taste, that may be satisfying enough. I found it underwhelming, but still mildly enjoyable.

Eccentricities of a Blonde-Haired Girl is the story of Macário (Ricardo Trêpa), a young accountant who works at his uncle's clothing story. From his office, he often spies a pretty girl across the way, and he contrives a way to meet her. Her name is Luísa (Catarina Wallenstein), a fairly unexpressive young woman, but the preservation of her mystery is possibly what keeps Macário interested. He proposes marriage, but when his uncle refuses to support it, Macário is suddenly without a job and the means for which to support a wife. Finding no work in town, he goes away to earn a tidy sum, only to be swindled out of it on his return. Lucky for him, his dedication softens his uncle and the means to have Luísa as his own open up to him. Except, well, there are those promised eccentricities to deal with, and heartbreak is still in the cards.

Macário's story is told in the past tense, narrated by the young man during a train ride. He shares the tale with the woman in the seat next to him (Leonor Silveira), noting that it's easier to tell a stranger of one's failures than to confide in someone who knows you. Both actors gaze off to the right, almost as if they are watching the events unfold on a movie screen all their own, adding to the sense of disconnection. de Oliveira is creating a structured world where etiquette and propriety hold more sway than romantic passions, and there is always a feeling that emotion is held back. All the performances in Eccentricities are reserved, with Ricardo Trêpa in particular keeping his shirt collar buttoned all the way up. Physically, he remains stiff, but his body language and his measured voice make up for the lack of exaggeration. Unfortunately, I think much of the subtext is lost without the prose to give voice to the story's emotional core. You get the feeling, but any gravity or greater meaning seems to have faded.

The most impressive aspect of this film is not the story, however, which honestly, didn't move me much at all and is somewhat forgettable; no, the best part of Eccentricities of a Blonde-Haired Girl is de Oliveira's careful construction of each frame, and the vivid digital photography of Sabine Lancelin, who has worked with de Oliveira on numerous occasions, including their Bunuel-tribute Belle Toujours (a film I intensely disliked). Eccentricities of a Blonde-Haired Girl is a lovely movie, with artfully lit interiors and an excellent external clarity. de Oliveira shows the passage of time through a series of horizon shots, letting the natural light settle over the city. While I may soon forget the particulars of the script, I'll probably be thinking about how good Eccentricities of a Blonde-Haired Girl looked for quite a while. 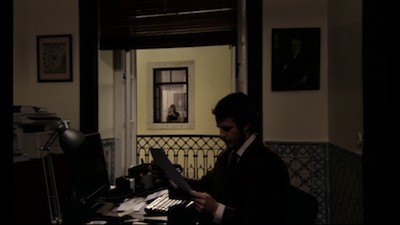 Video:
The 1.85:1 anamorphic transfer of Eccentricities of a Blonde-Haired Girl is nicely rendered by Cinema Guild. The colors are amazing, and the shadows have a deep richness to them that is pleasing. I found some of the resolution to be a little soft, though nothing altogether too awful.

Sound:
The 5.1 mix of the Portuguese soundtrack was very good, with subtle hints of atmosphere. Most of the dialogue was pretty evenly centered, but Eccentricities of a Blonde-Haired Girl is a very quiet film, and one should note how well the silence is rendered, too. There is also a 2.0 track.

The optional English subtitles are easy to follow and unobtrusive to the image.

Extras:
Cinema Guild has a packaged Eccentricities of a Blonde-Haired Girl in a standard plastic case with a paper insert featuring liner notes by James Quandt, a fan of de Oliveira's and the programmer at the TIFF Cinemateque.

The one movie-specific extra is a lengthy press conference (over an hour) from the 2009 Berlin Film Festival. In the video piece, de Oliveira and producer François d'Artemare present the film alongside actors Trêpa, Wallenstein, and Filipe Vargas.

There is a teaser trailer for Eccentricities, as well as a special preview of de Oliveira's next film, The Strange Case of Angelica.

Finally, there is a recent short film from Manoel de Oliveira, The Panels of São Vincente de Fora - A Poetic Vision (16 minutes), in which the figures in a 15th-century Portuguese painting come to life to discuss the work of art that portrays them.

FINAL THOUGHTS:
Eccentricities of a Blonde-Haired Girl is a short literary exercise by Portuguese director Manoel de Oliveira. The romantic tale of an accountant trying to make his way in the world in order to marry the beautiful girl he sees in the window across the street is based on a 19th-century novella, and though de Oliveira modernizes the setting, he retains the repressed emotions of the original time period. The movie only goes about an hour, and its austere tone keeps the viewer from getting too deeply involved. It is, however, very pretty to look at and doesn't require much investment, so worth a Rent It. 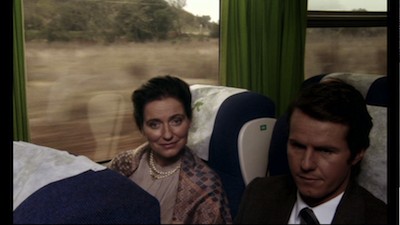