Shout Factory // R // July 20, 2010
List Price: $26.97 [Buy now and save at Amazon]
Review by Stuart Galbraith IV | posted July 10, 2010 | E-mail the Author
An unusually ambitious sci-fi thriller from Roger Corman's New World, Galaxy of Terror (1981) may be a shameless rip-off of Alien (1979), but it's an entertaining one that delivers the goods, crammed as it is with gruesome makeup effects, an indescribably outrageous alien-rape sex scene and, for its budget level, extremely imaginative art direction and Star Wars-style visual effects. The entire film runs a taut 81 ½ minutes, and there's something visually interesting going on in every scene, though the script loses a lot of steam in its middle-section.

Previously available on VHS and laserdisc but neither DVD (in region 1) and Blu-ray up to now, Shout! Factory Blu-ray of Galaxy of Terror is an excellent high-definition presentation crammed with good extras, including the screenplay in PDF format and a making-of documentary nearly as long and exhaustive as the film itself. 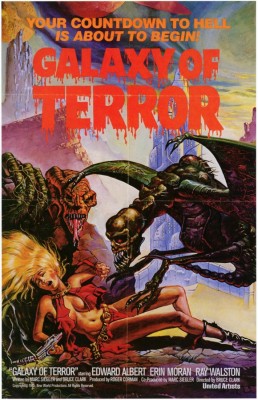 In a futuristic society in some corner of the galaxy, a revered mystic called The Master dispatches a rescue (space)ship to the storm-swept, fog-shrouded planet Morganthus, in search of survivors who encountered deadly alien beings. (The Master's glowing red head obscures his face, though sharp-eared listeners will recognize the voice of the actor playing him.)

The crew finds the remains of the crashed ship along with a huge, pyramid-like structure, and at about this point the film devolves into a routine but amusingly gory body count movie with colorful set pieces built around very little story. (However, the answer to the story's central riddle, finally revealed at the end, is fairly clever.)

Where Alien cost $11 million to produce, Roger Corman reportedly brought Galaxy of Terror in for a paltry $700,000. (The film's DP puts the cost at between $1-2 million, still extraordinarily cheap for something like this.) While the cheapness shows here and there, like other Corman films it delivers a really big bang for its buck, and in many respects it looks more expensive than Corman's $2 million Battle Beyond the Stars, produced the year before. There are many and varied special visual effects, far more than the usual film of this kind, including even some brief stop-motion. The imaginative art direction - supervised by then-unknown James Cameron, who also directed the second unit - obscure the meager budget in other ways, often by blurring the lines between the sets and miniatures and/or matte paintings via forced perspective, etc. In some shots of the spaceship interior, spray-painted Styrofoam Big Mac packaging is plainly visible.

Typical of Corman's films, Galaxy of Terror was a training ground for hungry young talent. Besides Cameron, actor Bill Paxton worked on the film as a set decorator, Englund was just shy of Nightmare on Elm Street horror stardom while actors like Grace Zabriskie and Zalman King soon moved on to bigger and sometimes better things. Robert and Dennis Skotak supervised the visual effects.

That notorious interspecies rape, with the slimy, bus-sized monster mealworm somehow managing to strip Damiea of her spacesuit, oil her up and bring her to orgasm, is awesomely ludicrous, and the kind of thing that distinguishes it from the more serious shocks of Alien. But as drive-in fare, it's perfect.

Prompting a first-ever firmware update on my PlayStation 3, Galaxy of Terror is an impressively loaded disc for such a minor if cultish film. The 1.85:1 transfer is basically flawless and much superior to what 35mm prints of movies like this looked on drive-in screens back in 1981. The 2.0 audio is loud and generally effective, though I found the dialogue mixed too low to my liking and was constantly adjusting the volume. The disc is region "A" encoded. There are no subtitle options.

Unlike Shout! Factory's Blu-ray of Death Race 2000, which recycled a lot of previously released supplements, Galaxy of Terror's extras are all new.

The main extra is a long but very entertaining making-of-documentary, Tales from the Lumber Yard: The Making of 'Galaxy of Terror'. Running 1:02:54 and presented in high-definition, it features interviews with most of the surviving cast and crew with the notable exceptions of Erin Moran and James Cameron. Supplemented with excellent behind-the-scenes photographs and conceptual art, it's nostalgic and informative, and allows its interview subjects to be frank in their opinions of Cameron and Corman's methods, which aren't always complimentary.

Some of the documentary's anecdotes are repeated for the disc's audio commentary, featuring O'Connell, creature effects guys Allan Apone and Alec Gillis, and moderator David DeCoteau, who cut his teeth as a production assistant on the film. Additionally, pop-up factoids about the picture, compiled by Brian Albright, can also be run in conjunction with the feature.

Trailers in high-def but 1.37:1 full frame for this and other New World titles are included, along with an extensive photo gallery and the film's screenplay in PDF format.

Finally, the Blu-ray sleeve can be flipped for alternate artwork (featuring the film's original release title, Mind Warp - An Infinity of Terror), while a 12-page booklet features an informative and enjoyably appreciative essay by Jovanka Vuckovic.

For fans of drive-in exploitation and/or pre-digital age science fantasy/horror films, this long out of circulation cult film is like manna from heaven, and Shout! gets top marks for its transfer and the disc's extra features. Highly Recommended.