A cornerstone of the Criterion label, Michael Powell and Emeric Pressburger's sumptuous, haunting The Red Shoes (1948) was a landmark laserdisc release around 1994 and one of Criterion's first DVD offerings back in 1999. The new Blu-ray release, coming on the heels of ITV's Region B release from a year ago, is stunningly beautiful, its digital restoration revelatory with an illustrative comparison hosted by lifelong fan Martin Scorsese, included as an extra.

It's one of the all-time great films and almost certainly the best ever about the art of dance, though personally I prefer Powell-Pressburger's A Matter of Life and Death (1946) and Black Narcissus (1947). Those films strike me as a bit more personal whereas The Red Shoes, in development since the mid-1930s, is more the perfectly realized collaboration of disparate artists - dancers, painters, cinematographers, the kind of happy coming together of talent that on rare occasions results in a one-of-a-kind film (e.g., Casablanca). Nevertheless, The Red Shoes is certainly one of the most beautiful films ever made, innovation is everywhere, and this high-def restoration is superior even to the original nitrate prints. 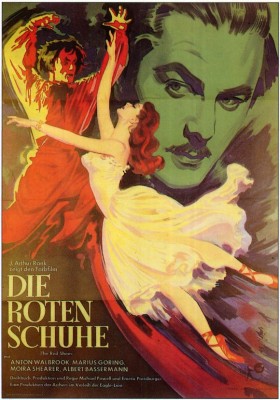 Shearer is Vicky Page, an aspiring ballerina whose patron-of-the-arts aunt arranges a meeting for her with Boris Lermontov (Walbrook), the leading ballet impresario. Though annoyed by the aunt's duplicity, Lermontov is mildly impressed by Vicky's answer to his question, "Why do you want to dance?" She replies, "Why do you want to live?"

Simultaneously, young composer Julian Craster (Goring) is disheartened after hearing one of his original compositions stolen by his mentor for Lermontov's latest ballet. However, recognizing Craster's potential Lermontov takes him on as an assistant conductor. In the tradition of 42nd Street, Lermontov is an emotionally aloof workaholic and martinet, demanding 100% commitment from his dancers especially. When his prima ballerina (Ludmilla Tchérina) suddenly announces her intentions to marry, Lermontov takes this as a personal betrayal, but in the pliable, dedicated Vicky he sees the ideal replacement - with he has her Svengali.

Concurrent with Craster's promotion, Vicki becomes a sensation starring in an adaptation of Hans Christian Andersen's fairy tale The Red Shoes, about a vain, deceitful peasant girl whose red shoes stubbornly refuse to stop dancing, literally driving the girl to her death from exhaustion. This 17-minute ballet in the middle of the film (according to the onscreen program, it's presented "under the patronage of H.S.H. Prince Louis II of Monaco," Rainier III's predecessor) is stylistically very different from the rest of the film. It's like a series of paintings come to life, and mixes ballet performed by top dancers with much cinematic stylization, including imaginative trick photography.

In the last part of the film Vicky and Craster fall in love, which the proprietary (and coded homosexual) Lermontov takes hard. For her part, and drawing parallels to The Red Shoes ballet, Vicky must choose between her love of dance and the love she shares with Craster.

The impact of The Red Shoes was monumental. It profoundly impacted the direction of Hollywood musicals that all-too-obviously aspired to its greatness, in films like An American in Paris and Invitation to the Dance, and reportedly Walbrook's character continues to haunt fan Martin Scorsese's dreams.

The theme of the film is one to which all artists can relate, though it surprised general audiences coming so soon after a World War and its concerns with sacrificing one's life for country and abstract concepts of freedom. The Red Shoes is about living and dying for one's art, and the all-consuming selfishness that drives it. "A dancer who relies upon the doubtful comforts of human love will never be a great dancer," Lermontov insists, "Never."

What began as a vehicle by producer Alexander Korda for his wife, actress Merle Oberon, evolved years later into a collaborative effort not only between Powell and Pressburger, but one that encompassed the equally significant contributions of surrealist painter Hein Heckroth, who designed the film, cinematographer Jack Cardiff, composer Brian Easdale, and principal dancers Shearer, Léonide Massine, Robert Helpmann (here looking like a demented Fred Astaire), and Ludmilla Tchérina. Rather than hire actors who could dance, Powell-Pressburger cast superb dancers who could act. All come off extraordinarily well, especially Massine, and in some respects their performances seem less dated than the more classically theatrical style of Walbrook and Goring. Moreover, their sweat, clashing egos and obvious sexual preferences - this at a time when homosexuality was still technically illegal in Britain - add a backstage verisimilitude you couldn't fake. When Tchérina's prima ballerina retires and her fellow dancers enthuse about how she'll now be able to sleep in and eat chocolates, the enormous sadness in her eyes is real.

The integration of dance and story is entirely successful. Try as he might, Gene Kelly was never quite able to recapture what had so impressed him about the picture, and it rendered earlier attempts to introduce ballet sequences into mainstream films (e.g., The Goldwyn Follies, 1939) even more gaudy and ludicrous than when they were new.

Visually, only a few other Powell-Pressburger films equal it. There are many dazzling moments, a personal favorite being Vicky's rainy Saturday matinee performance of Swan Lake at a cheap music hall-type theater, where while spinning (and while the subjective camera captures her perspective) she catches sight of Lermontov in the audience. The Red Shoes ballet, designed by a painter and looking it, overflows with great dancing (particularly by Massine as the shoemaker) and cinematic innovation, such as a wonderful vignette where some discarded newspaper transforms into a dancing Helpmann.

Criterion's new Blu-ray edition of The Red Shoes includes a wonderfully illustrative restoration demonstration hosted by Martin Scorsese. The "before" and "after" clips are shocking and heartening at once. The original black and white separation negatives, on nitrate stock, have extensive mold damage and negative shrinkage that, without the aid of digital technologies would have been prohibitively expensive to restore if possible at all. As Scorsese points out, the kind of matrix alignments and improved sharpness possible with computers today allows for a new version of the film that's actually sharper and with more truer color than was possible in 1948, on theatrical prints. One need only look at the pre- and post-restoration clips to see the staggering difference. The UCLA Film & Television Archive's Robert Gitt, who supervised the restoration, talks about the process in a booklet essay. The mono audio is fine and the region "A" encoded disc is supported by SDH subtitles.

Most of the supplements date back to the 1994 laserdisc or 1999 Criterion DVD. Included is an audio commentary by historian Ian Christie with additional comments by Scorsese. It features Goring, Shearer, Cardiff, and Easdale, all of whom have since passed away, and which therefore underscores the historical significance of these priceless commentaries.

Also from earlier releases are excerpts from the Powell-Pressburger novelization of The Red Shoes and Andersen's fairy tale, both read by actor Jeremy Irons; a still gallery of Martin Scorsese's collection of Red Shoes memorabilia and production and publicity material (it seems to have been completely rescanned for high-def); The Red Shoes Sketches, a comparison of Hein Heckroth's painted storyboards; and a theatrical trailer (in high-def).

New material includes Profile of 'The Red Shoes', a documentary licensed from Carlton that provides a nice, 30-minute overview of the film's history; and a 2009 interview with editor Thelma Schoonmaker, also Powell's widow, about the film and its place in cinema history. Finally, critic David Ehrenstein provides an unusually helpful essay about the film for the booklet.

Needless to say, this is must for any serious collection, and an upgrade where the bump to high-definition is eye-opening (the restoration demonstration featurette would make a good demo for the unconverted). A great film that looks better than ever in high-definition, The Red Shoes is a DVD Talk Collector Series Title.