I've heard all the hype about Avatar. I'm told people have become enamored with the fictitious world of Pandora created by James Cameron, and that they've marveled at the technology he created, on his own, to realize his vision. I'm not scoffing at that whatsoever; if nothing else, breaking new ground to turn an idea into reality, regardless of what arena it is done in, is worthy of praise. After all, this is how technology and film evolves. But regardless of all of the new techniques and technology created and used for the film, it's still a film, and it should undergo the same scrutiny as other works.

In Avatar, Cameron seems to have continued his history of "wow" by showing people the possibilities of what can be done with computers and technology to help illustrate a story, but, as Nick Hartel points out in his review of the film, what's lacking in the story can't be fixed with technology. Many people have said the tale is reminiscent of Dances With Wolves. However, combining the story ideas with these amazing visuals, I'd say it's a helluva lot closer to The Abyss, except with slightly fewer sucking noises. 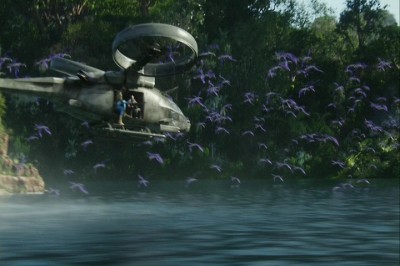 In Cameron's story, Jake Sully (Sam Worthington, Terminator Salvation) is a paraplegic Marine sent to perform a mission on behalf of his deceased twin brother. The mission is to be part of a program of avatars in a land called Pandora. Avatars are the hybrid bodies of a people called the Na'vi. The Na'vi, with their blue bodies, tower over humans by several feet, and they are appreciative and respectful of their land and the animals that inhabit it. Jake's task is tough, though the lead scientist, Dr. Grace Augustine (Sigourney Weaver, Wall-E), tries to minimize his role by pointing out that he is ill-prepared for the task. In fact, he hasn't performed any research on the Na'vi. However, Jake manages to prove her wrong and integrates his avatar with the Na'vi rather adroitly. He meets and develops a relationship with Neytiri (Zoe Saldana, Star Trek) and becomes captivated with her and her clan, the Omaticaya, which includes Neytiri's mother, the group's spiritual leader. 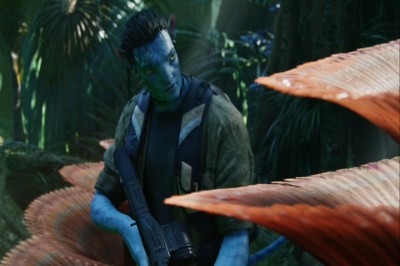 Soon, Jake's mission becomes more of a military operation. Colonel Quaritch (Stephen Lang, Tombstone) gives Jake the chance to regain the use of his legs if he continues his infiltration of the Na'vi to obtain the most private information. The military is on Pandora to acquire a mineral called unobtainium (I'm not kidding). By allowing Jake to get deeper with Neytiri and the Omaticaya, the military will take home the maximum amount of unobtanium. Yeah, kind of like the "Blood for Oil" Message that surrounded the Iraq occupation. As he becomes more familiar with Pandora and its people, Jake has an attack of conscience, and he tries to do what he can to stop it.

Now as far as the story goes, doesn't it seem more than a little unimaginative? Say you gave me a story about an undercover cop that really likes the undercover life until he's pressed into making a decision on whether to be legit or a criminal for the rest of his life. Isn't this at the heart of Jake's character development in Avatar?. At least in a cop movie, I don't see 10-foot tall blue people. Perhaps the better question is, shouldn't the story be worthy of the visuals bestowed upon it? Cameron's Terminator 2, had a story that you bought into a little bit, and you could say the same thing about Titanic. 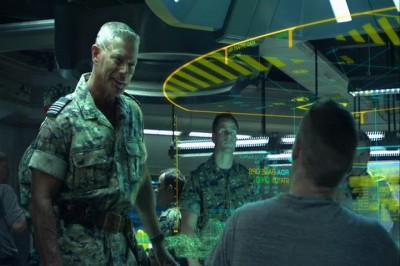 So what makes Avatar so special? To be honest, I'm not sure. All I got out of Avatar was two hours and 40 minutes of undeniably cool visuals and amateurish dialogue, but then again I could essentially say the same thing about Revenge of the Sith, equally cheesy dialogue and facial expressions. It seems like people tend to rave more about the visuals than the story, or are saying "The writing stinks, but ..." And while I can appreciate and respect it, it's past my understanding. Kind of like Pink Floyd or Phish concerts.

A note for those having playback problems: apparently, Fox is using the newest BD-Plus/DRM mojo for Avatar, so you should ensure your Blu-ray player has the most recent firmware on it before descending back to Pandora, as it were. 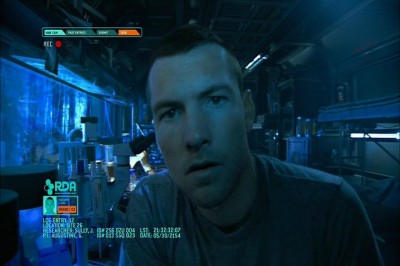 
Whatever adjective you want to use to describe how beautiful Avatar looks on Blu-ray doesn't do it justice, mawkishness aside. Fox presents the film in 1.78:1 widescreen using an AVC encode, and it's a standard setter. A friend of mine said that when it came to Avatar, the Blu-ray was like a Pixar movie, with much more character movement and detail. Speaking of detail, it's incredible. In a scene in the film where Neytiri paints Jake, you can spot the extra makeup caked on his torso. Individual pieces of dirt and grass are easily discernible, and colors are vibrant and reproduced as accurately as can be. Honestly if you have a television screen more than 40 inches in size, you really have no excuse to avoid a Blu-ray player and a copy of Avatar to show off Blu-ray capabilities. It's a revelatory experience any way you slice it.


If the stellar presentation doesn't wow you, goodness knows the lossless DTS-HD Master Audio track will. You marvel in the little moments like when Jake's avatar runs around for the first time and slides in the dirt, the dirt pans in the front channels. Directional activity during the extended Pandora sequences is active and effective, whether it's when Jake and Neytiri are spending time in Pandora or when the Colonel fires a rifle at a ship. Those are just a couple of moments that demonstrate the film's soundstage the film possesses, but others include Hometree's demise and the final battle between the Na'vi and the military. No speaker system alive can tame Avatar, I tells ya! Kidding aside, the sound is reference quality, far and away.


The only extra (if you want to call it that) is a copy of the film on standard definition on a second disc (hence the screenshots). You'd think a film that talks about loving the environment would not have the consumer suckle at the Cameron teat for a second or even third go-round, but belly up at the bar for future releases, friends. 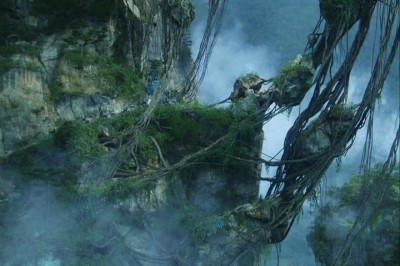 
For its off-the-charts 'look at me!' factor, Avatar delivers in every aspect. Its picture and sound are the best I've seen or heard, and there's no doubt this is a new bar for aspiring filmmakers to raise their game if they choose to do so. But if the attractive blonde isn't all that smart, you might want to reconsider sleeping with her, lest you experience an unfulfilling encounter. Recommended as a rental only, as you can make book on a double-dip coming down the road.