First and foremost, I am predisposed to absolutely hating this DVD. I can't dance
and I despise any and all dancing shows. While I enjoy working out and keep a regular
workout regimen, I quickly lose interest in cardio routines that take longer than
a half hour to complete.

Fame The Dance Workout teaches you three separate dance routines and strings them
together at the end of the 69-minute video. In the first 15-minute routine, Kherington
Payne and a group of three other women guide you through Alice's senior dance number
that resembles something that the Tampa Bay Buccaneers Cheerleaders would perform
during the two-minute warning of a football game. Even alone, in the privacy of
my own home, I felt ridiculous trying this routine out. The moves were extremely,
uh, feminine, I have no rhythm, and my feet don't do what the smiley people
on the television's feet do. I felt like I was in the Stifler dance off scene from

American Wedding
only Stifler could actually dance. After only a few minutes of this private humiliation
I realized that I am not even close to the target audience of this release and there
was no possible way I could give this disc a fair review. 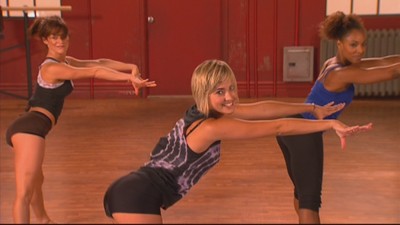 With that revelation in mind, I enlisted my wife, who watches and loves all the
dance shows and movies, to run through the routine with me while I stumbled, bumbled,
and grumbled my way through it like the trooper I am. The first routine, Kherington's
Modern Dance, is strictly one for the ladies. However, the next routine is a guy's
routine and the last routine, an African dance, is gender-neutral. Each routine
involves the instructor breaking down the routine into smaller segments and rehearsing
them a few times at increasing speeds. Then at the end of the segment you go through
the entire routine a couple of times at full speed with the music playing. 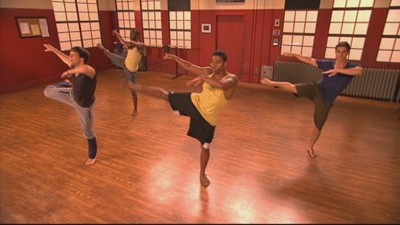 The second routine, led by Paul McGill, is a 16-minute Jazz Dance segment. I am
not sure what the moves in this routine have to do with jazz, but I assumed that
this dance was somehow performed to jazz music in the movie. After my wife was almost
in tears laughing at my assumption, I'm fairly certain it is incorrect. The routine
involves ballet-style moves that appear similar to what you would see in a gymnastics
floor routine in between all the flips. Many of the moves are difficult for a newbie,
such as myself, to pull off with such minimal instruction. 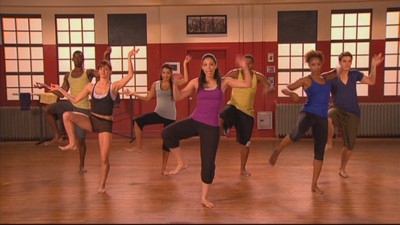 Kristy Flores' African Dance is by far the most fun routine to try out. This 22-minute
segment teaches you the routine which involves some chicken-dance-like movements,
cool stances, and a lot of hopping around. The routine looks so ridiculous that it's hard
not to have fun trying to perform the moves. Plus, the actors legitimately look
like their having fun with it, which helps remove any tension on the viewer's part.

In the final section, Fame Dance Finale, each of the previous individual segments
are reviewed with a slow beat, then a faster beat, and finally at full speed to
the music. After reviewing each segment, all three pieces are pulled together into
a single routine that you perform three times at full speed. Here, finally, is where
the workout portion comes into play. Whereas the first three sections were more
instructional, this final section is all action and a makes a decent 15-minute exercise.

I am not convinced this DVD has a lot of replay value. The entire video itself is
quite long weighing in at 69-minutes. Once you have learned the moves, there is no benefit to viewing the
first three step-by-step instructional segments. That removes the bulk of the video
leaving just the 15-minute ending section that combines the three different dance
routines. While this will likely be fun for fans of the movie Fame, even they will
get bored of the same short routine eventually.

The major issue that I have with this DVD is that it is marketed as a workout video.
The DVD cover urges you to "Get Fit with Music & Moves from the Movie!" It also
claims that there are "4 Fun Dance Routines to get you IN SHAPE." Fame Dance Workout
is not a workout video at all and really just a dance lesson for fans of the movie.
The workout part is a side effect of performing the routines. Judging this DVD solely
as a workout video, it receives a low score. The routine is poorly designed, lacking
warm-ups and stretches, and makes no effort to keep your heart rate at an efficient
calorie burning level. That said, you will work up a sweat performing these moves.
If you are a fan of the movie and have an interest learning some of the dance routines,
this video--specifically the final section--might be beneficial as a supplemental
workout to your normal routine.

Audio: The sound is in Dolby Digital 2.0. The music track sounds great and you can
still easily pick out the instructions from the actors on the screen.

Video: The video is presented in 1.78:1 anamorphic widescreen. This video was released
in 2009 and looks sharp. I did not notice any compression artifacts.

Extras: No extras are included on this disc.

Final Thoughts: If you're looking for a workout routine in the traditional sense,
well keep on looking. This DVD claims to be a dance workout, however, it is much
more dance and much less workout. There are much better and more efficient workout
DVD's on the market. While there's no doubt that this routine burns calories, this
video is exactly how I envision a dance class being conducted. If you enjoy watching
dance movies or performing dance routines, this might be a DVD that will get you
off the couch and moving, which is never a bad thing. Rent It, but only if you like
the movie Fame or other dance shows.