Opium and the Kung-Fu Master

Opium and the Kung Fu Master is the latest release as a part of Funimation's Hong Kong Connection, which is a collection of fifteen classic Shaw Brothers films. Funimation claims that these films influenced today's most influential filmmakers. Nowhere is that more apparent than in Quentin Tarantino's movies that pay homage to the Shaw Brothers kung fu films--Tarantino even uses the Shaw Brother's SB logo in the beginning of Kill Bill Vol. 1. 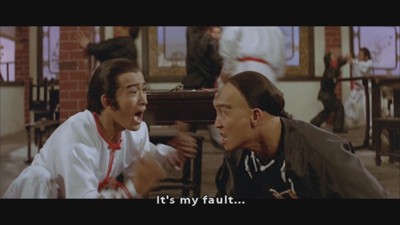 Many kung fu films fall into the trap of tacking on a plot merely as a vehicle to move its action stars to the next fight sequence as quickly as possible. Opium and the Kung Fu Master is no exception, however the plot here is a somewhat deeper than the average kung fku flick. Opium and the Kung Fu Master, released in 1984, touches on opium addiction and how it can ravage families, friendships, industry and even an entire city. Master Tie (Ti Lung, a Shaw Brothers film legend) runs a martial arts school whose students police the streets of their town. One night Gua Si (Robert Mak Tak Law) and Wang An (Ma Chao) are patrolling the streets and come to the rescue of a lady being accosted by two thieves in her home. The two thieves are excellent martial artists who give the students all they can handle until Master Tie comes out and makes the save. 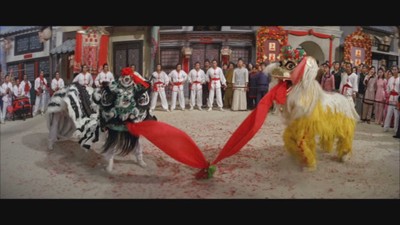 Following this is a wicked cool lion dance competition between Master Tie's school and rival Master Tian's school. The lion dance involves two members from each school donning a lion costume and battling for what appears to be a head of lettuce hanging in the center of the arena. The two lions mix dancing and fighting to the beat of the drums while they attempt to grab the prize. This scene is just so awesomely weird that it deserves special mention. Master Tie's students ultimately win this competition and set off to celebrate. In their euphoria, the students taunt Master Tian's students into a bar fight, which is broken up by Rong Feng (Chen Kuan Tai) who wants to fight Master Tie to settle the score.

Rong Feng also happens to be an opium drug lord who seems quite pleased that many of the local townsfolk are becoming useless drug addicts. Master Tie begins using opium merely to be sociable. Along with many of the townsmen, his opium use slowly forms into an addiction that begins to consume his life. Opium and the Kung Fu Master then takes a tragic turn as many characters die unexpected deaths and Master Tie struggles to regain his former glory as a martial arts master and battle Rong Feng. 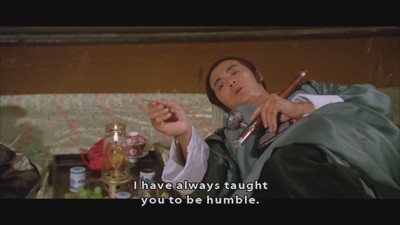 Tang Chia, a legendary martial arts choreographer, directs Opium and the Kung Fu Master and also plays a supporting role as Master Yi Zheng. The fight scenes in this movie are abundant and, for the most part, fantastic. Tang Chia mixes in a wide variety of martial arts techniques, moves, and weapons. Outside of the typical swords, hooks, and spears, the weapons used in some of the fight sequences are unique. One of the thieves in the opening fight uses a metal ring slightly larger than a basketball hoop to great effect. In another fight, Master Tie ties two small boards to the end of a metal pole and proceeds to mow down his opponents with the makeshift weapon. Some of the sets, however, look so fake and obviously constructed on a sound stage that they momentarily take you out of the film. In particular, one scene located on the docks of a lake looked like it was filmed inside the setting of a children's boat ride at Disney World. 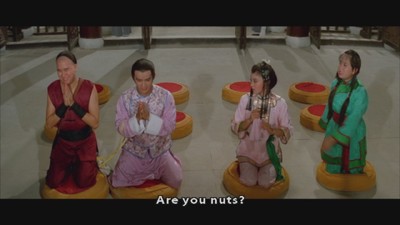 Audio: I spent about 5 minutes watching the English 2.0 Dub and it is just awful. Its only use is perhaps for some good laughs with friends and beer. Lots of beer. The Mandarin mono subtitled track is a much more enjoyable experience and recommended to all but the most staunch subtitle haters. There are a few subtitles that disappear too quickly for the average reader, but that only happens a few times. The mono audio track is serviceable considering the source material is from 1984. The sound is consistent and crisp throughout the film.

Video: The video is digitally restored and presented in 2.35:1 anamorphic widescreen. I can easily imagine how horrible this movie looked in its VHS days and there is no doubt that old school Opium and the Kung Fu Master fans will be pleased with this transfer. In several scenes where the camera pans across the set, there is noticeable squeezing of the image at the edge of the frames--similar to a fish-eye lens effect. I am not sure if the cause of this effect was the source material or some issue with the transfer, but I found it distracting in several scenes. Note that my wife did not even notice this until I pointed it out. Other than that anomaly, the video looked great--very clear, a good level of detail, and relatively vivid colors. There is some film grain, but that is to be expected with an older kung fu film and, frankly, it adds to the atmosphere.

Extras: The only extra included on this DVD is some Funimation trailers.

Final Thoughts: Opium and the Kung Fu Master is an interesting marital arts flick. The action scenes are creative, well choreographed, suitably epic, and fun to watch. The story itself mixes a bit of comedy with the seriousness of an opium house that is tearing apart a small town. The plot elements are never fully developed and the ending is abrupt. However, as far as kung fu movies go, the story is better than average and touches on subjects not normally seen in this genre. Overall, this film makes for an enjoyable 90 minutes of classic Shaw Brothers martial arts action. Recommended. 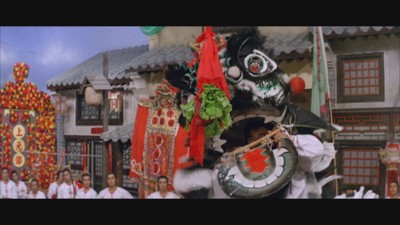