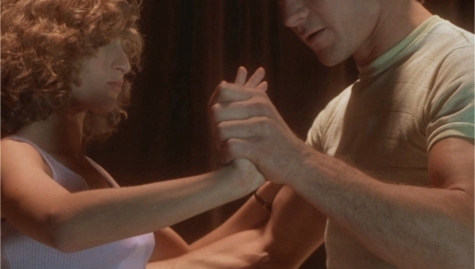 OK, so the last time I reviewed Dirty Dancing (2003's Ultimate Edition DVD), I sounded a little bit like The Grinch. That review marked the film's third release on DVD, which already bordered on overkill. Since then, it's been released four more times: as a 20th Anniversary Edition DVD and Blu-Ray (2007), and now this Limited Keepsake Edition...in both regular and Blu-Ray formats, of course. Yours truly has also been upgraded a few times during the last seven years: I got married, bought a house, and have a daughter on the way. But you know what? I still don't like Dirty Dancing all that much, even though my disdain for it has softened a little. It's as if I brought the presents back to Whoville but chucked a few on the ride down.

Let me be clear about this: I realize that Dirty Dancing (1987) was not made with me---or 95% of the male gender, for that matter---in mind. It's a coming-of-age story about a 1960s teenager struggling to escape her well-to-do family, and she manages to do so by meeting a hot guy and learning how to dance. Throw in a handful of unnecessary supporting characters, a gallon of 1980s (and 1960s) pop music, and stir vigorously. The resulting mixture will either taste like the sweetest sugar cookie you've ever had...or just a bland lump of beige dough. Taken on its own merits, it's not hard to see why Dirty Dancing has amassed a considerable following during the past twenty-odd years: it's absolutely loaded with nostalgia for both decades, it contains a pair of decent lead performances, the choreography is great and...well, the music can be kinda catchy at times. But it's unquestionably a chick flick through and through, for better or for worse. Spoiler alert: mostly worse.

The story, written by Eleanor Bergstein, revolves around Frances "Baby" Houseman (Jennifer Grey) and her family's trip to the picturesque Kellerman's Mountain Resort. Baby loves her doctor dad Jake (Jerry Orbach), but seems to be somewhat indifferent towards her mother Marjorie (Kelly Bishop) and older sister Lisa (Jane Brucker). It's not hard to see why: Marjorie is so out of touch she may as well not be there, and Lisa is so painfully over-the-top that she'd feel more at home in The Wedding Singer. Her relationship with her dad is one of the only halfway-interesting things during the movie: they seem to respect one another despite his mild stuffiness and her rebellious moments. But it's not the father-daughter moments that carry Dirty Dancing, it's the budding electricity between Baby and Johnny Castle (Patrick Swayze), Kellerman's dance teacher. During the hazy summer, Baby struggles to separate herself from her family and get in with Johnny's crowd, but it proves to be tougher than she thought. 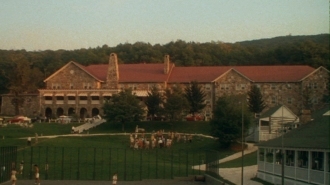 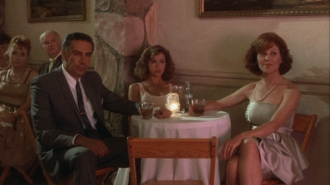 The paper-thin plot is filled with will-they-or-won't-they moments---and at its worst, Dirty Dancing is twice as complicated as it needs to be. Baby gets the opportunity to partner with Johnny on stage, but only because Johnny's original partner gets a botched abortion. Yikes. If that weren't enough, Baby recruits her dad to care for the bed-ridden young woman---and Jake quickly figures things out. The triangle, if there really is one, falls strictly between Baby, her dad and Johnny: Baby wants both men to love and respect her---and in true chick flick fashion, she pulls it off (and figures out how to dance, too!). To its credit, though, Dirty Dancing manages to deliver during this main portion of the film: our three central characters do a decent job interacting with one another, and the choreography is certainly good enough. And if that's enough for you, Dirty Dancing should sit near the top of your favorite 1980s romantic dramas.

If you're looking for more, good luck. The story's been done to death, and the odd meshing of 1960s and 1980s culture doesn't always add up. The pacing is incredibly uneven: not only does it take too long to get going, but things happen ridiculously fast...even though the last thing I'd ask for is a longer running time. Minor characters range from laughably bad to completely pointless, and often do little more than kill time between dance numbers. To top it all off, I keep forgetting that Patrick Swayze's playing a twenty-year old every time I watch this. Johnny's older appearance is more than a little creepy at times, especially due to her father's eventual acceptance. But even with a number of flaws, Dirty Dancing can be entertaining enough in the right mindset. I obviously don't consider myself a fan, but they're out there...waiting. Watching. Praying for another DVD release.

Luckily for them, Dirty Dancing now arrives in a slightly oversized Limited Keepsake Edition, which boasts a shiny new video presentation and roughly an hour's worth of new bonus features. Whether that's enough to make Dirty Dancing fanatics shell out another $25 remains to be seen, but the outlook doesn't look good. As a footnote, this two-disc release should have been called The Time of My Life Edition: between the movie, menu screens and bonus features, clips from that song are used more than a dozen times. Let's trudge through the rest of this, shall we?

Yes, it's garish in a way that most 1980s films are, but Dirty Dancing looks excellent for a standard-definition DVD release. DVD screen comparisons would be a little excessive at this point, since fans can already choose between two separate Blu-Ray releases (and I also don't have the 20th Anniversary Edition on hand). A cursory comparison of this release with 2003's Ultimate Edition shows an easy improvement in color, clarity and compression---so any way you slice it, this 1.85:1 transfer should certainly please fans of the movie. The new Blu-Ray release would be more practical at this point, but it's your call.

Unlike the video presentation, the audio hasn't been changed since the last few releases. This isn't a complaint, mind you: options include full-fledged DTS 6.1 Surround, 5.1 Dolby Digital Surround EX and a more by-the-numbers 2.0 Surround mix. The DTS track comes through loud and clear; like the 5.1 mix, it's easy to tell that this was created from limited source material, but the music cues are especially crisp and bold. Overall, it's a fine treatment that does the film's music proud, no matter if you're a huge fan or not. Spanish and English subtitles have been included during the main feature only. 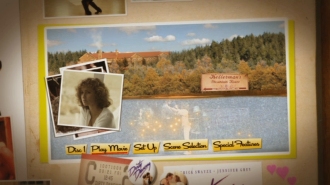 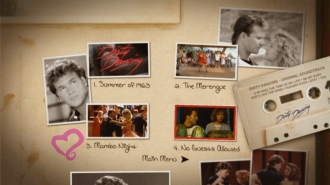 Seen above, the scrapbook-themed menu designs are basic and easy to navigate. The 100-minute main feature has been divided into 24 chapters, while no obvious layer change was detected during playback. This two-disc release is housed in a digipak case that sits inside an oversized box, which is covered in slightly more detail below. It's a cumbersome design, to be sure, but at least sturdy enough to keep the discs safe.

Bonus Features
There's a lot of overlap here from previous editions, but at least fans don't have to hang onto every other release to get the whole picture. Recycled extras include a pair of Audio Commentaries (featuring writer Eleanor Bergstein, as well as choreographer Kenny Ortega, assistant choreographer Miranda Garrison, cinematographer Jeff Jur and production designer David Chapman), a movie-length Trivia Track, a selection of Interviews with Bergstein and members of the production team, Jennifer Grey's original Screen Test, a trio of Music Videos, Tributes to late director Emile Ardolino and actor Jerry Orbach, the film's Theatrical Trailer and a TV Spot. These vintage bonus features (created mostly for the 2003 and 2007 releases) are presented in a mixture of 4:3, letterboxed widescreen and 16x9 formats, and are spread across both discs evenly.

As for the new stuff, it mostly consists of a few featurettes here and there. Disc 1 includes "Kellerman's: Reliving the Locations of the Film" (12:23, below left), which features comments from David Chapman and staff members from Virginia's Mountain Lake Hotel, the real-life Kellerman's. A few of the interviewed staff members were around when the original production was underway, so it's kinda neat to hear their retrospective remarks. "Dirty Dancing: The Phenomenon" (13:42) is a more general featurette about the movie's cultural impact; aside from a few interviews and history lessons, one particular highlight is footage from the short-lived 1988 TV series starring Melora Hardin (The Office). Closing out the first disc's new extras is "The Rhythm of the Dancing" (4:08), which focuses on Patrick Swayze's musical output during and after the film's production.

Disc 2 leads off with "In Memoriam" (1:55), a brief clip montage of cast and crew members who have passed away since the film's release. A new Patrick Swayze Tribute (15:15, below right) has been added to the other two recycled tributes, and features comments from the late actor's family, friends and colleagues. Of much lesser interest is a Fan Reel (1:42) and "James and Julia Derbyshire: Dancing Across the Pond" (4:40), where a few fans gush about the film and display their memorabilia collections. Closing out the new extras is a self-playing Photo Gallery (4:03) set to music from the movie. These new bonus features are all presented in 16x9 widescreen and look great---but like the others, they still don't include optional captions or subtitles. An unfortunate oversight, and one that many studios have been guilty of since DVD's inception.

Mentioned above, the packaging for this Limited Keepsake Edition is intended to be another bonus...but it many ways, it's more of an annoyance. A thin Hardcover Book has been included, and it's filled with cast photos, production notes and the like. Here's the problem: the two-disc digipak case and the book (along with a number of promotional ads) have been placed inside a box that's about an inch deeper than it needs to be...so it looks OK on the shelf, but it's not very practical at all. A digi-book presentation---similar to Warner Bros.' deluxe Blu-Ray releases---would've been much easier to deal with. 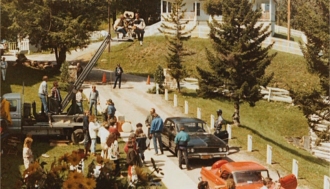 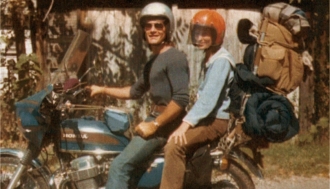 I keep trying to like it, but Dirty Dancing is still a movie with very few redeeming qualities---and though there are some highlights along the way, the rest is pretty painful to sit through. Those with a soft spot for the movie are bound to disagree...but regardless of opinion, it's easy to see that this DVD release is another carefully-timed cash grab. The technical presentation offers a decent visual improvement and some of the new extras are interesting, but that's about it---and let's be honest, those looking for a true visual upgrade may as well go with the Blu-Ray (even if they own the first release). Overall, this Limited Keepsake Edition is like the movie itself: a plain-wrap effort buffed to a glossy finish. Rent It, or just wait another three years.