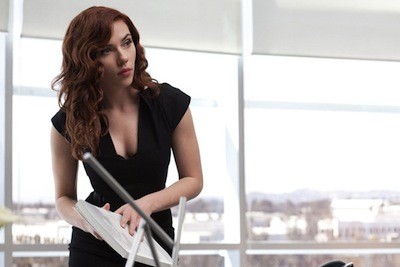 Forget what you think Iron Man 2 is about, because this sequel to the high-tech superhero action hit isn't what you expect. Though you might think it's about some overgrown boys who dress up in armor and bash each other's brains in, it's actually a touching character piece about a simple girl entering a not so simple world.

Scarlett Johansson plays Natalie Rushman, a beautiful and resourceful woman who works her way up the corporate ladder. She navigates what is ostensibly an old boy's club by her wits and her agility, and even manages to win over the one woman in power at her chosen company. Pepper Potts (Gwyneth Paltrow) is initially suspicious of the plucky young upstart, but good work doesn't go unnoticed. Natalie is not all that she seems either, the girl has surprises in store. Like she's actually Natasha Romanoff, a.k.a. the Black Widow, a badass spy who isn't there just to make her company better, but also protect its loose cannon owner, one Tony Stark.

Robert Downey Jr. reprises his role as Stark, who is perhaps best known as the titular Iron Man. I suppose its kind of his movie, too. If action films got Oscar nominations, I'd totally vote for him as Best Supporting Actor. He is a comic foil, if you will, the character who backs up Scarlett Johansson with some witty banter and the occasional pugilistic enterprise. I like him, but ultimately he's a symptom of the larger problem. The core narrative structure of Iron Man 2 is one large metaphor for the plight of modern actresses in Hollywood. Stark Industries really is an old boy's network, and so is Tinsel Town: the people who made Iron Man 2 sideline Natasha Romanoff to show you how bad it is for a spry action heroine trying to create her own franchise. Though I'd have preferred that this really were a Black Widow movie and it had more than one killer fight sequence where the ebony-clad redhead beat the crap out of some old school chauvinists, it's a bold move to sit your best player on the bench to make a point. Bravo, guys, bravo! 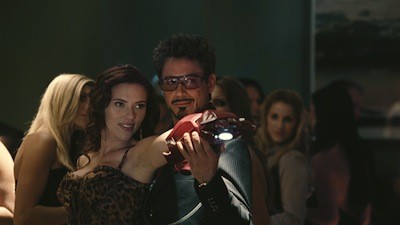 Luckily for us, what goes down while we're waiting for Natasha to get her due on the field of battle is pretty damn good. Perhaps it's not as fresh as the first Iron Man, which was the surprise hit of 2008, but it does up the ante considerably while still delivering just about everything that made the first film such a blast. The basic plot is this: Tony Stark has outed himself to the world as Iron Man, and while fending off the U.S. government's attempts to weaponize and mass produce his armor, he is also trying to find a new power source for the same armor, because the element he is using now is killing him. Meanwhile, an angry Russian gangsta physicist (Mickey Rourke) wants revenge on the Stark family because Tony's dad, Howard Stark (seen in a brilliantly cast cameo being played by Mad Men's John Slattery), once screwed over Soviet dad. The Russian builds himself his own Iron tech, thus proving the U.S. government's worst fears: that the hardware is available on the street. Tony must fend off a rival industrialist (Sam Rockwell) while also dealing with his own spiraling mood, and his pilot friend James Rhodes (Don Cheadle, replacing Terence Howard) just might suit up in one of the prototypes to become War Machine!

Got it all? Like a lot of superhero sequels, Iron Man 2 tries to pile on a lot. Last time, one Iron Man and one Iron Villain, this time two Iron Men and many Iron Villains; last time, one blonde turned into a redhead, this time two blondes turned into a redhead. (Though, you can't overdo that. I love science!) The script is by Justin Theroux (Tropic Thunder) and the direction is Jon Favreau again. The pair do a pretty decent job of not letting too much fall by the wayside. Most of the characters get a respectable amount of screen time, and there aren't any elements of the story that disappear without resolution. That said, the movie is paced a little oddly. Marvel is playing the long game for their comic book movies, and they've charged Favreau with doing a lot of set-up for their future franchises, and all the Easter eggs and asides are completely unnecessary. It's just not good when the movie you are watching stops to try to sell you one that hasn't even been made (stay through the credits, nerd!), especially when the narrative structure is already sagging in the middle. Tony Stark gets sad for a while here, and sad Tony Stark can't compare to the funny Tony Stark. It's a little like seeing evil Superman in Superman 3. No one really wants to watch him flick peanuts around at super speed, they want to see him kicking ass.

And kick ass Iron Man does! There are several action sequences in Iron Man 2, each one topping the last, building to a nerdgasm crescendo. The real accomplishment of these movies is that they have managed to create some heavy-duty sci-fi fisticuffs while still having personalities emerge from behind the masks. Robert Downey Jr. is on fire in this film, and Don Cheadle ends up being a perfect sparring partner for him. Fans of the Tony/Pepper dynamic will also be happy to hear that Downey and Paltrow once again trade barbs at a fast and furious pace. Pepper could maybe use a little more to do than be the damsel in distress, but you know, there's likely a third Iron Man being penned already, so maybe next time. Also, if they are setting up Sam Rockwell's Justin Hammer to be an ongoing villain, then I am all for it. Rockwell tears every scene in this to shreds.

Honestly, I find little here to complain about. I know there has been some grumbling amongst critics and international audiences, but as far as I'm concerned, if you liked the first Iron Man, you're going to like Iron Man 2. It doesn't exactly reinvent the wheel. As sequels go, it's not Godfather II or even X-Men 2, but it's entertaining enough that you can't accuse it of treading water. Let's just hope Iron Man 3 doesn't pull the same third-time blunder as either of those franchises, and we'll still be coming out ahead.

And let's hope they also get the balance right and give most of the scenes to Black Widow like she deserves and reduce ol' Shellhead to a walk-on cameo! 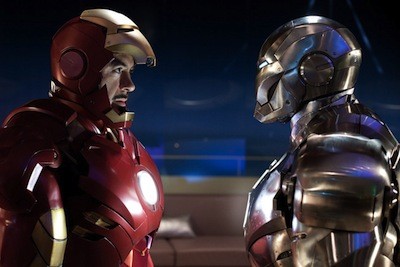