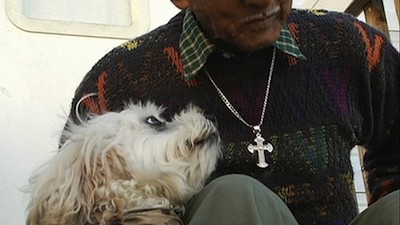 When I first saw the trailer for the new movie Babies, I turned to the person next to me and said, "I think that just drained what little battery power I had left in my biological clock," and then added, "But if it were a movie called Kitties, I'd be all over it." Yes, I am that guy. The cat guy. The writer with a feline obsession. Cliché me away!

I include this preface as indication that a movie like Mine has a built-in emotional resonance for a guy like me, and one that some people might question or find odd if they don't have a similar bond with an animal as I do with my cat. Geralyn Pezanowski's moving documentary is about all the animals that were left behind when New Orleans was evacuated during Hurricane Katrina. It looks at the rescue operations to save the pets stuck in the flooding and the complicated and often heartbreaking journey to reunite dogs and cats with their families. And I do mean families, as pets are so often true family members. When Malvin Cavalier, a man in his 80s, was told he had to go and he could not bring his best friend Bandit with him, they might as well have cut a limb off the old man and left it in the water. Another elderly woman tells the tale of how she informed the National Guard that they would have to physically restrain her if they were going to separate her from her Labrador. The Guardsman took her one way, the dog the other.

Mine is an emotionally devastating movie, one you'll want to watch with your own pet close to you and give him or her a hug or two while it's running. It's hard not to put yourself in the shoes of the disaster victims who have lost everything, and you'll marvel at the wonderful people who rushed to New Orleans to get the pets out as the water subsided. We're talking thousands of animals left behind. It quickly became overwhelming, and shelters all over the country accepted the lost creatures. Individual families also took the pets into their care, sometimes as foster pets, sometimes thinking they were fully adopting them.

Which is where the story gets complicated. You'd think it would be a simple case of the displaced returning home, looking through the databases, and finding their pet. Unfortunately, given the amount of animals and the time it took for people to get back to New Orleans, locating missing pets took Herculean-level detective work. How quickly attitudes changed following the disaster, with some people adopting the position that people like Malvin didn't deserve to get their dogs back. Other cases got sticky as families who thought they were adopting the animals for good bonded with the furry creatures and didn't want to give them up. So we get the story of Jessie Pullins trying to find his dog J.J., who was at one time in the custody of the Dog Whisperer, but has since been passed on and Jesse now finds barriers between him and the new "owners." Then there is Victor, who quickly found his pal Max living down in Florida, but he's now named Joey and living with a woman named Tiffany and her partner.

It seems so cut and dry. You think that if an owner turns up and says, "That's my dog," the babysitter would just give him or her back, particularly considering the tragedy that separated them. The fascinating thing about Mine is how Pezanoski slowly and carefully opens up the issues. While one couple gives up the fostered lab easily, others dig in their heals and the original owners have to take legal action just to gain access. At first I was angry at Tiffany for not wanting to give up Max, but as we get to know her, we realize that her act of kindness had unforeseen effects on her and her case requires compassion, as well. We see her mind changing on camera, and it changes our minds as well.

Some of the stories in Mine end happily, some don't. I got all weepy more than once during the film. Geralyn Pezanowski poses a lot of questions and pushes the audience to think about what they might do in similar situations and also questions whether evacuation methods should be altered to include family pets. It's not all sunshine and rainbows, Mine briefly touches on the abuse that many animals, especially the city's large pit bull population, likely suffered prior to the hurricane and why some shelters may have a default distrust of some pet owners. Yet, human cruelty ultimately takes a backseat. What Mine really shows us is not just the profound nature of a human/animal relationship, but how these little guys inspire us to be better people. The rescuers who went in to get them, the people who aided in finding them again, and even the lawyers who interceded on behalf of the stranded (minus that jerk in Texas, who out-jerks the Dog Whisperer)--these people got involved and took action in order to ease the pain of their fellow man. As the result of these lost dogs, new and lasting human relationships were formed.

As Jessie Pullins philosophizes, a man loves his pet because the animal reminds him he is not alone in this world. This is what a disaster like Katrina also reminds us, and Mine shows the way our best friends can lead to healing and bridging the gaps between us. It's tremendously effective in its mission, simple in its design, and yet clear in its vision. Mine is smart, never manipulative, and in the end, for all the tears it inspires, also uplifting. Have tissues ready, because this one tugs out the tears every way it can. 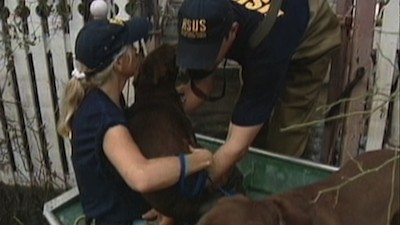 Video:
Film Movement's release of Mine has a solid 16:9 transfer. The indie documentary looks like an indie documentary, and so how scenes were shot just depended on where and when they went down. Thus, some bits naturally look better than others, but the DVD presents a consistent picture that is free of any marks or scratches and with only a touch of digital combing.

Sound:
The original audio is mixed in stereo and sounds very good. Audio problems in the source material are overcome with subtitles (and there is also full Closed Captioning.)

Extras:
Mine has been released in a clear plastic case with a double-sided cover. The interior of the cover features director's notes. 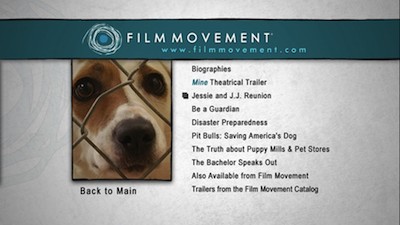 The DVD itself has quite a few extras for Mine, including material directly related to the film and some that is about larger issues of animal protection. The bonus-feature rundown:
* Biographies: Text bios of the filmmakers.
* Theatrical Trailer
* Jessie and J.J. Reunion (11 minutes): A surprising resolution to one of the storylines that occurred after the film wrapped (and four years after Katrina). A lovely postscript to one of the Mine's most compelling dramas.
* Be a Guardian (2:27): A short PSA encouraging people to adopt new language for how we refer to our pet relationships.
* Disaster Preparedness (1:37): Advice on what to do about your pet if you are hit by a natural disaster.
* Pit Bulls: Saving America's Dog (2:09) Looking at the societal problems and misconceptions about pit bulls.
* The Truth About Puppy Mills & Pet Stores (5:00): The problems of mass breeding.
* The Bachelor Speaks Out (0:44): One of the "stars" of the popular reality show does a PSA about pet neutering.

There is also some info about the Film Movement series, including trailers.

Like all Film Movement releases, Mine comes coupled with a short film, this one a 13-minute piece by U.S. filmmaker John Harden called La vie d'un chien (The Life of a Dog). This tribute to Chris Marker uses photos to tell the story of a scientist who creates a drug called K9, which for a night allows the user to transform into a pooch. This has unforeseen consequences as the world begins to taste the life of abandon as only a dog can know. La vie d'un chien is cute, with nicely composed black-and-white images, and it makes for a fun companion to Mine. Though a U.S. film, the narration is in French with English subtitles.

FINAL THOUGHTS:
Highly Recommended. Mine is a fascinating documentary that asks viewers to think about a subject that is both emotionally charged and politically complex. In the aftermath of Hurricane Katrina, thousands of household pets were left stranded, and Mine chronicle the efforts to rescue them and reconnect them with their owners and all the sticky situations that followed. It's at times heartbreaking, but overall, uplifiting. A must-see for any animal lover in your life--including if that animal love is you! 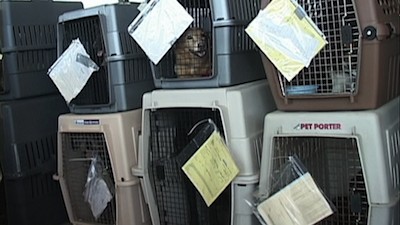