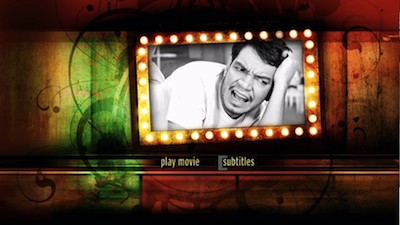 Cantinflas was a popular and prolific Mexican performer who appeared in more than 50 films between 1937 and 1982--though most of them were never released above the border. American audiences would largely only know him as Passepartout in the 1956 version of Around the World in 80 Days. He has often been described as Mexico's answer to Charlie Chaplin, and there are some parallels between Chaplin's Tramp persona and the character Cantinflas cultivates. He is a little lazy, a bit of a skirt chaser, tricky, and most of all, gentle. His humor isn't mean spirited, and the actor always stayed in touch with the common man.

The 1949 feature El mago (The Magician) was my first exposure to Cantinflas, and it's easy to see why he was so popular. The movie isn't great--in fact, I didn't honestly laugh all that much--but there is an easygoing charm in its familiar plot and the way it doesn't take itself all that seriously. Cantinflas is working for the Alter Ego Agency, a company that provides doppelgangers for people so they can perform some other function while having their own lives continue unabated. In this case, a fortune teller needs to take a vacation, so he hires an imposter to cover his business while he is gone. When the assigned imposter would rather hang out with his girlfriend, he hires Cantinflas to sub for him. Poor timing, because it just so happens that the magician is an imposter himself. He is a prince in exile, and his father has just died. Noblemen who want to restore the prince to the throne, as well as assassins who would rather see his wicked cousin rule, come looking for the prince. Of course, they mistake Cantinflas for their quarry. To further complicate things, a gang of bank robbers want to kidnap the fortune teller so he can give them information about the future that might help them be more successful, and a beautiful woman is also coming on to the prince for reasons unknown.

With so much going on in the plot, one would expect El mago to get fired up to a feverish, madcap pitch, but it never quite does. Cantinflas takes his time with the situations, ambling through the comedic set-ups. His perfomance style is full of puns and nonsense words, and the jokes actually come through well in the English translation (even if some of them lose their cultural poignancy). When Cantinflas gets in over his head, his common defense is to say a lot without saying anything, letting the people around him fill in the gaps. In one memorable scene, he does this with a man speaking French!

It's all harmless and not at all difficult to sit through. It's like cotton candy, and akin to a lot of the standard B-comedies Hollywood was also churning out at the time. Things get slightly better in the last twenty minutes when Cantinflas is whisked off to his new country. Events in El mago take a turn for the absurd, as the freshly crowned king auditions women for his private stage show as if he were grading animals. The comedian shows a real facility for physical comedy in a dance number that made me wonder where the slapstick was up until now. The closest we got was him getting drunk with the gangsters and the night ending in a brawl.

El mago is a hard movie to hate, but it's surprisingly not that easy to recommend at the same time. It is what it is. Kind of fun with a few good jokes, but maybe a little long to be this tepid. It doesn't exactly excite me enough to want to see more Cantinflas movies, which may not be good for the studio releasing this, as they are starting a whole line of the actor's comedies (and I even have another one in my review queue). I'm sure they want you to collect them all, but I can't see doing more than sampling one or two. 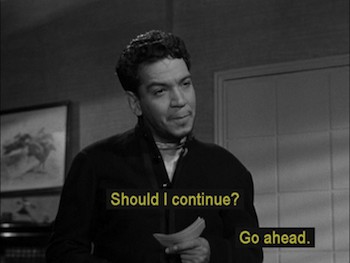 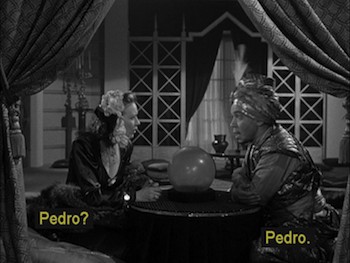 Video:
The anamorphic fullscreen (1.33:1, not the 1.85:1 listed on the box) transfer for El Mago is pretty good for a movie of this age and for a lower level release like this. The image is quality is mostly quite clear, with only a slight grain and no real instances of scratches or picture damage. The blacks aren't exactly obsidian in their depth, but I also didn't notice any hazy shadows or the like. Good job, really.

Sound:
The treatment of the audio on this disc is a bit baffling. The Spanish soundtrack is mixed in a very basic Dolby Digital and sounds just fine. There is no hiss, no problems with the tone or volume, honestly, like I said, it's just fine. But what is with the English subtitles? The only option for English speakers are subtitles geared toward the deaf and hearing impaired--meaning we get sound effects explained, and the dialogue is split on the screen between characters rather than being centered on the screen like we are used to with foreign films. The titles are in yellow, and they have a solid black background behind them, obscuring part of the picture [see screencaps above]. 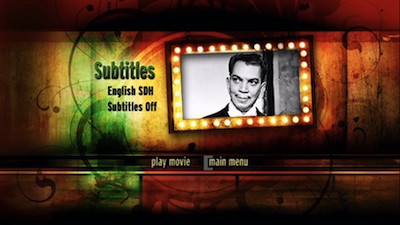 Why not normal English subtitles? What is this serving? If the studio is intent on just targeting the Spanish-speaking audience, then why Closed Caption it at all?

Extras:
None. Even the menus seem generic. The images you see in them aren't even from this particular movie.

FINAL THOUGHTS:
Rent It. No denying Cantinflas made a lot of movies and is still likely much beloved in certain circles, but if 1949's El mago is anything to judge by, this "Mexican Charlie Chaplin" got by on his pleasant personality more than riveting scripts. With a stock mistaken-identity plot, El mago is charming in its familiarity and easy to watch for its genial humor, and yet also totally unremarkable. No hate, no love, just a shrug. The odd DVD release with its lack of proper subtitles and generic packaging does ol' Cantinflas no favors, either. If the studio can't get excited about it, what do they expect from me? 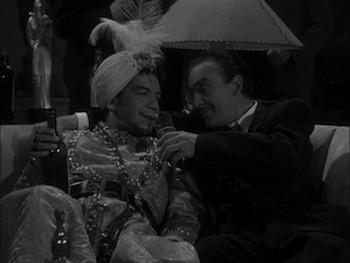 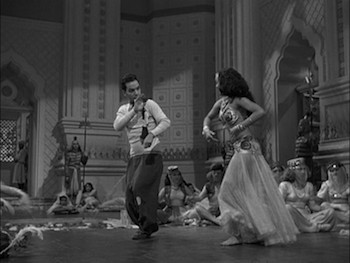