Humanoids from the Deep

Shout Factory // R // August 3, 2010
List Price: $26.97 [Buy now and save at Amazon]
Review by Stuart Galbraith IV | posted August 4, 2010 | E-mail the Author
What a difference a couple hundred extra lines of resolution makes! Having missed it in theaters when it was new, I first caught Humanoids from the Deep (1980) via (Roger Corman's) New Concorde's extremely mediocre DVD version, released during the early days of the format, in June 1999. That version was open-matte full frame and looked pretty bad: the film didn't make much of an impression.

But now comes Shout! Factory's gorgeous Blu-ray release: a 1080p widescreen transfer of the uncut international version*. Probably for this reason I really took to the film in a way I hadn't with New Concorde's DVD. The picture has a rocky history, as it was taken out of the original director's hands and retooled with graphic sex and violence shot much later by a second-unit director, which was then carefully integrated, almost imperceptively, with the older material. The original director, Barbara Peeters, was not at all happy with this and she's conspicuously absent from the disc's extra features (though she's still listed in the credits as Humanoids' sole director).

Regardless, the final release version of Humanoids from the Deep is enormous fun, albeit as an outrageous exploitation film rather than the apparently subtler, more character-driven movie Peeters was striving toward. The final version is highly derivative but entertainingly so, with elements lifted from a dozen other movies. Despite its hokey monsters - more reminiscent of The Slime People than The Creature from the Black Lagoon - it's very effectively directed, edited, and scored and impressively audacious even by today's standards, with good shocks coming every few minutes. Besides the excellent transfer the Blu-ray disc offers a very good making-of featurette, deleted scenes (in high-def!) and other extras. 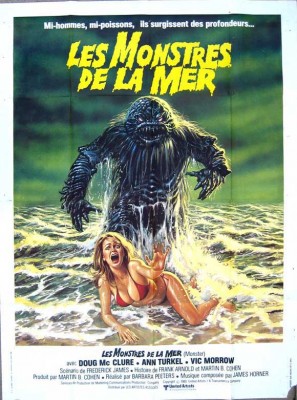 In the northern California fishing village of Noyo (which perhaps deliberately on the part of the filmmakers suggests a small New England fishing community), strange, humanoid creatures emerge from the watery depths. During the first-half of the film, the villagers aren't quite sure what's going on: people are disappearing and family dogs are turning up dead and mutilated. Unaware of the cause and in a subplot straight out of a B-Western, the strange events aggravate already tense relations between Hank Slattery (Vic Morrow, sporting an Afro and looking like the Gorton's Fisherman), leader of a group supporting the construction of a huge new cannery, and Johnny Eagle (Anthony Pena), who wants to see land and fishing rights restored to his Native American people.

Jim Hill (Doug McClure), who supports the cannery but dislikes Hank and his racist pals, investigates matters with Dr. Susan Drake (Ann Turkel). The truth eventually comes out: Canco, the cannery company, had been experimenting with growth hormones in order to increase the salmon population as well as the size of the fish. Some escaped into the wild and their subsequent eggs were eaten by frogs (Wikipedia says fish, but this is incorrect) that mutated into the horny humanoids of the title. As Roger Corman instructed director Peeters, "The monsters kill all the men and rape all the women," and that's pretty much what follows.

The film is an effective jumble of concepts. It's a bit like Halloween with Creatures from the Black Lagoon, with heavy doses of Jaws-like suspense, Alien-inspired gore (including an obvious but impressive shock-epilogue), and some Horror of Party Beach silliness. There's even a scene straight out of Them! (1954), when Susan shows Jim a 16mm film about the growth hormone and its effect on the salmon and frogs.

The movie gets off to a great start, in an excellent opening that finds a small fishing boat under attack by a humanoid. The creature gets caught in the net, the winch supporting the net breaks (as also happens in Creature from the Black Lagoon and Jaws), a child trying to fill a tank spills some gasoline before falling into the drink where he becomes the movie's first victim: the boy disappears into the blackness (via clever editing that prints one shot in reverse) as red blood bubbles up to the surface. A fisherman trying to signal for help with a flare gun is knocked off his feet, fires the gun that ignites the gasoline-soaked deck and a big explosion follows. As in this scene, for most of the movie the monsters, again as with Jaws, are never seen clearly. Later on there's far too much of the rubbery creatures, presumably mainly footage shot after Peeters's departure. This is the most obvious stylistic difference between the two approaches to the material.

It's hard to say who's responsible for the film's effectiveness: director Peeters, James Sbardellati, who was responsible for the re-shoots**, and/or editor Mark Goldblatt, but there's an obvious effort to squeeze every bit of suspense out of each situation. Goldblatt uses editing tricks similar to onetime James Bond cutter Peter Hunt: he optically manipulates some shots forward and back, faster and slower, flips others, and deletes frames during the Humanoid attacks. Peeters and/or Sbardellati make good use of "busing," a technique dating back to Val Lewton's tasteful horror films for RKO, and use the rain-soaked locations well, generating an atmosphere of dread.

For a low-budget film, Humanoids also benefits from its big studio-sounding score by James Horner, who'd soon move on to A-list productions, and some impressively gory makeup effects by Rob Bottin. Lowly production assistant Gale Anne Hurd would become one of the industry's most successful producers within just a few years.

Peeters's dismay is understandable. It was unusual if not unprecedented for Corman (or anyone else) to hire a female director for this kind of film, and there are indications that her (and the writers') original intent was a kind of empowering story featuring an assertive female scientist (Turkel) and another woman, Carol (Cindy Weintraub), the wife of McClure's fisherman, who emerge as stronger than the male leads. Instead, for all her efforts Peeters was accused by film critics like Time Out's Paul Taylor of misogyny for footage she vehemently opposed and otherwise had nothing to do with. In its defense, the rape scenes never look like anything other than guys in rubber suits jumping on naked women, and are really nothing more than a means to an end: the humanoids rip off the women's tops and in so doing satiate the picture's core audience of teenage boys.

The excellent 1080p transfer is of an uncut international version; the actual onscreen title reads Monster, with (Humanoids from the Deep) in very small font below the main title. The 1.85:1 film looks great here: excellent sharpness, good color, solid blacks. No DNR issues here, and notes in the booklet make plain Shout! prefers original film grain over digital manipulation - good for them. Spherical widescreen movies of this period often looked awful, grainy with blotchy color, but this looks just fine. The region "A" encoded disc includes adequate PCM 2.0 audio adapted from the original mono track, and with no subtitle options.

The main attraction here is "The Making of Humanoids from the Deep," which reminds this reviewer of Blue Underground's similarly excellent mini-documentaries. This 22-minute-plus feature goes into considerable detail in a short amount of time; it's unfortunate director Peeters declined to participate. Viewers doubtless would be keen to hear her side of the story. This is in 1080i/1.78:1 high-def, though for some reason slightly window-boxed. Also included are seven minutes of deleted scenes, all in high-def. The footage is in pristine condition and includes more nudity and more gore; I suspect though cannot confirm that the discarded Peeters footage is either MIA or unavailable due to clearance issues. In standard-def are trailers for this and other Shout!/Corman titles, a TV ad (cropped to 1.78:1) and radio spots. Finally, an older interview with Corman conducted by Leonard Maltin, one that originally accompanied the 1999 DVD, is also included.

Beyond the disc is another mini-booklet with a good essay about the film by Michael Felsher. The disc's sleeve is reversible, with Monster artwork on the flipside.

This is another outstanding release from Shout! Factory, near-Criterion level thought and care given to some of the most gleefully exploitative films ever made. What's not to like? Highly Recommended.

* However, at the tail end of the film is an MPAA "R"-rating certificate. What that means I do not know. Though the packaging gives a running time of +/- 82 minutes, the film itself runs 79:41.

** Both the IMDb and Wikipedia list Teruaki "Jimmy" Murakami as an uncredited co-director, but he's not mentioned anywhere in the disc's extra features.