The Criterion Collection // Unrated // August 17, 2010
List Price: $39.95 [Buy now and save at Amazon]
Review by Stuart Galbraith IV | posted August 11, 2010 | E-mail the Author
A deceptively simple and hypnotic work, Marcel Camus's Black Orpheus (Orfeu Negro, 1959) in its early scenes appears to be one of those dated art house films: historically and culturally significant but in retrospect marginal as cinema. With its Antônio Carlos Jobim score, the picture is credited with single-handedly launching the samba and bossa nova craze in North America, across Europe and parts of Asia, and its depiction of Rio during Carnaval, of idealized racial harmony and its romanticized favela (Brazilian slums, or shanty town) drew foreigners searching for a Brazil that never really existed, an image even popular and more realistic crime films like City of God (2002) can't extinguish.

Based on the Brazilian play Orfeu da Conceição by Vinicius de Moraes, which in turn was inspired by the classic Greek story of Orpheus and Eurydice, Black Orpheus builds slowly, reaching an expected fever pitch during Carnaval before moving into its unanticipated dream-like final act, a fantasy made believable and spellbinding at once due to Camus's careful nurturing of the narrative and its characters throughout. It's unlike anything in all of cinema and takes the viewer by surprise.

Criterion's Blu-ray presentation lacks the high-def jolt of The Red Shoes or Paramount's African Queen (those were in three-strip Technicolor, but still...). Created from a 35mm interpositive (IP) the image isn't as sharp as it might be, though nonetheless superior to every other home video version to date. Accompanying the film are Criterion's usual fine extras that put the film into historical and cultural perspective. 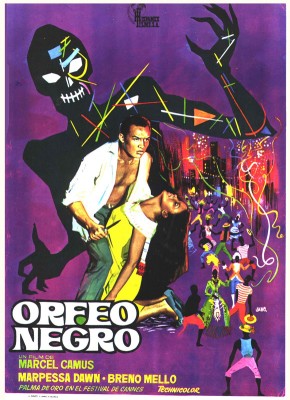 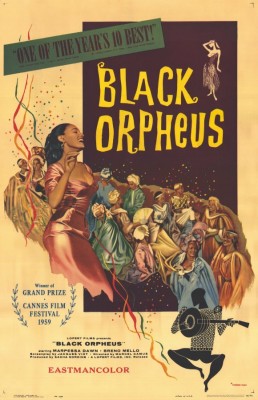 An opening shot of a bas-relief, presumably Greek statuary of Orpheus and Eurydice, is ripped wide-open like the explosive opticals in a Republic serial to reveal dancing and costumed blacks in a hillside favela overlooking Rio de Janeiro.

In this festive atmosphere of nearly wall-to-wall samba dancing and drum-beating enters Eurydice (Marpessa Dawn), who has run away from home after being pursued by a strange man she believes wants to kill her. She arrives at the shantytown shack of her cousin, Serafina (Léa Garcia), but not before meeting popular streetcar conductor Orfeu (Breno Mello), a handsome, incorrigible womanizer, whose guitar playing, dancing, and singing are well known in the community.

Orfeu is engaged to jealous Mira (Lourdes de Oliveira) but at once he falls madly in love with the more cautious Eurydice. They spend the night together and the next morning, as Orfeu, Mira, Serafina, and the rest of their samba school prepares to dance in the Carnaval parade, Serafina offers to let Eurydice take her place so that she can be near Orfeu. A veil hides her identity, but not for long and Mira is infuriated. Meanwhile, the mysterious man, dressed in a stylized skeleton costume, appears and begins stalking Eurydice, who by this point is convinced the man is Death itself.

Black Orpheus was, chiefly, a French and Italian co-production that received cooperation from a Brazilian production company. As such it's predominantly told from a French, not Brazilian perspective. Even now general audiences aren't likely to pick up on this, many mistakenly thinking the film Brazilian, not mainly French. It's certainly not like any other French film of the late-1950s or much like the tiny handful of Brazilian films this reviewer has seen. Instead, watching it I couldn't help be reminded of the Good Neighbor Policy films of the early- and mid-1940s, in particular Orson Welles's tragically lost It's All True (1942), which this in many ways resembles. In any case audiences outside of South America would in 1959 have had no way to know this, and besides the film's humanism, its positive and matter-of-fact depiction of Rio's black culture, must have been revelatory to American audiences especially. How humbling to see this mostly joyous, interracial jumble of film only to go home to network news reports about violent Civil Rights clashes in the Deep South.

Though it won the Palm d'Or at Cannes and, eventually, the Academy Award for Best Foreign Film, Black Orpheus received much criticism in Brazil, where many were offended by its inaccuracies about favela life, and in France, where it was seen to have no place in the emerging New Wave movement. But its influence was enormous, almost too big to measure. Music from the film - including two standards, "Manhã de Carnaval" and "A felicidade" - was played all over the world while the film's influence turned up in the unlikeliest of places. For instance, Death's stalking of Eurydice during Carnaval was undoubtedly a major influence on the similarly staged Junkanoo sequence in the James Bond film Thunderball (1965).

But as Brazilian cinema scholar Robert Stam points out in one of the disc's many extra features, the music that so dominates the film was itself authentic and compensates with its verisimilitude, ultimately more real than the stylized, better-regarded stage production.

The cast of mostly inexperienced actors is excellent with unusually good child actors in important parts, and especially appealing leads. Breno Mello was a soccer player (and he shows us just how good he is in one brief scene where he kicks the ball around with some kids) while Marpessa Dawn, the only non-Brazilian in the cast, was a Pittsburgh-born dancer who moved to France at an early age. Amusingly, one of her few film roles prior to this was as a native girl sacrificed to the Womaneater (1957), an incredibly inept horror film, a kind of British Plan 9 from Outer Space. You've come a long way, baby. She and Mello died just days apart almost exactly 50 years after they were cast in the film that would immortalize them.

Presented in its original 1.37:1 full-frame format, Black Orpheus has pleasant color and is overall a big improvement compared to earlier home video versions, but it's still quite a ways off from the label's best titles in terms of sharpness and detail. Criterion seems to have put a lot of effort into minimizing the source element's inherent flaws, though color pulsating issues are visible around the 51:30 mark. Generally though, a pleasing if not ideal presentation. The uncompressed mono audio is likewise fine. In addition to the original Portuguese, a surprisingly good English-dubbed track is also available. Where and by whom this was done is impossible to say, though I thought I recognized Roscoe Lee Browne as the voice of Death during the 10 minutes or so I listened to. The disc is region "A" encoded.

The lengthiest supplement is the French-made documentary from 2005 called Looking for 'Black Orpheus', which runs nearly as long as the movie itself. It starts out fantastically well, featuring then-and-now visits to the film's various locations and interviews with Camus's Rio-based assistant director and, delightfully, Breno Mello and Léa Garcia. However, the show veers off course with long discussions about the Brazilian music scene today, non-profit dance schools for local children, etc., and in the end coming off more like El Sistema than a documentary about Black Orpheus.

Better is scholar Robert Stam's clear and concise discussion about the film's reception, negative and positive, and its place in Brazilian society and world cinema. Jazz historian Gary Giddens and author Ruy Castro do likewise in their talk about the music. Camus and Dawn appear in archival interviews, the former footage appearing in clip form in the longer documentary. A lengthy trailer turns out to be for the film's Brazilian, not French release and is subtitled. It is, like everything else, in high-definition. The full color booklet includes an astute essay by Michael Atkinson.

Another must-see from Criterion, the quality of the film and the extra features compensate for an okay but unremarkable transfer of this unique work. A DVD Talk Collector Series title.