"And lo, the consumer looked upon the disc of beauty. And it stayed its hand from upgrading. And from that day, it was as one dead."


And so, once again, The Question: Do I stick with my perfectly fine DVD of King Kong (1933), whose two-disc special edition from 2005 was one of the year's best releases - Hell, one of the best DVD releases ever. Or do I upgrade to Blu-ray? It's a wonderful movie, sure, a masterpiece, but it is nearly as old as Clint Eastwood. And those screen grabs over at DVD Beaver didn't look all that hot, either. And besides, the extra features are identical to the November 2005 release, though a couple of things have been bumped up to 1080p. 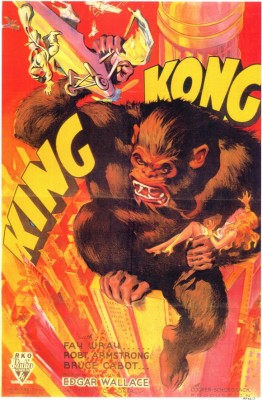 The famous story: Fearless showman and film director Carl Denham (Robert Armstrong), who specializes in thrilling documentaries filmed in exotic locales, begins a top-secret ocean voyage to uncharted waters and Skull Island, home to a legendary monster-god the local natives call "Kong." Along for the ride is Ann Darrow (Fay Wray), a homeless, half-starved victim of the Depression that Denham - conceding to the public's demand for a love interest - hopes to fashion into the "beauty" of his film about the "beast," Kong. But Denham doesn't anticipate that hard-nosed First Mate Jack Driscoll (Bruce Cabot) would fall in love with Ann, and in so doing question the danger Denham's willing to subject her to, or that the natives, mesmerized by Ann's golden hair and fair skin, would kidnap her and make her their sacrifice to Kong.

That King Kong is one of the all-time great movies goes without saying. It's been written about so exhaustively the observations and platitudes contained in this review are hardly new. But it's worth pointing out a few anyway for those who've not yet seen it. And there are, apparently, lots who still have not, including the friend I watched this new Blu-ray with.

Superficially, King Kong is remembered for its ground-breaking special effects, mainly the stop-motion animation used to bring to life Kong and Skull Island's array of lost world dinosaurs. By today's standards, this stop motion and many of the other effects - stationary and traveling mattes, glass shots, rear-screen projections, etc. - is crude and from a purely technical standpoint unconvincing.

And yet dramatically, in terms of integrating the first unit live action footage with the special effects to create dynamic action, to create an iconic screen character from metal rods and rabbit fur and rubber, and infusing it with such rich personality that for all intent and purpose it becomes real and alive, King Kong has never been bettered.

The special effects, so perfectly realized and integrated - how 1933 audiences must have responded! - are still enormously powerful all these years later.

But as overwhelming as the picture's special effects are, King Kong's greatest asset is its ingenious screenplay, highlighted by what might very well be the most perfectly structured script in Hollywood history.* And then there's Max Steiner's innovative musical score, which is at least as important as those eye-popping visuals. With lesser special effects King Kong might still have been a great film, but even the photo-real CGI we have today can't save a lousy film, as most nearly every high-concept blockbuster emanating from Hollywood these days depressingly proves.

In high-definition King Kong has one big problem and about a hundred plusses. Apparently, most of the original camera negatives of the RKO library - holdings that include such classics as the Astaire-Rogers musicals, Citizen Kane, Val Lewton's horror films, and lots of great film noir - no longer exist, and that transfers today are derived from second generation (and beyond) film and sound elements. For that reason, RKO titles tend to look grainier, less detailed, and more ragged on home video. The first-half of King Kong falls into this category, but for whatever reason, at least to my eyes, the image gets a big bump in detail around the time Kong breaks through the natives' giant wall, and looks outstanding all the way to the end of the film. (Scenes long censored from Kong's myriad reissues were later restored but always appeared ragged as well; these bits now look as good as the rest of the film.)

But even if that weren't the case the 1080p sharpness - yes, of even these second-generation elements - give this Blu-ray a definite edge over its DVD predecessor. For one thing the 1.37:1 framing in 1080p (pillar-boxed on 16:9 TVs) provides more picture information than the full frame DVD, especially important in the case of King Kong because throughout the second-half of the picture are shots of Ann or Jack Driscoll matted into stop-motion Kong footage, the human actors usually lingering around the very edges of the frame.

Wide shots also markedly improve. The introductory scenes with the natives have more impact because the natives' faces are more discernable, and because that great wall dividing the village from Kong Territory is more textured, more ancient looking.

The restoration combined with this precision transfer also maximizes the optical effects. The various components of effects shots - the glass paintings, the stop motion figures, the live actors matted into the action - are better balanced and require much less suspension of belief. Some scenes look so good as to be almost astounding, such as Kong's later-reel attack on the elevated train in Manhattan. Not only do all the elements come together perfectly, but the rich blacks of this nighttime scene add enormous atmosphere. Some of the glass and stop-motion miniature shots take on an almost 3-D quality akin to Disney's later multi-plane animation camera.

Audio has been remixed for DTS-HD 1.0, though a Dolby Digital 1.0 track is also included, as are audio options in Spanish and Portuguese, as well as subtitles in all those languages plus French.

Supplements are pretty much identical as the 2005 DVD release, though two very entertaining and informative featurettes, "The Lost Spider Sequence" and "Creation Test Footage, have been bumped up to high-def. Historian Rudy Behlmer also packs a lot of Kong's history and puts it into context in the accompanying 32-page booklet, which is beautifully illustrated in full-color.

Returning extras include a two-hour (!) and forty-minute (!!) documentary called RKO Production 601: The Making of Kong, Eighth Wonder of the World. For the record that's about an hour longer the movie it documents yet well-worth sitting through. I'm Kong: The Exploits of Merian C. Cooper, running just under an hour, is also excellent. Also included is a commentary track with stop-motion giant Ray Harryhausen and Ken Ralston, with Fay Wray and Cooper heard in archival recordings.

It's almost like Blu-ray's deep, dark secret: Good high-definition transfers can enhance old black and white movies as powerfully as the latest blockbusters. While the film elements that survive on King Kong can't compete with, say, the pristine-looking Casablanca (1942) or even VCI's transfer last year of the Alastair Sim Scrooge (retitled A Christmas Carol for its U.S. release, 1951), the advantages of the format impressively squeezes out a vividness and immediacy DVD just can't provide, and an image that comes extraordinarily close to film rather than video. A DVD Talk Collector Series Title.

* Reader Jeffrey Nelson adds, "Well, except for one pesky issue...crazy how they seem to forget all about those handy gas bombs after Kong gets loose in the Big Apple, ain't it? After all, on Skull Island, Denham knocks Kong out with a single bomb thrown by hand at POINT BLANK RANGE, yet he didn't perhaps think of having a stash of 'em handy at the Radio City Music Hall, ya know, just in case them 'chrome steel' chains didn't hold?"