Blue Underground // Unrated // September 21, 2010 // Region 0
List Price: $29.98 [Buy now and save at Amazon]
Review by Stuart Galbraith IV | posted September 21, 2010 | E-mail the Author
Vigilante (1983) is a generally uninspired if well made Death Wish knock-off, the kind of film where its cast and crew are doing good work but with a script beneath their abilities. Star Robert Forster gives an excellent, subtle performance, the great Woody Strode makes a welcome appearance, and both William Lustig's direction and the film's general approach is, all things considered, surprisingly restrained. But it's an undistinguished, forgettable throwaway, neither as thought provoking and morally ambiguous as the first Death Wish movie (released in 1974) or as enjoyably stupid and over-the-top as that film's four sequels.

Blue Underground nevertheless hits another one out of the park transfer-wise. Filmed in Panavision on a very modest budget, Vigilante looks outstanding in high-def, striking the perfect balance of film grain and 1080p/2K clarity. The extra features pretty much duplicate the 2002 DVD release, which itself included a commentary originally recorded for a 1995 laserdisc release. 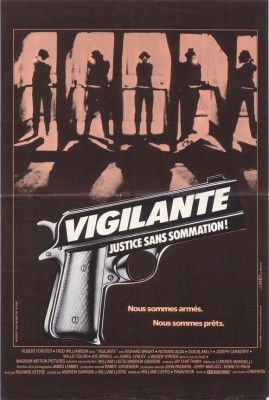 The story is extraordinarily simple (mild spoilers): Set in New York, the film traces everyman machinist Eddie Marino's (Robert Forster) transformation from upright citizen to determined vigilante after his wife (Rutanya Alda) and toddler son are murdered by street punks. Despite the best efforts of the local assistant district attorney (Carol Lynley) the gang's leader (Salsa star Willie Colón) gets off scot-free, thanks to his corrupt attorney (Joe Spinell) and a corrupt judge (Vincent Beck). When an understandably outraged Eddie lunges at the bribed judge, the new widower is sentenced to 30 days in the slammer.

Meanwhile, Nick (Fred "The Hammer" Williamson) is the leader of an underground vigilante group whose members include co-workers of Eddie's. Though initially he resists their invitation to join their band and go after the scum that murdered his family, Eddie's experiences in prison - including an attempted rape - finally push him over the edge. (Strode, playing an old but still imposing lifer, makes a strong impression as Eddie's protector.)

Despite the usual salacious hype from Blue Underground, in this case promising a "savage urban action thriller ... [transferred] from the original uncut and uncensored camera negative!" in fact Vigilante is pretty restrained throughout, as if everyone was striving toward something better than the usual 42nd Street sleaze. Most of the attack on Eddie's wife is off-camera, and though the murder of their little boy is quite disturbingly staged, the actual murder is basically off-camera also. Except for one necessarily brutal sequence, a raid by the vigilantes at the gang leader's apartment, where things go terribly wrong and the brutally on both sides is graphically depicted, Vigilante is almost tame by today's loose standards of acceptable violence. It's certainly less brutal than Charles Bronson's more violent vigilante films of the period (e.g., 1982's Death Wish II and the genuinely repellant The Evil That Men Do, 1984) and almost comparable to what turns up today on police procedural TV series in both Britain and America.

Forster, a busy but much-underrated actor perhaps best known today for his outstanding work in Tarantino's Jackie Brown, gives the kind of performance where you can read the complex, conflicting emotions on his sympathetic, everyman face. Williamson is similarly effective, wisely restraining his more familiar, more colorful established screen persona, though he ostentatiously flashes his trademark cigars in several scenes.

For a modestly-budgeted exploitation film, Vigilante is more polished than you'd expect, with direction and cinematography (the latter by James Lemmo) stylistically more in line with an A-list studio film from ten years earlier.

The excellent transfer helps a lot. Vigilante is one of the best-looking filmed-in-35mm anamorphic titles I've seen on Blu-ray so far. Presented in 2.35:1 widescreen, the transfer has strong blacks and a very pleasing level of grain and without resorting to any visible DNR. The sound is more problematic: remixed for 7.1 HD-DTS Master Audio and 5.1 Dolby Digital Surround EX, the directional audio and explosive bursts of music are ideally suited for those viewers who don't have to worry about waking up the neighbors next-door or three-year-olds asleep upstairs. In my case at least, I found myself constantly adjusting the volume between the mixed-too-low dialog and loud music and effects tracks. Dolby Surround 2.0 tracks are available in French, German, and Italian, along with optional English, French, Spanish, and Portuguese subtitles. The disc is D-Box motion encoded and region-free.

The lone new extra feature appears to be the first of two commentary tracks, the new one featuring director William Lustig and co-producer Andrew W. Garroni, who discuss in detail the process of shooting pictures at this budget level. It's an interesting and informative track. The older laserdisc commentary features Lustig, Forster, Williamson, and Frank Pesce (who plays "Blueboy" in the film). Also included, in standard-def, is a promo reel intended to raise production funds for the film, and which essentially became Vigilante's opening scene. The background for this, helpfully explained in a text prologue, is amusing. Myriad trailers, TV and radio spots, and a still gallery round out the extras. Only the U.S. trailer is in high-def.

Neither fish nor fowl, Vigilante is better than the usual film of this type, but isn't particularly distinctive, either, despite some fine acting and good direction and cinematography. But Blue Underground's presentation is excellent and therefore marginally Recommended.